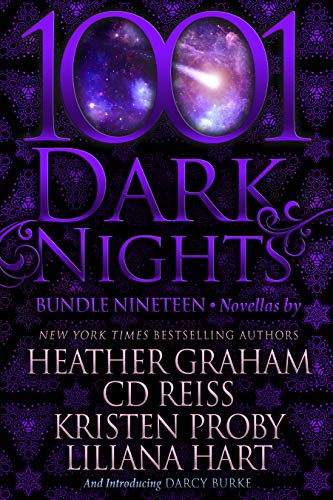 HALLOW BE THE HAUNT: A Krewe of Hunters Novella by Heather Graham
Years ago, Jake Mallory fell in love all over again with Ashley Donegal—while he and the Krewe were investigating a murder that replicated a horrible Civil War death at her family’s Donegal Plantation. Now, Ashley and Jake are back—planning for their wedding, which will take place the following month at Donegal Plantation, her beautiful old antebellum home. But Halloween is approaching and Ashley is haunted by a ghost warning her of deaths about to come in the city of New Orleans.

PRINCE ROMAN by CD Reiss
Rules for my new job:
1) Do not have sex with a man in the office (again).
2) Do not break Rule #1
I’m playing it cool, clean, and professional…until I meet Roman Bianchi. He’s not an insecure nerd or an ego-hole like the other kings of Silicon Valley. He’s charming and handsome. He’s fun, funny, and smart. He’s also in the office across the hall. Two broken rules waiting to happen.

NO RESERVATIONS: A Fusion Novella by Kristen Proby
Chase MacKenzie is not the man for Maura Jenkins. A self-proclaimed life-long bachelor, and unapologetic about his distaste for monogamy. Chase has one strict rule: no strings attached. Which is fine with Maura because she doesn’t even really like Chase. He’s arrogant, cocky, and let’s not forget bossy. But when he aims that crooked grin at her, she goes weak in the knees. Not that she has any intentions of falling for his charms. Definitely not. Well, maybe just once…

DAWN OF SURRENDER: A MacKenzie Family Novella by Liliana Hart
Cole MacKenzie is content to be the sheriff of Surrender, Montana, but he’s needed for a greater purpose. The United States needs a U.S. Marshal with a certain kind of experience to track the leader of the notorious Silver Creek Bandits. The leader is smart, cunning, and ruthless. And he's also his brother. Elizabeth MacKenzie never dreamed she’d marry Cole MacKenzie, but thanks to her father’s meddling, Cole was hers to have and to hold. Forever. If only he loved her.

SO GOOD by Darcy Burke
Cameron Westcott has spent eight years recovering from heartbreak by keeping romantic entanglements casual and simple. He’s never minded being called a player, but after two years immersing himself in his new winery, he might be ready for the next chapter. Especially when he meets a sexy wine distributor Brooke Ellis.

Five stories from some of my favorite authors bundled together. I love 1001 Dark Nights Novellas and these were so good!

HALLOW BE THE HAUNT: A Krewe of Hunters Novella by Heather Graham

Getting ready for Halloween and their upcoming nuptials, Jake and Ashley are sucked in to trying to solve a murder that is similar to one that has happened years ago. While Jake tries to hunt the murder, the victim’s ghost reaches out to Ashley to warn her that more deaths will come if they don’t stop them in time. Full of suspense, mystery and lots of heat, five stars to another Krewe story. Glad to see the crew.

Roman Bianchi is beyond tempting but that temptation comes with a price. An office romance can blow up in Raven’s face. Already coming off from one relationship, she’s not ready for another. But Roman is irresistible and the chemistry between the two is explosive.  Four stars for a solid story but the ending was a little more open than I would like. NO RESERVATIONS: A Fusion Novella by Kristen Proby

A blind date with Chase MacKenzie is not how Maura Jenkins thought she was going to end her night, especially when they but heads. Neither one of them are looking for a relationship, but some no strings sex is just up their alley. But as the two become more intimate, they can’t help having feelings for one another. Four stars for lots of heat.

DAWN OF SURRENDER: A MacKenzie Family Novella by Liliana Hart

A Mackenzie family prequel of sorts, sexy Sheriff Cole MacKenzie and his beautiful wife Elizabeth are about to get their worlds turned upside down when a gang of bandits come to their town. Having married for convenience sakes, Elizabeth has been in love with Cole since she was a young girl but unsure of her husband’s feelings, these bandits are about to put their marriage to the ultimate test. I LOVED this story and the series. A novella that packed a lot in; heat, drama, gunfights and sexy cowboys. I didn’t want it to end. Five stars, I could easily read more.

SO GOOD by Darcy Burke

Wine and romance bump heads in this novella. Brooke is a wine distributor and Cameron is now part owner of a winery and instantly attracted to Brooke. But Brooke is wary of mixing business with pleasure, especially with Cameron and his reputation as a player. Thus begins a yo-yo romance of “I want you but I don’t want to want you but I really do, but I don’t” page after page. This one dragged for me but it was an ok read. Three stars.