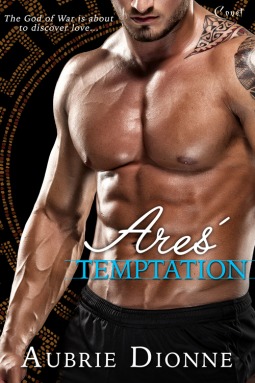 At the wedding of two Greek gods, Kaye Underhill is the only mortal in a sea of scantily clad nymphs and fickle satyrs. And worse —she’s dateless. The only bright side is the hot, muscled hunkiness of the God of War, who’s seated next to her. But there’s no way Kaye could ever grab a god’s attention…Is there? Ares is in big trouble. A vengeful witch curses him, and the first person he touches will steal his strengths, while he receives their weaknesses. When Kaye trips, Ares catches her and poof! His powers disappear, and Kaye suddenly has the strength and coordination of a Greek god. To break the curse and regain his powers, Ares must get Kaye to fall in love with him. But for the god who makes war, making love presents a whole new set of problems…

I tend to gravitate towards books having to do with Mythology, so when I saw that this was about the God of War, I had to read.

Kaye Underhill is at the wedding of two Greek God’s, her friend String and Pan from another book Pan’s Conquest, and is also the only mortal in the room. This would be daunting enough except she is also without a date and is sitting next to the very hunky Ares.

Ares is intrigued by the mortal woman next to him but has other things to worry about. Hekate, a witch with a vendetta was up to something. He learns quickly what, when she curses him to absorb the weakness of whoever he touches next and they, in turn, would absorb his strength. The only way to break the curse is to make the other person fall in love with him. Before he can leave the wedding and try to find a way out of the curse, Kaye trips and he catches her.

Curse Activated!! This is where the story gets pretty funny. Kaye starts gaining his strength and has a desire to swing a sword and watch violent war movies. He in turn is trying to find a way to learn how to act and speak like a mortal while trying to win her heart but without Kaye ever knowing why, as per Hekate’s curse.

My only problem with the book is that it is actually turns into a very sweet read. The romance is super light and for a book published by Entangled, I was expecting heat. The other thing is, he’s the God of War!! I was expecting major passion, even some level of Dom in him. And while I’m glad he turns into a sweet guy and ends up with genuine feelings for Kaye, I expected more romance. I can understand how he didn’t want her to feel that he was using her just to get his powers back but a passionate scene once it was resolved would have been nice.  And honestly, I expected Ares to be more of a badass at least. It’s great when it gets to the action in the end but it’s fairly brief. 4 stars for a sweet read, 3.5 for the romance.