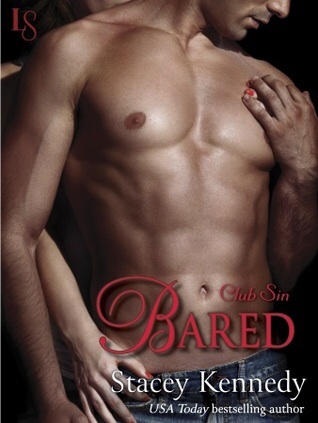 In a novel that’s perfect for fans of Fifty Shades of Grey, Stacey Kennedy returns to Club Sin with another wicked and wild tale of submission, seduction, and love.

A fantastic second book into the world of Club Sin. Here we finally get Cora and her Dom Aiden story and wow this was hot. Cora has secretly been in love with Aiden and has waited patiently for him to open his eyes and see her, not just as his submissive, but also as his woman.

“The protection he offered, the comfort he gave, and the connection that was so intense would always be illusion.”

Aiden, still struggling over his grief over losing his love and last submissive Lily, refuses to see Cora’s feelings for him. This, in turn, begins to make Cora see that maybe he’ll never feel the same way that she does for him and the ghost of Lily is much stronger than she thought and she starts to pull away from him. She knows that once she confesses those feelings to him, things will never be the same. At first, I didn’t understand why she held back from telling Aiden her feelings. It was so frustrating to me and I thought it was just to have a build up to the something more. Then I realized that she was protecting him and how strong of a character she was. To love someone so deeply and not be able to say anything, reading her struggles, just made me love Cora more.

Aiden senses her pulling away and begins trying everything to get Cora to talk to him, not knowing why. Although he feels strongly for Cora, he sees it as a Dom caring for his submissive. I so wanted to hit him so that he would open his eyes. He didn’t even realize how much he was letting his past affected him until he almost loses Cora.

All that said and done, I loved the book. The scenes were very hot, the plot and dialogue flowed and before I realized it, I was done and should have been well on my way to dreamland since it was 2am and I had work that day. I can not wait for the next book.