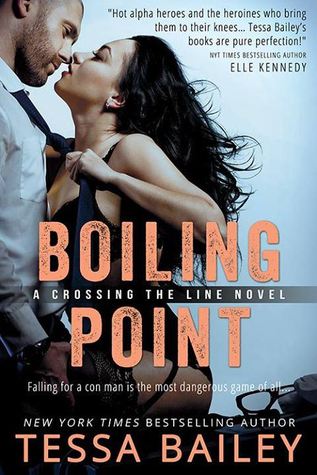 Con artist Austin Shaw’s been in disguise so long he’s not sure where his fake identities end and he begins. Now that he’s been strong-armed into working for a specialized undercover unit working with the Chicago police—criminals with unique “skills”—the last thing he needs is to risk his iron control. Especially when it comes to a certain stunningly sexy hacker who tempts him with every look of disdain.

Polly Banks will never, ever trust a con man. On the trail of a ruthless crook who destroyed the only family she’s ever known, Polly is unnerved by the shadow who follows her every move. The one who makes her pulse pound and breath short with lust. Austin. He’s infuriating, enigmatic, and pure sex appeal, and she’s determined to resist him.

But an untrustworthy man of disguise can become anyone he wants…including a man that Polly must trust if she’s to escape their dangerous game alive.

*ARC provided via NetGalley in exchange for an honest review.*

Boiling Point is the third book in Tessa Bailey’s, Crossing the Line series, and while this can be read as a stand alone, I loved the first two books and I think you get a deeper sense of the relationship between all the characters and the story behind how this rag tag bunch of misfits came together. They’ve each got very shady backgrounds and make a deal with Chicago PD to us these skills. Who better to catch the bad guys than some reformed ones? Sort of reformed, anyway. You also get to see Polly and Austin butt heads in the first two, which is very funny. She is fighting her attraction for him while he’s ready to get this show on the road.

“Goddammit, he’d never felt an ounce of possessiveness over another human being in his thirty-one years. But just then, he wanted more than anything to walk up behind Polly, wrap an arm around her hips, and drag her back against his lap.”

Austin is a master of disguise, a con man, a grifter. He’s also a very charming Brit that had me grinning with his wit and fanning myself with his dirty words. This author really is a master of the dirty alpha heroes. In this case, however, Austin is quite a bit different. While he is an alpha, he’s also very willing to be submissive to Polly and to give her a level of control she needs. Honestly, when I first thought of a submissive hero, I wasn’t sure if I would like him. Would he be too submissive for me? Would I be turned off by it? Not in the least. I should never doubt Tessa Bailey. Damn it Austin, I totally love you! Those scenes were blisteringly hot! I just kept hearing one of my favorite scenes in a show where one of the characters kept going “Dirty boy. Dirty dirty dirty.”

“Your orgasms belong to me.”

There is so much more behind Austin and his disguises and there was a little twist that I didn’t see coming for this character until I read the ending of the second book and the lead in to Boiling Point. Ack! The joy that I had reading this book. I loved Polly as well but Austin totally stole the show for me.

I do love the fact that we get introduced to a new character that joins the group which means another book in the series. Yay! More joy. Now to impatiently wait for the next masterpiece to arrive.

Check Out the Other Books in the Series