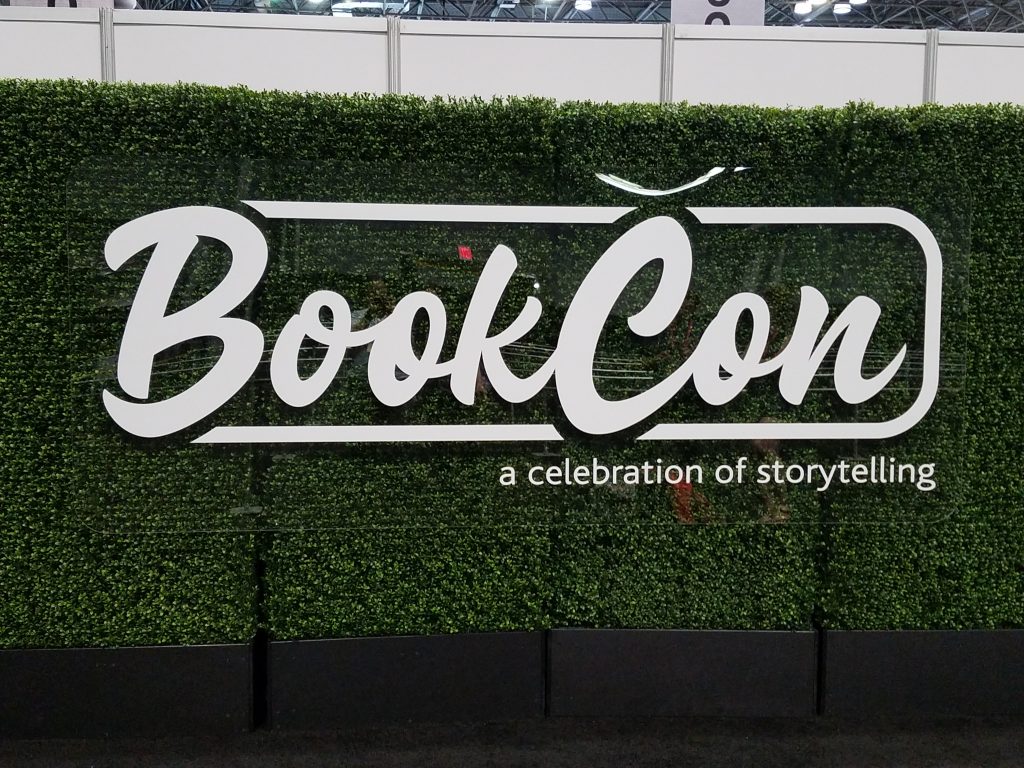 I won’t lie and say that my first write up of the con wasn’t just an epic rant of how bad it was. After going to BookCon for the last five years, I have to say that each year brings a lot of high points in my excursions and very few lows. This year, going in with high expectations, was probably the worst year I’ve had, to the point I really don’t know if I want to go back. As a person who doesn’t just love to read but also actively reviews, it was not a good experience to go home with only a small handful of books from a convention that you used to come home with bags of them.

Let’s start with some high points. I actually won a Breakfast with Authors hosted by Riveted from Simon Teen which included Cassandra Clare! That was such an awesome moment for me because I have wanted to meet her since the first Mortal Instruments book. It was a great morning because we got to chat with each of the authors for a few minutes but it went by so fast. Jenny Han was so cool talking about the Netflix movies and I loved hearing about Margaret Rogerson and Cassandra Claire’s writing process. At the end, we got a bag of books that included one book of each of the author’s plus a bonus book, Cursed by Frank Miller and Thomas Wheeler! Score! I honestly thought I was going to have to sell a kidney to find the book at the con. Most of the books were autographed except for the Cassandra Clare book which, not going to lie, I was very sad about, but I guess I will have to keep trying. 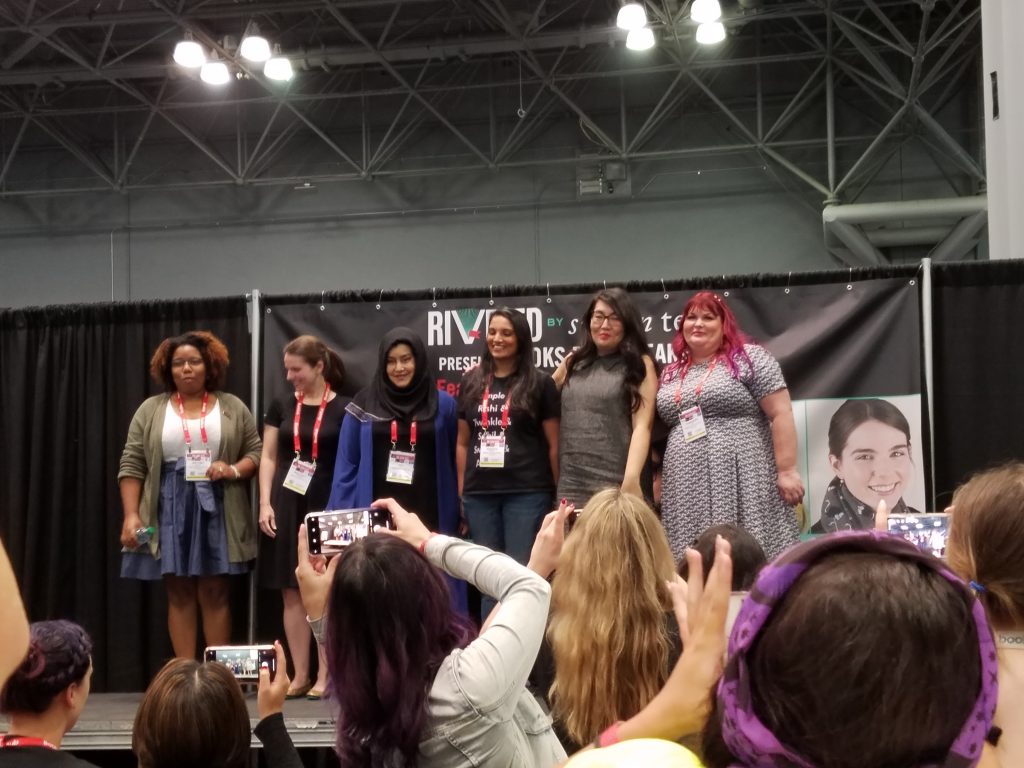 The great thing about the breakfast is that we got on to the show floor an hour and a half before anyone else and got to see a very empty show floor and all the books on display. It also gave me a little bump up when I was able to get to the Macmillan booth to get my ticket so I can get my ARC copy of Burning Shadows by Jennifer Armentrout later in the day, which was my number one must have reads at the Con. I’ve read all her books and the Lux series is still one of my favorites.

Here’s where everything goes downhill, and the blame is heavily on the publishers here, not so much on ReedPop or Javitt’s. I had a VIP ticket and they thankfully moved the bag drop to the front by the staircases so it was much easier to drop off books. I went to the con with a list of arc’s and books I was looking for and while the app and the website wouldn’t sync (they never have and never will), I was excited to get some books, even knowing I will be shoved around by overeager book goers.

There were lots of ARC drops scheduled for Saturday and a lot less for Sunday and some publisher’s decided, some at the last minute, that to get the books you needed a ticket. This is both good and bad. It’s good once you get a ticket because you’re not hovering around for an hour or two where you are trying to get a book. You can do other things and 15-20 minutes get on line to get your book. If you don’t get your tix though because you don’t get there fast enough, you’re sort of screwed, especially if it’s a book that you really, really wanted. You also lose the chance of discovering a new book or author. In years past, we were able to walk up and down the aisles and check out books from authors we’ve never heard of because publishers would wave you over and want you to check out the book and get on their line. I can’t tell you how many of my favorites were discovered that way. That aspect of the con, the discovery, is what makes it worthwhile for me and my friends. I want publisher’s to get me excited over a book and author I’ve never heard of before.

This year, we were shooed away like annoying insects even if all we were trying to do was look at what book they were signing. I had so many books that I went specifically to look for and the fact that I could only get on two lines to get two book autographs for ARCs is mind boggling to me when last year, I got so many. The worst part about all the ticketed events is that some of the publishers messed up big time, handing out more tickets than they had books. That is a HUGE mistake and people were extremely angry over it. A ticket should have at least guaranteed you a book but not in this case.

It was quickly apparent to me and so many others that the publishers had significantly decreased the amount of books that they had to give at BookCon. On Sunday morning I went for an ARC dropping at 10am. The doors opened at 9:55am, I got to the booth at 9:57am and the line was already capped with about 30 people on it. You mean to tell me that you had 30 books for a con filled with a few thousand readers? Publishers even had people make lines to get things like an ARC sample which are already up on their website. At one point I made a line and all they had were some buttons. By Sunday afternoon, I was determined to get at least one book that was on my list of must haves. Sourcebooks was having a 1pm ARC drop for a random YA Thriller (one of my favorite genres) so I hovered around beginning at 11. At 11:45, they began forming a line and I was 30th. By the time 12:15 came, the line wrapped multiple times and they began giving out bags at 12:30 instead of 1pm. Basically for almost two hours, I did nothing but wait on a line. I couldn’t check out other books, I couldn’t buy stuff, and I couldn’t go to my autograph session. I had two panels I wanted to go to, and one required a ticket and the other had people lined up two hours before so I could not get to either one of those either.

This year was such a huge letdown because honestly, the publishers made me feel like an annoyance and that’s not a good feeling. I spent so much time either trying to get on a line, trying to find the right line, or just being on a line, I didn’t enjoy myself. I couldn’t roam the aisles to look for new books because I was always trying to figure out how much time I would need to get on a line or if I needed a ticket. It was confusing and chaotic most times but mostly, it was just frustrating. I always call BookCon my “happy place” or “my Christmas” and I didn’t get those feels this year. I really hope that something is done and that the publisher’s take the time to fix what went wrong but as for me and my friends, we are not enthused about going next year and not sure if we want to buy tickets either. Epic fail, BookCon. 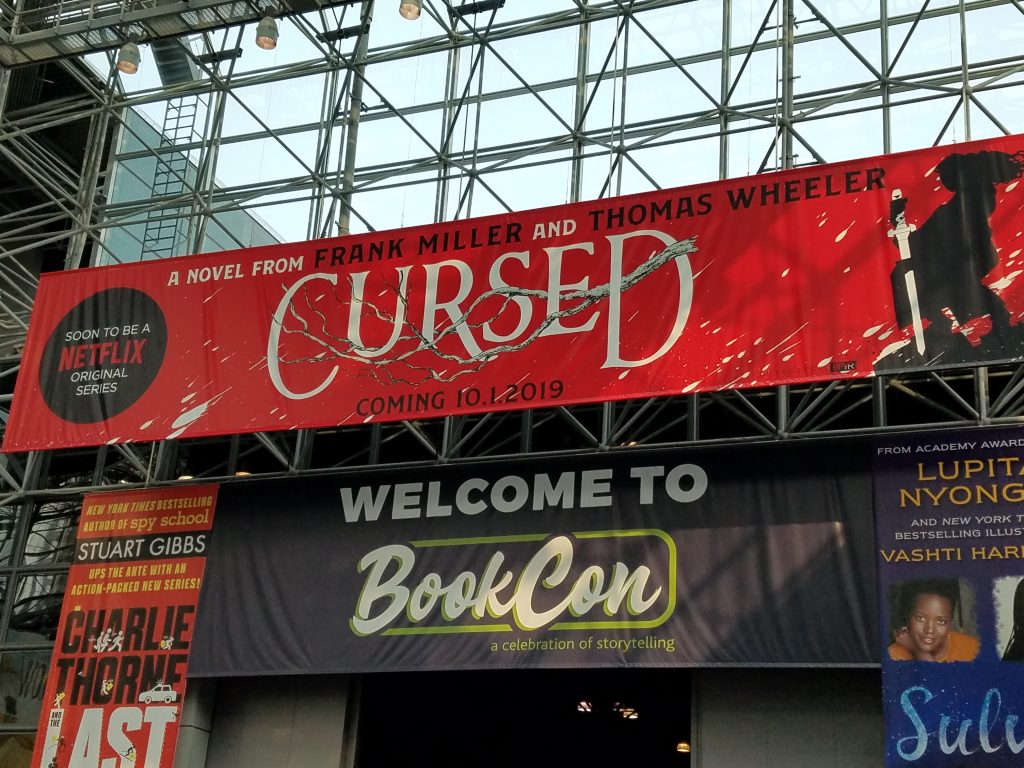