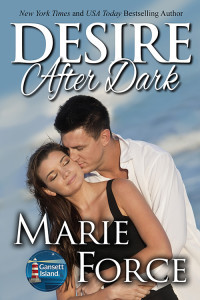 Tobias “Slim” Jackson has the perfect life as a pilot on Gansett Island in the summer and in Florida in the winter. He’s happiest when he’s in the air, or at least that was the case before last summer when he met Erin Barton, Gansett Island’s newest lighthouse keeper. Now he can’t seem to find his usual enthusiasm for flying, winter in the sunny South or anything that doesn’t include her.

Erin has been stuck on pause since she lost her twin brother. She’ll tell you herself that her life has been a hot mess since Toby died. After dropping out of law school, she’s flitted from one pointless job to another, existing rather than truly living. Then she comes to Gansett Island to take over as the new lighthouse keeper and meets Slim, who happens to share her beloved brother’s first name. That small coincidence is enough to convince Erin that she needs to spend more time with the dashing pilot—except for the fact that he’s spending the winter more than a thousand miles from her.

Now Slim’s come home to Gansett for the holidays and to hopefully pick up where he left off with Erin. He’s got twelve days before he’s due back in Florida to finish out the remainder of his winter obligations. A lot can happen in twelve days, but will it be enough to convince Erin that it’s time to start truly living again?

Desire After Dark is book 15 in the Gansett Island series and while it states that it can be read as a stand alone, I didn’t feel like it could. The book has many chapters told by other characters from previous books so while a good portion of the book is about Erin and “Slim” (real name Tobias), you get a healthy dose of the other characters and their lives as well, even being told by them. This book felt like it was very much a tribute to the fans and not really a good book to start the series in.

I’m told that Erin and Slim met in a previous book and have been chatting for a while now so when I started the book, I felt like there was a connection already there that I wasn’t a part of. Almost like a guest peering into a house before I’m allowed in. I was caught up quickly nonetheless, and I was able to gain attachment to both characters, but then I was suddenly hit by a chapter that had to do with other characters I don’t know and it interrupted the flow for me. The writing is solid and the plot was intriguing, the connection was there but not a lot of the heat that I’m used too. It’s a very sweet kind of romance. I think, if I’d read the other books, this would be a five star book because I would be happy to get glimpses into the lives of characters that I’d fallen in love with before. For me, I couldn’t get into that rhythm of because I really didn’t know what they had gone through, I’m just told that something happened that got them to this point. It was good though, and I think I would like to check out the series, but definitely from the beginning. Don’t get me wrong, I liked Erin and Slim’s story, even if there isn’t as much drama or conflict as I thought there would be, but their story really half of the book.