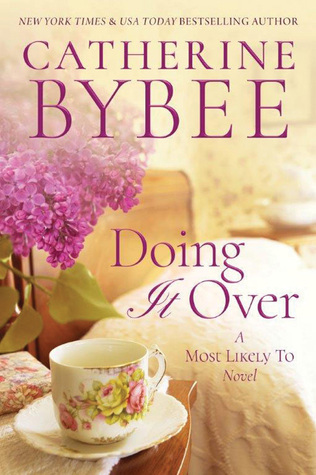 Voted Most Likely to Succeed, Melanie Bartlett ended up anything but. The down-on-her-luck single mom wants a complete do-over—is that too much to ask? With her family long gone from River Bend, strong, independent Mel is as surprised as anyone to end up in the quaint small town she once called home. But with her friends, Jo and Zoe, by her side, and a comfortable room at Miss Gina’s quirky bed-and-breakfast, she just might have turned the corner on a new life.

Wyatt Gibson never liked the big city. River Bend suits the ruggedly handsome builder just fine. Wyatt knows he’s home, even if that means being charmed by the appearance of Melanie and her spunky, adorable daughter. Is Wyatt’s calm devotion—even amid a coming storm—enough to convince Mel she may have found a home to call her own, a family that never leaves, and a true love to last a lifetime?

*Received an ARC from the author in exchange for an honest review.*

Doing It Over is a contemporary romance that took me by surprise. I loved the premise from the beginning but I honestly thought that this would be just another going back home type of romance and finding love with the boy next door. I got so much more that I am already dying to read the next book.

Jo, Zoe and Melanie have been best friends since they were young and with their High School graduation looming and already having been labeled by the town as to what they will each be when they grow up, the girls are going their separate ways. off to college out of state, Melanie was voted most likely to succeed, and is pursuing her dream even though it means leaving behind the two girls who are more like sisters. They make a pact that they will reunite for their High School reunion in 10 years.

10 years have gone by and the future is never carved in stone. Melanie now has a seven year old little girl named Hope and never finished college. Hope’s father, never wanting a family, left them once she was born and Melanie is feeling lost. Going back to her old hometown just might be the thing to put life back into perspective. Reuniting with her friends, she ends up deciding that life in (California) is no longer for her and wants to move back home.

On her journey to her new/old life, she meets the very sexy Wyatt and forms a strong connection with him. Hope also bonds with him and starts calling him “uncle Wyatt” (she’s so freaking cute) and kissing his booboos away. I swear, total heart melt moment when I read that.

“I think the stingy stuff helps clean cuts and stuff.”
Hope pushed out her lower lip. “But it hurts.”
“Yeah. It sure does.”
There was an argument stuck between Hope’s brain and her mouth, but she held it in and pressed her lips to Wyatt’s forehead.
“Kissing it better.”
The tiny punch in his heart was unexpcted.

But life has a way of dredging up the past and Melanie suddenly finds herself in a battle to protect her daughter from a father she’s never known. I was completely floored by what happens in the second half of the book. Honestly, didn’t see it coming and was so engaged in the book, I fell asleep with my kindle in my hands because I didn’t want to stop reading. I also killed the battery on the thing because every time it would dim, I kept tapping it so it wouldn’t but I was fighting sleep and losing badly.

I absolutely love the secondary characters, too. Jo and Zoe will have their own books but other characters like Miss Gina (what a hoot) and William, Wyatt’s father, were so wonderful that I kind of fell in love with them too. I also loved the small town feel. I think some authors try hard to portray the small town life but Catherine nailed. The vibes, the camaraderie, the nosiness. It was all there and I had this feeling that I wanted to be there and didn’t want to leave. Ack!! This was one of those reviews that I got stuck on “It’s so awesome!” and I wanted to sprinkle it through out just because it’s the best way to describe it. I can not wait for the next book to hit my kindle.

Tags: Catherine Bybee, Doing It Over, Most Likely To Series