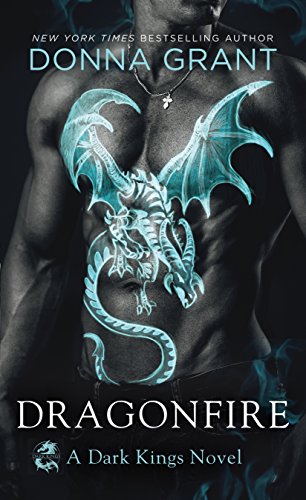 It was a soul-deep longing, one that got into his bones and settled there, sending whispers of desire through him. The need, the hunger, grew tenfold with every breath. . . .

As a Dragon King, Roman is sworn to protect all mortals—even though they no longer believe in dragons. But deep in the Carpathian Mountains, he discovers a beautiful and mysterious gypsy who possesses the power to see into his very soul. To reignite the fire in his heart. And to help him find the long-lost sword that could save the dragons forever…

Sabina remembers the stories her grandmother told her. Legends of dragons and kings, fire and ice. And she’s never forgotten the dark prophecy that filled her ancestors with fear—a fate they tried to prevent by stealing a Dragon King’s sword. Sabina knows that helping Roman is dangerous. He is a dragon betrayed, and more powerful than any man. He could destroy her in a single fiery embrace. But how can she resist the longing in his eyes—or the feelings in her heart—when their destinies are bound by desire?

Dragonfire is the fourteenth book in the Dark Kings series. These books are best read in order and not as stand-alone books as the series arcs and characters from previous books make appearances. I’m not going to lie. I haven’t read all of the books in the series so I do feel I am missing some things when I read this one. I am a huge fan of dragon shifters so this is one of those series that I want to go back to the beginning and read those I missed, in order, because this series is just so good. Honestly, I was hooked from the first chapter but did find myself faltering a little in this one.

Sabina grows up traveling with her family from town to town, the life of the Romani tribe, ever a nomad. But their purpose is much more than that. An ancestor possessing the power of sight had a vision of the Dragon King slaughtering their village and the only way to stop it was to steal his sword and keep it hidden. Sabina also possesses the power of sight while her brother possesses the ability to communicate from animals. I seriously loved these characters so much that anytime chapters would switch to other characters, I wanted it to go back to them.

The story follows Roman and V trying to find V’s sword, when they come across Sabina and her brother, who may hold the answers to their quest. The romance between Roman and Sabina seems sort of tame compared to other previous books as the story is more about them finding the sword and the romance is sort of in the background. We get a lot of snippets of other characters like Rhi whose story is sort of up in the air. I did want more focus on Sabina and Roman though because the romance did feel light but I’m still enjoying the series and can’t wait to read more.