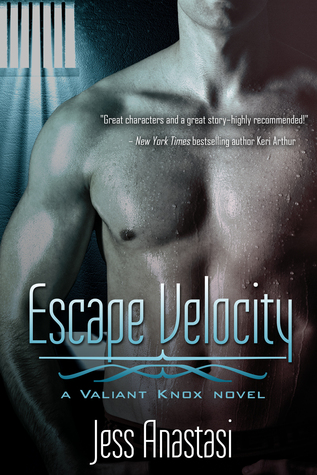 Rebuilding his life. And rediscovering love... Ilari, Brannon System, 2436At first, Dr. Sacha Dalton is simply curious about the prisoner of war admitted to her med-lab...until she sees who it is. For Commander Kai Yang—the commander of the battleship Valiant Knox—has long been thought dead. Killed in action. But after almost a year and half, he's returned home. Returned to her.Kai is recovering from his ordeal and under the watchful care of Sacha, his childhood friend and the widow of his best friend. Only now, their friendship has grown and deepened into something far deeper, and far more complicated. Yet as Kai's body recovers, his psyche remains broken. How could he ever be the man he was, and the man Sacha deserves? But an intergalactic war has a way of forcing a man to be the hero he was always meant to be...

Escape Velocity was a terrific Sci-Fi read. Set in the year 2436, there’s action, battleships, romance, and great writing. I’m fairly picky when it comes to sci-fi books and I didn’t want to put it down.

For the last year and a half, Commander Kai Yang, believed to be dead, has been a prisoner of war. Forced to survive in unspeakable conditions, he finally escapes CSS, suffering from physical and emotional damage. The only thing helping survive were thoughts of his oldest friend Sacha, who also happened to be married to his best friend.

“There’d been days in that CSS cell when the only thing he’d wanted was to see her again. Her memory had stayed with him a lot longer than anything else of his former life.”

Dr. Sacha Dalton can’t believe her eyes when she sees her Kai alive. For the last year and half she’s been in mourning. First for her childhood friend who she’s always harbored feelings for and then for her husband who died a few months after his disappearance. Now back in her life, she’ll do anything to help him. But her feelings are muddled. While she should have still been in mourning for her husband, her real pain stemmed from the lost of Kai. Sacha is struggling to separate her feeling for him and treat him as his doctor and push her feeling for him aside. Added to the fact that the sexual tension is high between these two and neither one knows what to do with these feelings.

But with Sacha believing he’s suffering from PTSD and Kai frustrated with thoughts of how his life has changed, trying to figure out where he fits after having been gone so long, these two butt heads. Tensions are high between the two and at times, I wanted to sleep them both upside the head, Sacha especially. There were  few moments that I thought this might end up being a cliff hanger and we’d get another book to resolve their issues but I’m glad it had an HEA. I’m also hoping this expands to a series, as I found the technology, and the action a lot of fun to read. I’ll definitely be looking for more books from this author.