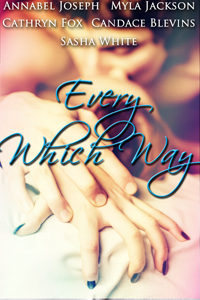 Love beckons and desires tempts in this sizzling collection of Five brand new stories of erotic romance Every Which Way from some of the hottest storytellers aroundUNABASHED by Sasha WhiteShe's finally found a man who sees her for the woman she is, and she's not holding back.Mechanic Veronica "Ronnie" Mack joined the Overwatch club because she'd given up on finding love, and decided to settle for sexual satisfaction. Then Ian, her childhood crush, walked back into her life as one of the club's Trainers, and proved that their connection was as strong as ever.LOANED from Annabel JosephIt's all kinky fun and games, until someone loses their heart.Bettina's Master gets off on loaning her to strangers. Afterward, she's supposed to report back to him with all the raunchy details. It's all kinky fun and games, until one of those strangers decides he doesn't want to give her back...BOOTS & WINGS from Myla JacksonWhen a woman comes between brothers, passions take wingsPilots, partners and brothers, Jake and Tucker Maddox, are both in love with Molly O'Brien and she's in love with them. Only she won't choose between the two of them. Drawing the line in the sand, the brothers tell her they aren't willing to share.PIN ME UP PROPER from Cathryn FoxShackles, blindfolds and ropes, oh my...she's not in Kansas anymore.Bored with the men in her life, actress Janie Monroe is looking for something different. On a whim, she decides to seduce her cameraman, a guy who comes off as a nerdy video gamer. After enticing him at a pin-up photo shoot, she learns that he does indeed like to play, but instead of a game console and controller, his toys are shackles, blindfolds and ropes. Janie soon finds herself immersed in a world of dark passions where her boundaries are challenged and pleasure beyond her wildest imagination is the prize.ACCEPTABLE RISK from Candace BelvinsBethany has joked for years that if she ever settles down, it'll be with a harem of men, only it isn't a joke anymore. Mac is a new werewolf, and still must be watched at every moment to be sure he stays in control. His kink has always been ménage, so when he overhears the beautiful redhead at the bar wanting to take on not only him, but also the werewolf and wereleopard chaperoning his night out... he has to convince them to let him take her home. He might not be trustworthy with a human woman alone, yet, but with two powerful shapeshifters in bed with them, what could go wrong?

UNABASHED ~ When an old love walks back into his life, a Dom now has the Submissive he’s always dreamed of but both of them have a lot to learn about this new relationship.

BOOTS & WINGS ~ What happens when you can’t decide between two sexy brothers? Take them both, of course. Unable to decide who to choose, Molly tries to walk away but the boys have other plans for her. A sexy ménage story

PIN ME UP PROPER ~ One of my favorites in the set. Actress Janie is bored with the men in her life but bit off more than she can chew when she decides Kaden is the one to change things up. Will definitely say, Tate needs his own story. Yum.

ACCEPTABLE RISK ~ Extra hot shifter ménage was the perfect end to the box set. Another favorite and sure to entice, this was my first Candice Blevins book but most certainly not my last. Three is always better than two.

Tags: Every Which Way