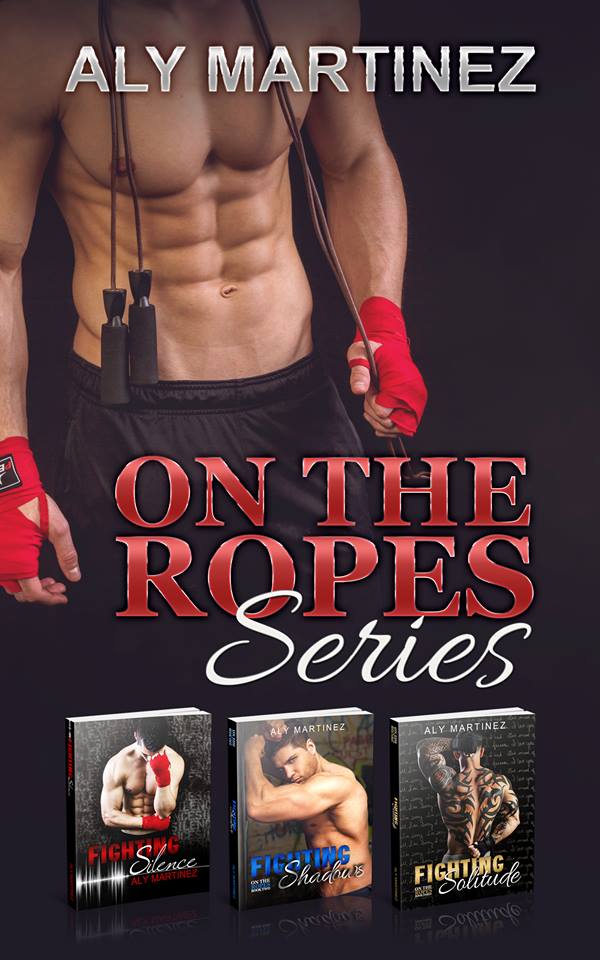 Now you can get the complete On The Ropes Series for only $3.99 for a very limited time! Price will go up to $6.99 in a few days! Grab this #fighter#romanceseries today!

For the Page brothers, fighting was a way of life. Both inside and outside of the ring.

Follow them through hardship, disability, and overwhelming adversity as they fight for the women they love.

Meeting the love of my life at age thirteen was never part of my plan. However, neither was gradually going deaf at the age of twenty-one.

They both happened anyway.

Now, I'm on the ropes during the toughest battles of my life.

Fighting for my career.

I was a jaded asshole who fell for a girl with a knack for running away. I couldn’t even walk but I would have spent a lifetime chasing her.

Now, I’m on the ropes during the toughest battles of my life.

Fighting the shadows of our past.

Fighting to reclaim my future.

Liv was everything to me, but she was never truly mine.

That was going to change.

I lost my first love, but I refused to lose my soulmate.

Now, I’m on the ropes during the toughest battles of my life.

Fighting to be the man she deserves.

Fighting the solitude of our pasts.

He didn’t budge, but my bare feet slipped, sending me toward the ground. Impossibly fast, Till’s hand snaked out and caught my arm. But I didn’t let his chivalrous gesture douse my fire. I had six months’ worth of words to say to the man I was irrevocably in love with.

“You took what you wanted. Then you left me.”

I had been perilously close to the edge of insanity, and with one single word, he’d pushed me over.

I lost it completely.

Pounding my fists against his chest, I screamed at the top of my lungs, “It’s Eliza! My name is fucking Eliza! Not Doodle!” I spun to march away, but Till’s arms folded around me, lifting me off my feet to restrain me.

I was miniscule compared to him. There was no use in fighting, but I still kicked my legs, irrationally desperate to get away from him—but only because I knew I couldn’t keep him for forever.

“Stop it!” he growled into my ear. “I know your goddamned name—probably better than I know my own.”

While I was wrapped in Till’s strong arms, six months’ worth of tears fell from my eyes. He carried me to my apartment and guided me back through the window before following me inside. Then he stripped out of his blood-soaked shirt before dragging the blankets down and climbing into the bed behind me. I cried for a while in his arms, even turning to face him, only to cry against his chest. I had missed him so much.

I knew I’d loved Till years ago, but this was more. I needed him in order to function on a very basic level. Together, the world didn’t feel so big and overwhelming. He was my escape—the dream personified.

Till Page was comfortable.

His hands trailed up and down my back as he lulled me until the words fought their way out.

“I couldn’t stop going back,” I announced in a broken whisper. “I didn’t know where you had gone. And for the first time since I was thirteen, I was alone inside my own head. God. It was a scary place.” I tried to joke, but the tears streaming down my face told the truth.

“Why?” I whined, but I curled in closer against his chest, needing to feel him more than anything else.

God! It was such a fucking lie. He knew as well as I did. He just didn’t want to tell me.

“Where did you go?” I pressed further.

There was no way I ever could have expected his answer, but that wasn’t because it was a novel thought. No. His answer was surprising because it was the source of my anguish too.

“The real world.” He kissed my forehead.

Tags: Ali Martinez, On the Ropes