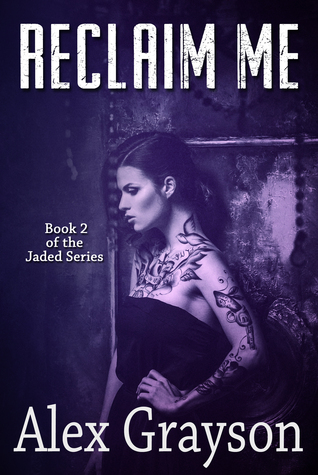 Excerpt ~ Reclaim Me (The Jaded Series, Book 2) by Alex Grayson

I step out into the hall and brace myself to face him. It’s unavoidable. He’s damn sure made it so.

I release a sigh. “What do you want now, Sheriff? I’m tired and don’t want to deal with this shit right now.”

“You can’t avoid me forever, Mia. There are things you don’t know that you should. Things I’ve tried telling you before but you haven’t allowed me to.” He moves away from the wall and takes a slow step towards me. It takes everything I have not to take a step back for every forward movement he makes.

“It doesn’t matter. It’s too late. Besides, nothing you say would make a difference. What you did, the repercussions on both our parts, is something that can’t ever be undone.”

I throw my hands up to my ears, squeeze my eyes shut, and yell, “No! I can’t, Mac! I don’t want to hear it! And stop fucking calling me that!”

All of a sudden, I feel hands at my wrists, trying to bring them down. I jump at the touch and try to jerk away.

“Goddamn it, Mia!” I hear Mac’s muffled baritone through my hands that are still over my ears. “Fuck, you are one stubborn bitch, you know that?”

I drop my hands and sling my head up at his words. How fucking dare he! He’s the one that caused this mess. Now he wants to get mad because I don’t care to hear what he has to say.

“You know what, Mac? You can kiss my ass. You get pissed because I don’t want to hear what you want me to hear. Go fuck yourself and leave me the hell alone.” My breathing is heavy because my emotions are getting the best of me. Mac always seems to bring out all my emotions.

Mac leans his head down so his face is level with mine and grits out, “Mia, it’s been ten fucking years. I think that’s long enough for you to finally give me a chance to explain.” When I go to object again, he stops me before I get a chance. “Shut it! You listen to me now.” I snap my mouth closed at his bluntness. “What I have to say may not change anything, but fuck all if you’re going to continue to live in the dark on what really happened that night.”

I glare up at him while he stares down at me with his beautiful green eyes, eyes that I sometime still see at night. They’re intense right now as they watch me. A low swirl starts in the pit of my stomach at his closeness. I can smell his woodsy scent, and it’s causing dirty thoughts to form in my head. Thoughts of him shoving me up against the wall and taking me hard.

My chest is heaving for a whole other reason now. As much as I hate him, I want him still. He notices my reaction, and his eyes flare in response. He takes a step closer towards me so our bodies are practically touching. I take a couple steps back until my body hits the wall, and he advances forward again. With him this close, I have to tip my head back to keep my eyes on his face. He cages me in with his arms on either side of my head.

“What’s going in that head of yours, Pix?” He murmurs. “Are you thinking the same things as me? Are you thinking about me picking you up and wrapping your gorgeous legs around me so you can grind that wet pussy against my cock? Or, how about me flipping you around and pulling those tight ass pants down and feasting on your pussy? Or are you just skipping all the foreplay and going straight to me sliding my dick in your tight cunt?”

I lean my head back against the wall and close my eyes, trying to block out all the images conjuring in my head from his words. I feel his breath against my neck right before I feel the scruff of his five o’clock shadow.

“You’re thinking all those things, aren’t you? You want it all. You don’t want to want it, but you want me to finally take you,” he whispers in my ear.

It’s the word ‘finally’ that brings me back to reality. It’s such a simple word, but the meaning behind it is what causes my chest to hurt with unbearable pain. He should have already had me ten years ago. We should have had each other. He was the one to decide to throw it away to someone else, and in turn, someone else took mine.