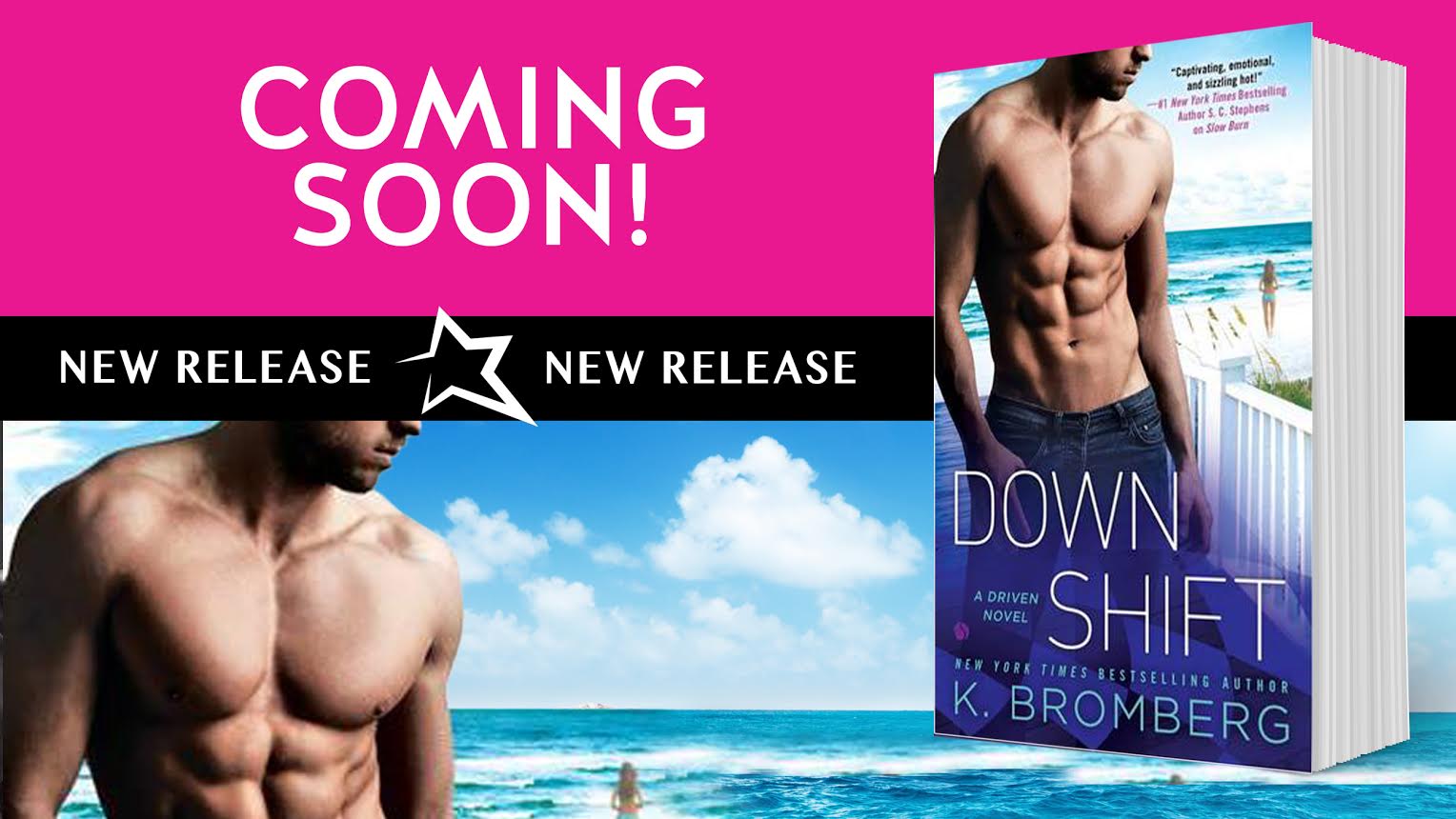 Meet Zander & Getty in DOWN SHIFT - the newest stand alone in the Driven Series by K. Bromberg!

The New York Times bestselling Driven series continues with a story about finding love where you least expect it...

Behind the wheel, racing champion Zander Donavan is at the top of his game. But after too much excess in his personal life, he’s forced to step away. He needs to accomplish something all on his own—outside of his famous father, Colton Donavan’s, shadow.

Getty Caster is running away from the abuse that clouds her past. She thinks she’s found the perfect escape—until she discovers a stranger in the beachside cottage she’d been promised. He’s undeniably sexy, but she’s there to heal. Alone.

Before long though, fighting with each other turns into fighting their attraction. And giving into desire sets off a chain reaction that has their pasts colliding. With an unexpected love on the line, can they overcome the fallout to build a future?

I force myself to look away because . . . well, because he’s a stranger. In my house. Naked. And oh my God, something is wrong with me, because I’m not running and calling 911 like I should.

When his chuckle subsides, he brings his head back down, so I can see the tears in his eyes from laughter. “That thing is my cock, and since this is my bathroom and you seem to be attempting to seduce me in my house, I don’t think you have any right to tell me what to do.” And with that, he leans a hip against the counter and folds his arms across his chest, eyes locked on mine and one eyebrow lifted. Everything else is left hanging out there in the wind.

“Your house? Seduce you?” At that point I realize I’m sputtering and shaking my head. “This is my house. You’re in my house.”

Confusion drifts across his face and his jaw falls lax. “Hold up.” He lifts his hands in the hold on a minute position, drawing my eyes back to where they don’t want to be. If this whole situation weren’t so unbelievable, it would be comical, and yet as true as that is, I don’t seem to be laughing at all. “I think there seems to be some misunderstanding.”

“No shit.” Sarcasm is my fallback and it doesn’t disappoint me now. A lot of good it does me, though, as I’m still doing the naked dance while trying to react to this surreal situation.

The look of disdain he gives me at my comment earns him no points in my book. “While I’m digging the socks with your outfit,” he says with a smirk, eyes veering down and then back up to my strategically placed hands, “you should cover up.” I catch the towel he tosses me and immediately wrap it around myself. I’m certain my mismatching knee-high socks make a statement about me, but I’m beyond caring, because I’m still alone in my house with a strange man and have no answers as to how this has happened.

With one hand clutching onto the towel at my collarbone, I use the other to motion to him. “You too.”

A lightning flash of a grin glances across his lips. “Sorry, but you just took the only towel left.”