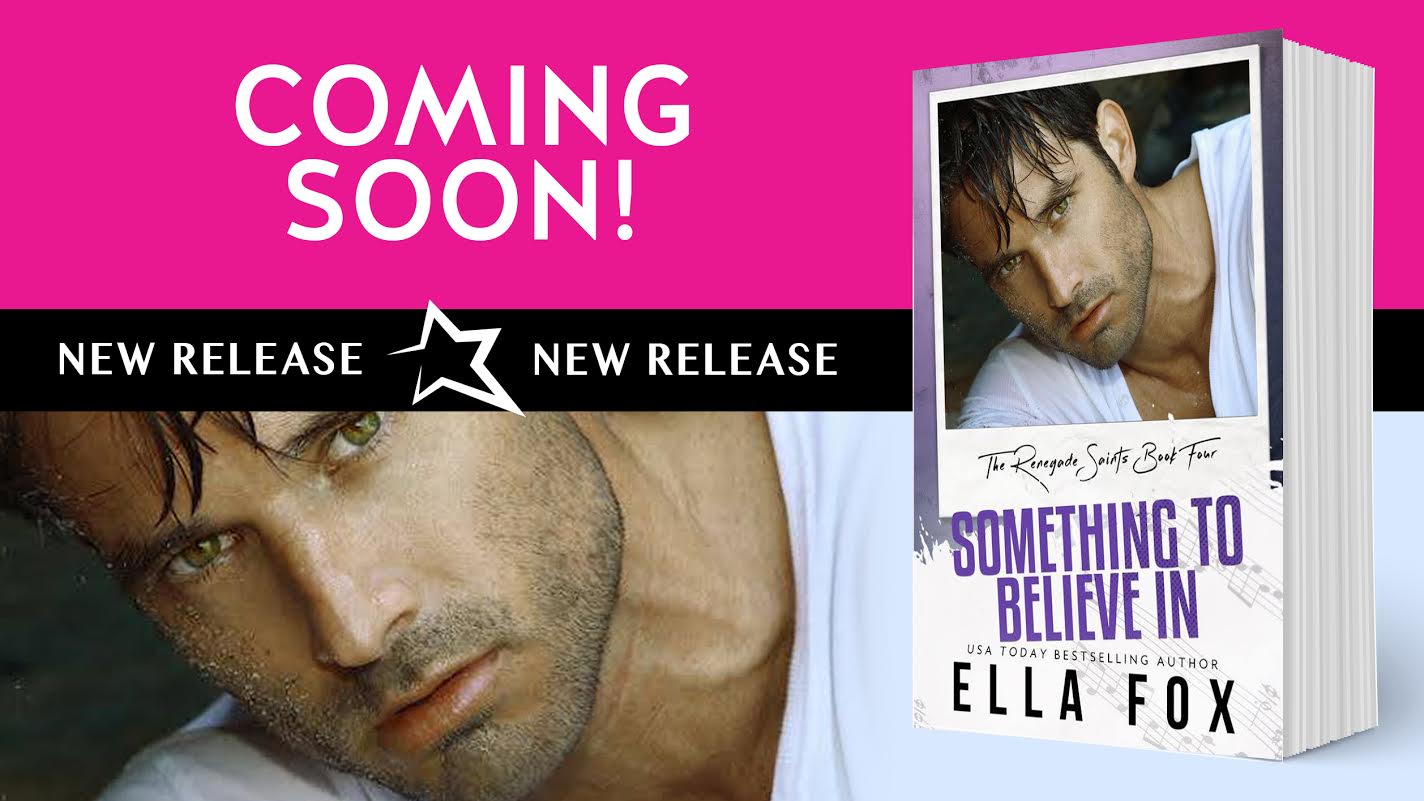 The newest Rock Star Romance by Ella Fox Releases on August 16th!
Add Series to your TBR at: http://bit.ly/2b4iRsD

A rock star with millions of adoring fans.
A country girl with a broken heart.

Rock star, Tyson Allen, is the hilarious, in-your-face bass player for one of the world's most popular bands. Behind his funny-guy exterior hides a tragic past full of unbearable horror. After turning to drugs and alcohol to numb the pain, Tyson hit rock bottom on a New York City sidewalk. For several minutes, Tyson Allen was gone--dead. And now, he's trying to rebuild a life he nearly lost. He found a way to move forward and live life—a way he was comfortable with. All was going according to plan until he met the new assistant for his band.

In an instant, everything changes.

Daisy Hammond has a slew of her own tragedies. And the last thing she needs is a crush on one of America's rock legends. But unlike Tyson, her kind and generous heart refuses to push people away. Working with the band isn't easy as Tyson doesn't want anything to do with her. Despite his standoffish and rude demeanor, Daisy can't deny the pull she has for him. Determined to stay away from the bass player with an attitude, she goes about her business without getting in his way. But one night, their desire for one another erupts. Now it's up to Daisy to pull Ty out of his shell before the tour ends and they go their separate ways. Will she find a way to break down Ty's walls before it's too late?

Rock bottom was an alley in New York City where I, a strung out junkie asshole, pissed myself and twitched like a bitch as I lost control of my body. It seemed fitting considering how I’d lost control of everything else. My path had always been leading me to a busted piece of concrete beside a filthy dumpster of rank smelling garbage.

For me, being a junkie was all about one thing—the fucking sound that defined my life. It was a return to home, but getting there was a raging bitch with sharp claws and razor-like teeth. It hurt like a motherfucker and broke what was left of my spirit piece by miserable piece, but I did it anyway. Pay to fucking play, I thought. Honestly, back then I’d have shot up battery acid if it meant I’d have five goddamn seconds of peace.

I could feel my heartbeat of course, but when I was high, I could hear it, too, thump-thump-thumping in my ears. It was a steady series of bass notes that reminded me of better times. Of home.  Of safety and laughter. Later my home became the stuff of nightmares, a prison of terror and mind-fucking cruelty that could never, ever be forgotten. That part of my life I was able to tap into without drugs, since it lived and breathed inside of me every minute of every day—until I started shooting up. Once that shit hit my veins I’d cruise to numb before floating off.  It fucking sucked, especially the aftermath, but those few seconds of nothing were like an oasis in the desert of my life.  It was killing me, but I didn’t care.  Of course, I’d been banking on my lifetime not being very long at all.

Which is why I wasn’t even a little upset as I twitched on the sidewalk and sensed death hovering over me.

I hadn’t just raced toward my own demise; I’d also been busy inviting it in.  Hell, I’d all but sent out engraved invitations and by my estimation, death had been passing me over for far too long.

As I twitched on the pavement, ready to have it all be over, I felt something around me shift.

I knew she was there because I’d smelled her Loves Baby Soft perfume.  When she spoke, she was right next to me, close enough for me to feel her hand when it covered mine. I also felt her head as it set down on my chest, just over my heart.

“I love this sound,” she murmured.

For a moment, her sweet voice warmed the coldest place inside of me.  My eyes were at half-mast as I tried and failed to let her know I remembered how much she loved the sound of a beating heart. It wasn’t something I could ever forget.

“Dad always said the rhythm of the heart was musical.”

My heart, which I imagined was like a sandbox made of broken and worn down glass, cracked in my chest. I wanted to respond, but words were too difficult to form. My tongue wouldn’t cooperate.

“I know what you’re doing, and you have to stop,” she whispered.  “This isn’t okay. It’s almost too late.”

She was right.  The sound was slow and unsteady. I heard the concern in her voice, but couldn’t find it in me to care about the state I was in.

She expelled a heavy sigh.

“What’s coming is going to hurt,” she warned.

I dealt in hurt the way some people dealt cards, so threatening pain was laughable. I was on a first name basis with it, which meant it didn’t scare me in the least.  It had been years since I’d felt anything consistently other than agony. I tried to fake it sometimes, tried to pretend I was experiencing happiness—but when I was alone, all of the subterfuge disappeared.  I wasn’t happy and I didn’t see how I ever could be.

Not with what I’d seen.

Not after what I’d lost.

The rhythm of the beat was gone.  In its absence was a series of discordant thumps without rhyme or reason.

Suddenly, light surrounded me. I was relieved because it surely meant my hell was almost over. I wasn’t even a little bit sad.  The light brought no warm feeling with it, and I thought I heard terse sounding voices, but I didn’t let it upset me.  Everyone knew when you saw the light, you were meant to go toward it.

Finally, I thought, I was going home.

I wanted to answer, but I couldn’t open my mouth. Why wasn’t it ever my time? Why couldn’t I make the choice?

“Nothing can change what happened,” she said firmly. “Stop trying to check out of life, Tyson.”

My mind was screaming in agony and I wanted to tell her she didn’t know what it was like to have gone through what I did.  She didn’t know how it felt to be so horribly alone.

“I’m always with you,” she assured me. “We all are. Stop chasing death and start living—if not for yourself, then for me.  For us.”

I think I whimpered then, like a small boy hiding from monsters beneath his bed.

“Help is here,” she announced.

I felt her lips against my cheek, and it made me want to cry. I didn’t want help—I needed it all to be over. It felt like the end was close—I couldn’t hear my heartbeat anymore.

“You’ll never see me again if you don’t fight,” she told me. “Stop trying to kill yourself and realize that life is a gift.”

If I’d been able to, I would have cursed. It sure as hell didn’t feel like a gift to me.

“Because you’re letting the pain win,” she said sadly. “This is your last chance.  Take it.”

I wondered how she knew that, but then I lost the ability to form coherent thoughts since my body felt like it was on fire.  Pain slashed through my veins like razorblades being chased by molten lava, and no area of my body was immune.  Even my eyelids felt dry and scorched.  I wanted to scream my lungs out, to beg for it to end, but I couldn’t move. The Loves Baby Soft smell of her faded away, replaced by an acrid stench that burned my nostrils.

I thought I was in hell.  Regardless of whether I could go home or not, I didn’t think I had the wherewithal to withstand the amount of pain ricocheting through my body like a thousand bullets.  My ribs and chest hurt so badly, I wished I could just stop feeling.  I’d foolishly believed my utter lack of care or concern about my life meant death would be easy.

Death, I found, was brutal business.

The torture seemed to last an eternity and through it all, I was unable to communicate.  My eyes stayed closed, and my mouth wouldn’t form words.  I couldn’t even lift a hand.  If I’d been able to, I would’ve shoved whoever was touching me far, far away.  Being fried from the inside out was hell on earth and I wondered why the fuck it wasn’t stopping.

How the hell could she have called what was happening to me help?

Right then the only thing I knew for sure was that if being helped hurt that much, I preferred to go without the aid.

Tags: Ella Fox, excerpt, Something to Believe In