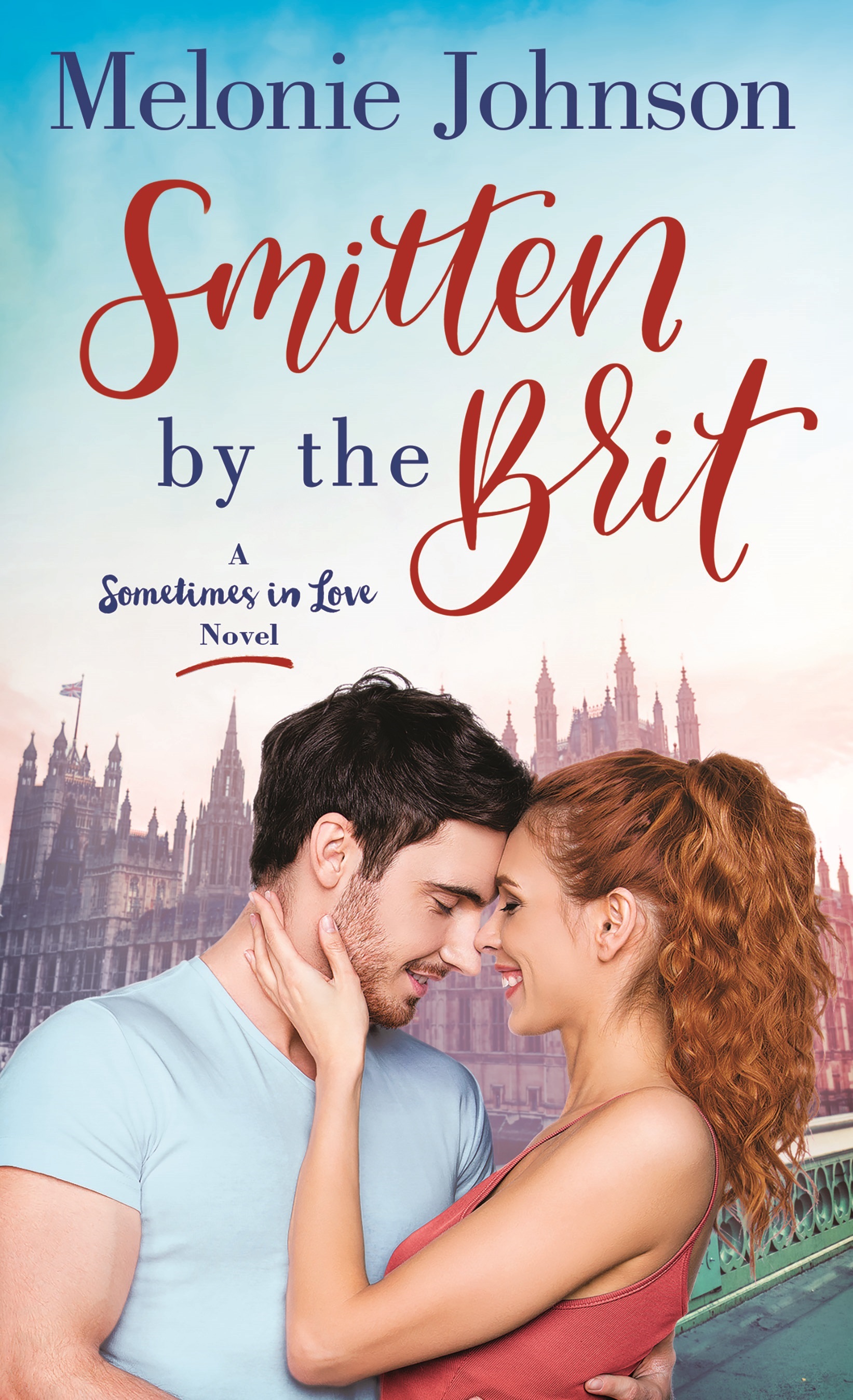 SMITTEN BY THE BRIT releases May 28th! Check out an exclusive excerpt below!

English professor Bonnie Blythe expects her life to play out like her favorite novels, especially now that her long-term boyfriend has finally proposed. So when a shocking discovery leads Bonnie to end her engagement, she decides to close the book on love. But the plot thickens when a brand-new character enters the scene—and quickens Bonnie’s heart.

With his brilliant blue eyes, sexy accent, and irresistible charm, Theo Wharton is like a romantic hero straight out of a Jane Austen novel. When fate places Bonnie in England for a summer—conveniently close to Theo—she realizes a hot friends-with-benefits fling is exactly what she needs to start a fresh chapter. Just as Bonnie begins to believe she’s falling in love, an eye-opening revelation into Theo’s life makes Bonnie feel like she’s wandered into one of her favorite books. Will Bonnie have the courage to risk her heart and turn the page with the dashing Brit to find her true happy ending after all?

Tucking herself into a stall, Bonnie took several deep breaths. The space was too tiny to allow for pacing, so she turned in a tight circle, careful not to let her dress fall in the toilet. Why? Why did this have to happen now?
At any other time in her life, she’d have jumped at the opportunity. Teaching Shakespeare, even only for a few weeks, at a school like Cambridge would be a dream come true. But this summer was supposed to be the summer another dream finally came true. She was supposed to be planning her wedding, not running off to England for two months.
“No offense, but how much longer you gonna be in there?” An irate South Side accent demanded from the other side of the stall.
Is forever an option? But when South Side began pounding on the door, Bonnie knew she needed to get out of there. She flushed the toilet for appearance’s sake and opened the stall, coming face-to-face with an irritated- looking witch. Bonnie slipped past the girl, offering her an apologetic smile. Leaning against the wall, waiting in line, were two more witches, looking equally annoyed. “The Weird Sisters, huh?”

The girls glared at her. Right.
Before she found herself in double toil and trouble, Bon- nie washed her hands and made a hasty exit. She hurried through the restroom door, careening straight into a solid wall of suit-covered muscle. “Oof!” she exhaled, stumbling as her floral crown flopped down over her eyes and icy liquid splashed across her chest.
“Sorry!” a smooth male voice apologized, his British accent slicing the r’s into a crisp d sound.
Bonnie froze. She recognized that voice, knew that polished British accent. Heart beating faster, Bonnie lifted her chin, trying to peek through the tangle of flowers currently blinding her. Warm fingers brushed her forehead, and a moment later she could see . . . straight into a pair of familiar blue eyes fringed with sinfully long, sooty lashes.
“Theo!” she sputtered. “What are you doing here?”

“At the moment?” He set his now-empty glass on a
passing server’s tray and reached up to adjust her crown, gently freeing a flower ensnarled in her mass of curls. “Assisting you.” Theo grinned, twin dimples appearing in his cheeks.
A fluttering sensation tickled the backs of her knees, and she swayed.
“Are you quite all right?” he asked, holding her by the shoulders and steadying her.
“Me? I’m fine, totally fine,” she babbled, wishing she’d gone home when she’d had the chance. Why hadn’t Cassie mentioned Theo was coming tonight? She had to know he would be here; Logan was his best friend.
In fact, it was through Logan that Bonnie had met Theo in the first place while in London last summer, on a sup- per cruise along the Thames. It was a meeting she was unlikely to forget, even though she’d been trying very hard to do just that ever since. Tall, dark, and handsome, not to mention that accent, Theo embodied every Austen hero Bonnie had ever crushed on. And she’d crushed on several.
Meanwhile, her friend Ana, who’d also been on the sup- per cruise that night on the Thames, had christened Theo “Prince Eric.” It was an apt moniker. With his cap of thick black hair, soulful blue eyes, and easy smile, the Brit did look like the cartoon prince come to life.
“Who are you supposed to be?” Bonnie took a closer look at the get-up Theo was presently sporting and smiled. Maybe he wasn’t a prince, but he looked like someone noble . . . “A duke?”
He breathed in sharply. “Pardon?”
“Your costume.” She gestured at the formal sash and medallion decorating his chest. “I’m guessing Orsino, maybe? From Twelfth Night?”
“Oh, right. Orsino. Exactly.” He exhaled, shoulders visibly relaxing beneath the tailored cut of his coat. “If music be the food of love . . .”
“Play on.” She finished the line, beaming up at him. Their eyes met, and just as she had last summer, Bonnie felt an irresistible pull. Well, not literally irresistible—she had managed to resist him, after all. Faithful to her fiancé, Bonnie might not be able to control how her body reacted to the dashing Brit, but she could control what she did about it. Which was nothing.
She pulled back, breaking their gaze and pushing an- other wayward curl out of her face. “Can you guess who I am?”
“Hmm,” he murmured, “I’d wager on Ophelia.” He looked her over slowly from floral-crowned head to slippered feet. “Going for the Millais version, I see.”
“Very good.” He knew Millais? Impressive. Cute and smart. Oh, her willpower was going to get a workout to­night.
“You like Millais’s work?” He pulled a handkerchief from his pocket and offered it to her.
“No, I love his work. And Waterhouse too.” She sighed and accepted the handkerchief, dabbing at the alcohol soaking the bodice of her dress. A memory flashed through her. “I once tried to recreate his painting of The Lady of Shallot.”
“You paint?”
“No.” She laughed. “Not well, anyway. I acted it out. I’d read about a girl doing that in a book and wanted to give it a try.” It wasn’t the first or the last time Bonnie tried to copy a scene from Anne of Green Gables. She believed Anne Shirley to be her literary doppelgänger and cast her best friend, Cassie, as Anne’s bosom buddy, Diana Barry. Luckily, unlike the boat Anne borrows from Diana in the book, the inflatable raft Bonnie borrowed from Cassie hadn’t sprung a leak.
Theo shook his head. “What is it with you and watery tarts?”
“Are you quoting Monty Python at me?”
He pulled a serious face. “I’m simply concerned about your apparent obsession with strange women lying in ponds.”
She tittered. Oh God, she actually tittered. Bonnie winced. She dropped her gaze and dabbed harder at the dark stain spreading across the front of her dress. “The painting is so beautiful, so ethereal . . . even a copy of it in a book brings the magic of Tennyson’s poem to life. I wanted to live that magic.” She was rambling but couldn’t seem to stop. Her brain went on sabbatical whenever the Brit was near. That’s it, Ophelia, time to get thee to a nunnery.

“They are beautiful,” he murmured.
She glanced up to find him staring at her chest. “Excuse me?” Bonnie stopped dabbing. Was he talking about her breasts?
“Did you see them at the Tate?” His blue eyes met hers, coal black brows arched with polite curiosity. “When you were in London last summer?”
The paintings. Right. She shook her head. “We did the Victoria and Albert Museum instead.”
“Shame.” He sounded truly disappointed. “There’s an- other Millais at the Tate, of a different Tennyson poem. Based on one of Shakespeare’s comedies. Do you know the one I mean?”
“Please,” she scoffed. “Is this a quiz? Mariana, from Measure for Measure.” She handed him back his handkerchief, now a little worse for wear. “Though I could never think of that play as a comedy.”
“The lady knows Shakespeare, poets, painters . . . and even Monty Python.” He blew a soft whistle. “My, you are quite cultured for an American.”
A hum of awareness threaded through her, and she tamped it down. “Are you complimenting me or insulting my country?”
He didn’t reply, but the corners of his mouth curled with amusement, one dimple coming out to play.
The backs of her knees immediately began to prickle again. Damn it. Why couldn’t the Brit have stayed on his side of the pond?