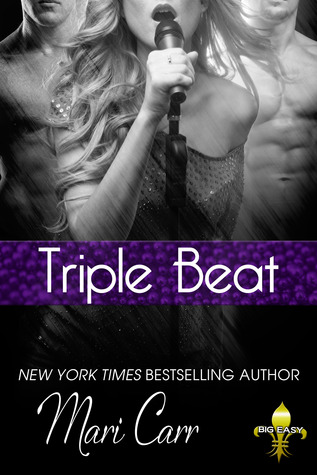 He sighed. “Ignore it, Dani. Natural male response when he’s in bed with a half-naked woman.”

“Sort of hard to ignore when it’s poking me in the ass,” she added.

She rolled her eyes. “Gross.” Even as she said the word, she considered what it would feel like to have sex with Bryson. Or Aiden. It wasn’t the first time that racy thought had crossed her mind. She’d always dismissed it because the band—and their friendship—meant too much to her to risk for sex. No matter how amazing she suspected that sex would be.

She wasn’t sure why she was so certain the guys were great in bed. Maybe it was simply a female reaction to the way they made her feel when they sang a love song, or watching their fingers fly with incredible skill over their instruments. She’d spent a little too much time lately considering those fingers strumming her instrument.

“I really need to find a guy and get laid,” she muttered.

Aiden twisted to his side to face her. The moon provided enough light to allow her to see his expression clearly. “Been telling you that for nearly two years. It’s not healthy to go so long without.”

“Not sure health has anything to do with it.”

She was surprised when Aiden reached out and pushed a strand of hair away from her face. “Feeling better?” He was obviously still worried about her nightmare.

She nodded. “I’m sorry I’ve been such a pain in the ass this past week. I promise…just a few days more and I’ll be back to normal.”

Aiden gave her a friendly smile. “Don’t set your goals so high, Dani. You were never normal.”

“I chalk that up to too many years spent with Bryson. That shit tends to rub off.”

“You wish you were as cool as me,” Bryson said in his own defense.

Dani glanced over her shoulder. Bryson looked very comfortable, his head resting on the pillow, the longish mass of jet-black hair hiding his dark-brown eyes, his arm wrapped tightly around her waist and his very erect penis pressed firmly to her backside. He was incredibly beautiful, but she was certain he’d scoff if she used that word to describe him.

Then she looked back at Aiden. He wore his light-brown hair shorter and hid his pretty blue eyes behind wire-framed glasses whenever he was working at the computer or reading a new piece of music. Bryson teased him, claiming he just wore them to look smarter, but Aiden never took offense. He just joked back that not even glasses could give Bryson an air of intelligence.

“I’m glad you guys are here.” She’d been so wrapped up in her anxieties lately that she’d pushed away the very people she needed the most.

“All you had to do was ask.” Aiden placed a soft kiss to her forehead. Then another one.

They weren’t overly affectionate friends. Most of their touching typically came in the form of high-fives or roughhousing. Kisses and cuddles weren’t part of it.

Dani reached out and cupped Aiden’s beloved face. “Thank you.”

She wasn’t sure who moved first. Maybe they both moved together. But one second she and Aiden were simply smiling at each other, and then they were much closer, their lips touching in a quick, only somewhat chaste kiss.

They parted for a moment before they came in for another. This one lingered a second longer than the first.

Bryson’s arm tightened around her waist, but he didn’t speak, didn’t call them out or ask them what the hell they were doing.

Aiden pulled farther away after the second kiss, his brows furrowed, confusion in his eyes. She suspected that expression was mirrored in her face.

And then it cleared. He relaxed, and so did she.

When they moved in for the third kiss, it was as if they were prepared, ready for it.

He stroked her lower lip with his tongue and she opened her mouth on a gasp. Aiden took advantage. This kiss lasted much longer, the two of them taking their time to explore each other’s mouths. Aiden’s fingers tangled in her hair and he used that grip to gently twist her head this way or that to help him deepen the kiss.

Bryson was silent through it all, but Dani knew he wasn’t oblivious to what was happening. He also didn’t seem content to merely observe. His hand slipped beneath the hem of her t-shirt, stroking the bare skin of her stomach, and then moving up to her breast.

Dani’s breathing became erratic as she tried to keep up with the sensations drowning her. Bryson grasped her breast firmly, his large hand plumping the flesh, his fingers pinching her nipple.

Aiden either didn’t notice or he didn’t care about Bryson’s touches. He tightened his grip on her hair and kissed her harder.

Dani was helpless to resist any of it. She pushed her ass against Bryson’s cock, seeking more stimulation. The movement was a blatant invitation. One that Bryson didn’t hesitate to accept.

His hand left her breast, traveling to her hip. He gripped it, tugging her back as he pushed forward, letting her feel exactly how much he wanted her.

It was too much. Dani broke off the kiss, desperately attempting to suck in some much-needed air. Aiden didn’t attempt to resume it, but he didn’t let her slow him down either. He ran his fingers along her neck, his gaze following the touch. Then he grasped the comforter covering them and pulled it down, not stopping until the bulk of it rested around her knees.

Regardless of the number of times they’d seen her dressed exactly like this, this was the first time she’d felt exposed, almost naked in front of them. Aiden’s gaze traveled over her, studying things he’d never appeared to notice before. Or was it things he’d tried not to see? Had they had lustful thoughts about her as well?

Aiden reached out and ran his fingers over her covered breast, the same one Bryson had just released.

Neither Dani nor Bryson had stopped moving, the humping motion imitating exactly what Dani wanted to do.

With both of them.