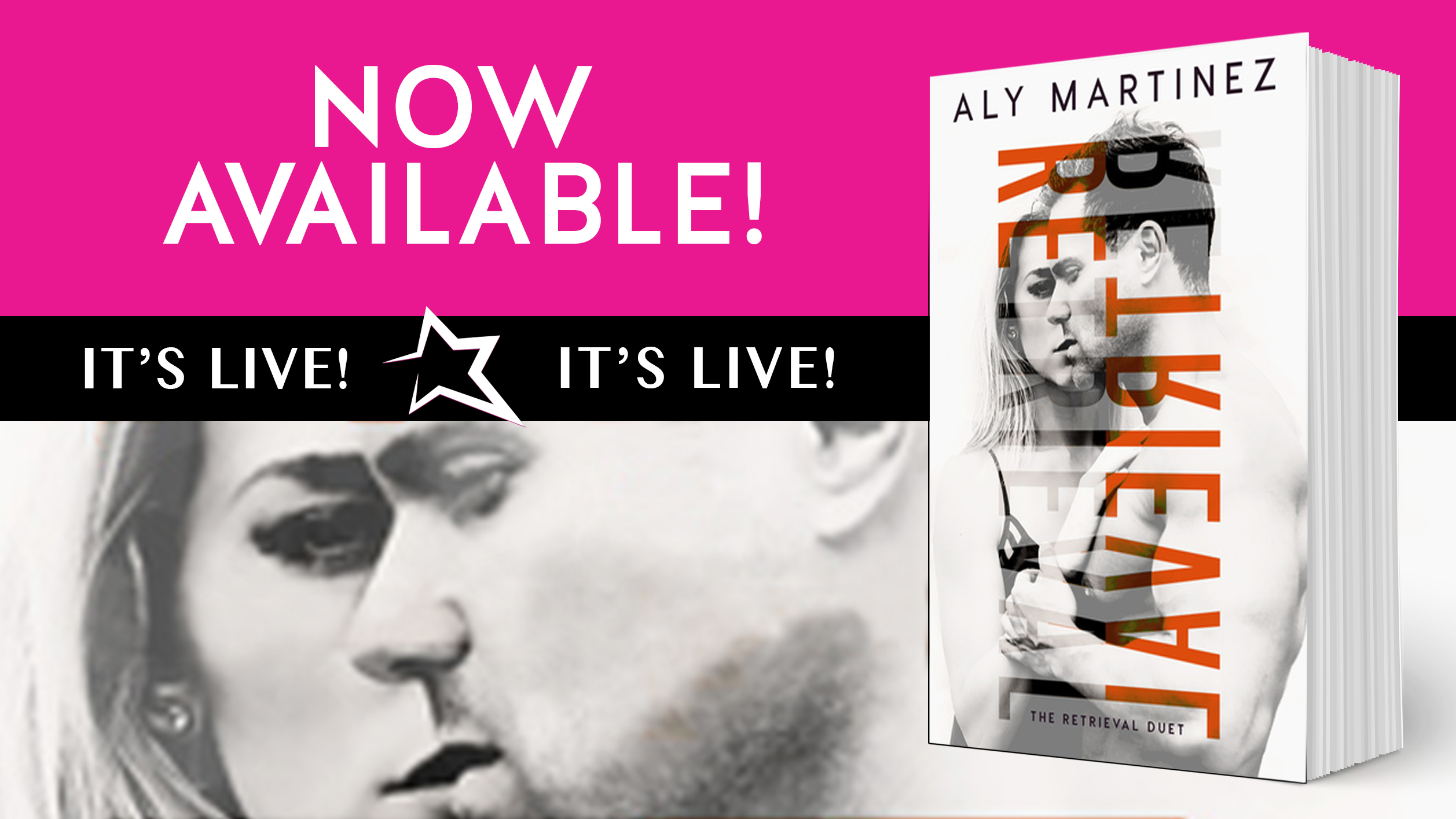 The Retrieval Duet by Aly Martinez is a two part series.

RETRIEVAL is NOW LIVE  and will bring readers the first part of this emotional second chance romance.

NOW AVAILABLE on the following retailers:

I proposed on our first date.

She laughed and told me I was insane. Less than a day later, she said yes.

It was a whirlwind, but we were happy…

Until we got greedy and wanted a family.

It was a life I couldn’t give her, not for lack of trying. Fertility just wasn’t on our side. We sought out doctors and treatments. Spent money we didn’t have. Lied to our families. Smiled for our friends. Put on a brave face for a world that didn’t understand.

Finally, we were successful…

Until we were forced to bury our son.

We were left broken, battered, and destroyed.

They say love is in the details, but it was the details that ruined us.

This is the story of how I took back what had always been mine.

The retrieval of my wife and our family.

“Where’d you get beer?” Elisabeth asked as she scrambled from the couch.

“Seth,” I replied, hanging my head and rubbing my eyes.

Jesus, I’d wanted to kiss her. She was being a bitch, spouting shit she didn’t mean just because she was too scared to let me in.

But, even through it, those plump lips were calling to me.

I’d never been able to resist that woman. Despite that we’d fallen apart, it hadn’t changed. The hum for her was still in my veins. It never went away, but for two years, it had been dormant. I’d packed it down so tightly that I’d hoped it had died. But, with one look, my body began thrumming like a live wire.

“Seth?” she asked as she bent over to straighten her tight, black pencil skirt.

It was a rare occasion to catch Elisabeth in something other than a perfectly pressed skirt and a pair of heels. But she’d been sleeping all day. It was wrinkled all to hell and back. The only thing her efforts succeeded in was drawing my attention down to her legs.

Legs that had spent many nights wrapped around my hips as she came while crying my name.

Shit. I should go.

But, after the way she’d latched on to me that morning, I wasn’t going anywhere.

“My assistant,” I answered. “I had him pick you up a bottle of wine, too.”

She blinked. “You have an assistant? Who delivers you beer? And your ex-wife wine?”

“No, I have an assistant who does whatever the fuck I need him to do. And, luckily for us, beer and wine happen to fall into the whatever-the-fuck-I-need-him-to-do category tonight.” She fought back a smile as I finished, “So do gyros.”

“Damn. I need to get one of those,” she mumbled to herself.

I smirked. “Cash my checks and you could afford one.”

It was a dick move, bringing up the money right then. But, despite her expert hand in decorating, that little starter house we’d bought with rose-colored glasses now needed a shit-ton of work.

Her back shot ramrod straight, fury crinkling the corners of her eyes as she snarled, “I’m not cashing your checks.”

I shrugged. “Guess you’ll have to figure out how to get your own wine and dinner after tonight.”

“I think I can manage,” she fired back.

“Suit yourself.” I pushed off the couch and meandered to the kitchen.

I went to the fridge and leaned in, searching for anything I could snack on. With the exception of at least a dozen Tupperware containers, she didn’t have much in the way of a quick bite.

Snagging a handful of grapes from the drawer, I made a mental note to send Seth to the grocery store after he’d delivered dinner.

Popping the grapes in my mouth one by one, I felt her watching me in what could only be defined as silent awe. I decided my best move would be to ignore it. “You know, I should have invented Tupperware. You alone could keep me in business,” I told her, retrieving a beer and then shutting the door.

She scoffed then muttered, “At least then I would have benefitted from you abandoning our marriage.”

Lava fresh off the volcanoes in Hell boiled in my veins.

I cocked my head to the side and questioned, “I’m sorry. Come again?”

“You should go,” she snapped.

I tipped the bottle to my lips, doing my best to calm the storm brewing within me, all while still fighting the desire to take her to the floor, plant myself between her legs, and remind her how that fucking attitude affected me.

Clearly, she had forgotten.

My cock had not.

“Roman, it’s been a crazy day. Please don’t do this tonight.”

“Do what?” I asked, leaning back against the huge, granite island.

She threw her hands out to the sides in frustration. “What you always do.”

I frowned and took another pull from my beer. “Haven’t been in our kitchen, drinking beer, in a long time. I hardly think it’s fair to say I always do it.”

Her eyes nearly bulged from her head. “My kitchen, Roman. This is my kitchen. Not ours. And you know good and damn well that is not what I’m talking about.”

My lips twitched as I pointed the neck of my bottle at her. “No. What I know good and damn well is that I have no idea what the fuckyou are talking about. Or why you’re slinging unnecessary and, might I add, undeserved attitude at me like a short-order cook at the bitch house.”

“He did not say that to me,” she whispered to herself.

When I lifted a shoulder in a half shrug, she swung a pointed finger toward the door and yelled, “Get out!”

I grinned, crossing my legs at the ankle. “You always were cranky when you were hungry.”

And that was the exact moment her head exploded.