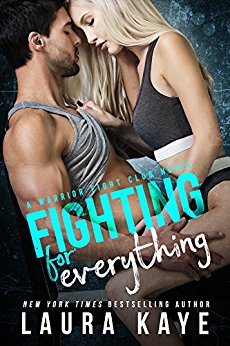 Loving her is the biggest fight of his life…

Home from the Marines, Noah Cortez has a secret he doesn’t want his oldest friend, Kristina Moore, to know. It kills him to push her away, especially when he’s noticing just how sexy and confident she’s become in his absence. But, angry and full of fight, he’s not the same man anymore either. Which is why Warrior Fight Club sounds so good.

Kristina loves teaching, but she wants more out of life. She wants Noah—the boy she’s crushed on and waited for. Except Noah is all man now—in ways both oh so good and troubling, too. Still, she wants who he’s become—every war-hardened inch. And when they finally stop fighting their attraction, it’s everything Kristina never dared hope for.

But Noah is secretly spiraling, and when he lashes out, it threatens what he and Kristina have found. The brotherhood of the fight club helps him confront his demons, but only Noah can convince the woman he loves that he’s finally ready to fight for everything.

*ARC received from Inkslinger in exchange for an honest review.*

Fighting for Everything (A Warrior Fight Club) is the first book in a brand new series by Laura Kaye about individuals trying to cope with the after effects of life as former soldiers. This is a friends to lovers story, one of my favorites. This story revolves around Noah, who has just come home from the Marines after suffering from partial deafness, blindness and brain injury from an IED explosion. He’s also struggling with a severe case of PTSD that cripples him more than even the physical limitations.Unable to cope with life after war, especially losing friends and fellow soldiers, Noah tries to control his life while suffering from anger and depression but not admitting it to anyone, especially to his best friend and the person who he is closest to, Kristina. These two have been through everything and Noah is afraid of bringing her down with him. But as he fights for his sanity, he’s also fighting his own desires for her, something they’d never brought into their relationship before.Kristina has always loved Noah and now that she sees him struggling, she tries to be there for him and fight these feelings that have been awakened between the two. But as the attraction grows, Noah is determined to push her farther away and keep her as a friend.  When he reaches a breaking point, he has to decide if he’s willing to get thehelp he needs or let his world come crashing down.“Sometimes you have to hit rock bottom before you can decide you want to get back up again. Are you there?”“God, if this isn’t rock bottom, I don’t want to know what is.”I can not praise Laura Kaye enough for her representation of these soldiers and the struggles they face trying to acclimate back to their home life after being through so much. I’ve been a huge fan since Hearts of Darkness and love her Hard Ink series. This is just another series that’s going into an automatic one click for me. I read thiswith tears in my eyes over Noah’s suffering and the pain Kristina went through, trying to get him to reach out to her as well. Both characters are well portrayed and the story is strong, emotional, and real. I would highly recommend a read.