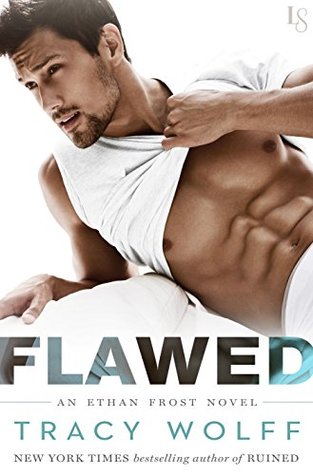 When Tori Reed loses everything, he sets her free.

I told myself I’d never trust Miles Girard, no matter how brilliant or sexy he may be. His sister, Chloe—Ethan Frost’s wife—is my best friend, but I know just how low Miles will stoop to get what he wants. Now he’s the last thing I want: my boss.

Growing up, I had it all—except for the sense that I belonged. And when a mistake from my past surfaces in the press, my parents don’t hesitate to cut me off.

But surprisingly, Miles offers me a helping hand.

Before I know it, our relationship turns unprofessional in the hottest ways. Of course, he still drives me crazy. But when I’m dealt the ultimate blow, Miles is there for me. And maybe he’s the one I’ve been looking for all along.

* I received an ARC from NetGalley in exchange for an honest review.*

Flawed is the fourth book in the Ethan Frost series but this book is actually about Tori, Chloe’s BFF and Chloe’s brother, Milo, who we are introduced to in previous books. Readers who haven’t read the other books in the series probably won’t understand the animosity between the two characters in the beginning as it’s only lightly touched upon. Honestly, after having read the other books in the series myself, I would say you can read this as a stand alone but it does spoil things that happened previously if you do end up wanting to go back to them. Plus, I loved Ethan so I was excited but nervous to read this one.

“This time when he lowers his mouth to mine, I don’t try to fight him. Instead I give myself up to the moment, to him, and to the knowledge that just because we’re flawed, just because we’re broken, doesn’t mean we can’t be perfect together. And that is all that matters.”

This is very much an enemies to lovers romance. Tori is a socialite/party girl who has had one too many bad dates and has decided to change her ways for the better. But one conversation with a bitter asshole ex and her life comes crumbling down. Her father disowns her and she has little choice but to rely on her friend Chloe’s generosity and move in to her old home while she decides what to do with her life. When she gets there, she discovers that Chloe’s brother, Milo has already moved in and they just butt heads throughout the entire book. It’s a little funny, but also annoying. Milo is this reclusive genius and if you read the previous books, you might understand why I wasn’t sure if I was going to like him or not but he worked for me. Tori got on my nerves a little in the beginning but slowly has me warming up to her and then annoyed me again towards the end before I get a very sweet HEA.

I loved the ending and the sexy parts in the book but it took time for me to warm up to both characters. I wanted a little more relationship between the two before they went from enemies to lust to sex to love. I also wish Tori wasn’t so damn prickly about what Milo does. It’s hard for her to realize that when people love you, they want to help and care for you which is different from controlling a person’s life. All in all, it’s a good end to a favorite series.