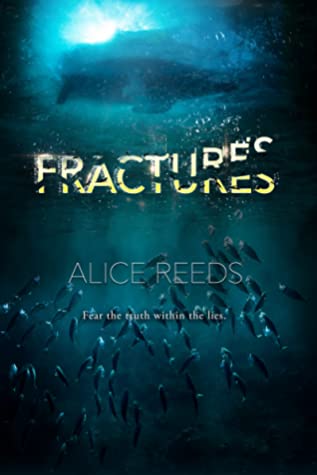 One minute they’re in Poland, subjected to gruesome tests they keep failing. No friends to support them. No family to claim them. No hope of ever living a normal life again.

Then suddenly, they’re trapped on an abandoned freighter in the middle of the ocean and forced to fight for survival. No food. No drinkable water. No way to get home. And strange memories of another life they don’t understand.

But how can they be living two separate lives, trapped in two separate places, at the same time? They’ll have to find the connection and uncover secrets that someone went to great lengths to keep hidden...if they’re going to survive long enough to find out who is behind it all.

*ARC provided by Entangled Publishing in exchange for an honest review*

Fractures by Alice Reeds is the second book and a continuation of Echoes, where we are introduced to Miles and Fiona who’s plane crash-lands on a deserted island and are forced to rely on each other to survive. I’d highly recommend that anyone wanting to pick this one up to read Echoes first as everything that happens, and characters introduced in the first book will effect the story.

Fractures is written in Miles POV and follows our two protagonists as they are saved from the island and now in the care of the FBI and Miles brother. Miles and Fiona believe that they are headed to California to live out new lives, and instead wind up in Poland being called Kellie and Oscar, back in the hands of Briola Biotech. When they arrive, they are told that Fiona and Miles never existed and everything they remember isn’t real.

Much in the same way as Echoes, the chapters alternate between being in the Villa, and an abandoned freighter with nowhere to run. As the two stories pan out, Miles and Fiona begin to formulate a plan to be free of Briola once and for all. But surrounded by lies, who will they know who to trust when you don’t what’s real and what isn’t?

I enjoyed all the twists and turns in the story, just like the first book and every page keeps you guessing until the very end. I was also glad that questions left unanswered from the first book were finally cleared up in a satisfactory way. There were points where I did feel the story stall a bit and back track to try and explain things from the first book, but honestly didn’t want to put it down because I wanted to know how the story would play out. It was a little off putting to go from Fiona’s POV to Miles POV and it took some time to get used to it, but it was also good to know what he’s been through, and get his side of the story. Both characters have gone through different kinds of abuse and you can see how they grew up and how the Briola experiment shaped them. It was nice to see that they got an ending where you can see them have a better life. 4 stars and I look forward to reading more books from the author.