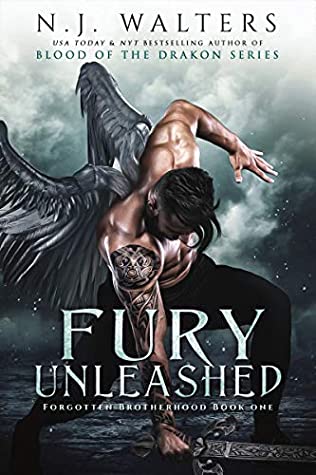 Maccus Fury, a fallen angel, is trying hard to keep his sanity. Seems being an assassin might be catching up with him. Now, Heaven, or Hell, has sent a beautiful assassin to kill him. Lovely. She’s pretending to seduce him, and he’s okay with that. She’s smart and snarky—but she has no idea what she’s walked into. And he’s more than peeved that they only sent one person. They’re going to need an army if they want him dead.

Morrigan Quill is one of Hell’s bounty hunters. She sold her soul to keep her sister safe, and now she’s working off her contract by catching bad guys and dragging them back to hell. When Lucifer makes her a new offer––that’s definitely too good to be true—she can’t say no. All she has to do is kill a powerful and crazy-hot fallen angel, who will totally kick her ass in battle.

If you are looking for an addictive paranormal romance then look no further. Fury Unleashed is the first book in the Forgotten Brotherhood series by N.J. Walters and I could not put it down.

First things first. Can we talk about how gorgeous that cover is? Seriously, you can say what you want about judging a book by it’s cover, this is one of those that I want a framed poster of. It’s glorious.

“People think Hell is fiery, but for me, it’s frigid. I’ve been cold for so long.” Her green eyes seemed to deepen in color, tugging at something inside him. “Being with you.” She rubbed her hands over her thighs, the nervous gesture almost endearing. “It’s the first time I’ve been warm in ten years.”

In order to save her younger sister, Morrigan Quill sold her soul to be a bounty hunter for 25 years, working off her contract by catching demons to drag back to hell. So when Lucifier gives her the ultimate offer to kill one guy and have her sentence completely wiped, she has no choice because if she fails, she will spend the rest of her contract being tormented in hell. At the same time, Maccus Fury, a now fallen angel, is being given a similar ultimatum from the Archangel Gabriel. Kill Morrigan and get his wings back.

When these two are thrown together, they can’t deny the instant chemistry. Knowing that she doesn’t have a chance in hell (no pun intended) in killing Maccus, she resigns herself to her fate. That doesn’t mean that they can’t have a little fun before that.

They’d only known each other for a couple of hours, but there was a sense of destiny about this moment, as though she’d waited a lifetime for it and for him.

Realizing that the two had been pitted together, and with demons and angels fighting against them, they have to fight together to discover the nefarious plot against them. As the attraction grows between the two, they’ll also have to fight the pull of their hearts.

“His mouth slammed down on hers. He didn’t kiss her; he consumed her.”

Not withstanding everything happening around us in real life, I didn’t want to stop reading. I loved Morrigan’s strength of character and her goodness shines brightly. Maccus is a fighter and protective of Morrigan. These two haven’t had a lot of good in their life and mesh so well together. The plot was so addictive and I was anxious to find out why these two were thrown together in this way and how they would be able to get their HEA without losing each other or their souls. I am so pumped to get the next book in the series and see more of these two, even as side characters. It’s been a while since I’ve loved a paranormal romance so much so I’d recommend it to anyone who’s been in a slump. Pick this one up!!

“No matter what happens,” she told him as she ran her hands up his chest to rest on his shoulders, “I’ll never regret this.” Going up on her toes, she kissed his chin. “They can’t taint this if we don’t let them.”