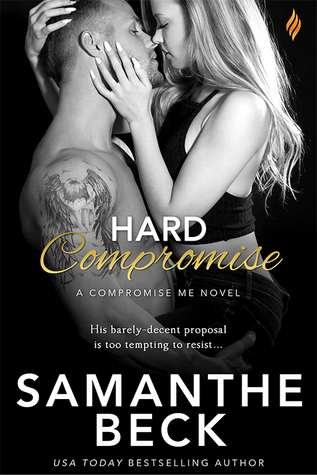 Laurie Peterson assumes her impulsive one-night stand with sinfully sexy Sheriff Ethan Booker is the biggest surprise of the year…until her bakery burns down while she’s basking in the afterglow. It looks like her dreams are up in smoke, but then Ethan proposes a deal too tempting to resist.

Ethan has no intention of settling for a one-night stand with Laurie. Nor does he want anything to do with the women his wealthy family wants him to meet. Not when he’s waited ten years for his chance to make his move. His deal might have strings—and Laurie may not know the stakes—but nothing will stop this sexy cop from staking a real claim on her body and her heart.

Another sexy romp in the Compromise series. Ethan is one sexy guy and knows what he wants. He’s been waiting 10 long years to get his chance with Laurie, and he’s not about to let her get away.“He could already picture her, breathless and ready as he braced her against the nearest surface and unleashed half a decade’s worth of repressed longings. Fuck her so thoroughly she’d have no standing to dismiss the event as a heat-of-the-moment hookup. He was coming for her. Her, dammit, and he hadn’t waited this long only to be shown the door after one energetic encounter.”Ethan is an alpha, and Laurie is snarky and sassy with some explosive chemistry. Serious sizzle action between these two. Ethan refuses to let Laurie pull away and he will do anything to make her open to him and be his. Four sexy stars.