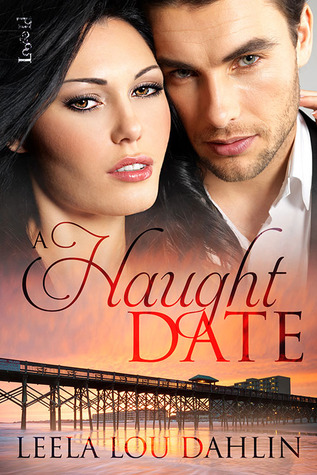 Gemmi Brooks was humiliated at the last family reunion when her boyfriend was found in bed with her cousin. With her self-esteem shaken, and to offset the pity party her family has been throwing in her honor, she invented the love of her life. Now the jig is up and she needs to find the boyfriend she’s told her family she’s been dating for the last 5 months.Camden Haught, the sexy bachelor and bartender/owner of The Haught Spot, is always willing to help a woman in distress, so when the local heartthrob offers himself up to play the role as her boyfriend he can’t understand why Gemmi’s so resistant. As he tries to convince her he’s the right one for the position he finds himself wanting more.Both of them have reasons to keep their emotions and this farce of a relationship under wraps, but as this pretend relationship turns to real passion, there’s a decision that has to be made. Should they take the risk to make this real or keep it as A Haught Date?

“His kiss was slow and lingering like he was trying to gather information out of her through her lips. The kiss grew in intensity. She grabbed his hair, holding him close and reveling in the way his lips tugged at hers and demanded more while still so gentle.”Gemmi’s life took a tumble when during her last family reunion, she finds her boyfriend and cousin in bed together. Ever since, her family has been trying to set her up with another guy so that she won’t be single anymore. Problem is, Gemmi is in no way ready to be in another relationship and get hurt. So what to do when the next family reunion is around the corner and she’s lied and told her family she’s seeing someone? Gemmi’s friend True comes up with the idea to set her up with the perfect guy. Unfortunately, Gemmi thinks he’s too perfect. Camden is sexy and has women falling at their feet for him. Plus, his last name is Haught! She just wanted a simple guy to pretend to be her boyfriend, not a guy with killer good looks that could have any woman he wants. The sparks fly between these two immediately but she’s wary.Camden Haught is too good to be true. Volunteers at the animal shelter, works with his brothers at the bar, sexy as all get out. So why does this sexy guy seem to be hiding secrets and holding himself back from having a relationship? As Gemmi and Camden get closer, she becomes more and more intrigued by him and can’t help herself from developing feelings for him. Camden can’t either but something stops him from acting out and trying to make this more than just friends with benefits. Both have their reasons as to keeping this a friends only deal but the chemistry between the two is undeniable. I genuinely liked both Gemmi and Camden, along with the rest of the cast of characters introduced in the book. Her friend and boss, True, along with his brothers made this a fun read. You can see there’s definitely enough to make this into a series and I hope it happens. I didn’t like the fact that Rosy acted like a high schooler, being immature and having done what she did to Gemmi for stupid reasons. I also didn’t appreciate that the family didn’t toss her out on her ass and made Gemmi feel like she was at fault for not being able to hang on to her boyfriend. I look forward to reading more books from this author. I think the pacing was good, the characters likable, and the story sweet, sexy and spicy.