His Wranglers fit him like a glove. A really tight, leaving nothing to the imagination, glove. Codie wants nothing more than to shove that Wrangler-covered butt straight into the mud.

Ace Valentine has a smart mouth, a devil-may-care attitude, and those wicked eyes aimed directly at her.

She doesn’t know what to do with that kind of attention. Especially not from the sweet-talking man that has no problem charming every woman that enters his orbit—everyone but her, at least.

Ace isn’t sure why Codie Spears had her panties in a twist when it comes to him, but every snub and insult she hurls his way brings him closer and closer to falling for her.
He’s not sure what it is about the town’s bad girl that draws his attention, but every encounter they have leaves him wanting her until there’s nothing else left to do but have her.
The only thing is, she’s been convinced by everyone around her that she’s not good enough. Tell a person that she’s a piece of trash enough times, and eventually she’ll start to believe it. It’s going to take a lot of smooth-talking and gentling on his part to get her to see that she’s worth it. And once he has her where he wants her? Well, she’ll make a mighty fine rancher’s wife.

“I couldn’t begin to thank the Lord enough for the invention of Wrangler jeans.”

Can I say how freaking excited I am to get this series!!!? We are introduced to the Valentine’s family in Double Tap (Code 11-KPD SWAT #2) where we get Georgia, their sister’s, love story with Nico. Now married with several kids, it’s the brothers turns to get their HEA. If you haven’t read Double Tap, it isn’t required to read but it does delve in deeper as to what happened to them as kids.

The book actually takes a step back in the LLV timeline. If you’ve been reading the other LLV books in release order, you’ll see some characters from prior books have aged down and Nico and Georgia’s kids are small…and demons…It was so funny to see a 16 year old Katy Roberts giving her dad grief.

Even after leaving Kilgore, Codie returns to help her ailing grandfather with the ranch, trying to shake the stigma of having been the town troublemaker. While she’s been on the straight and narrow since the day of the tragic events that occurred in the Valentine home, it’s time to prove it to the town and herself.

Ace is just trying to keep his family’s business afloat while still dealing with ghosts from the past. After everything his family went thru, his girlfriend dumps and that’s left a burn that hasn’t gone away.

When Codie and Ace meet over a bull named Scooby, these two never would have imagined how much there life was about to change. Codie doesn’t believe herself worthy of loving and Ace feels something is broken inside him. These two falling in love is achingly sweet and utterly perfect.

“…You made me fall in love with you…You made me see that I was worth loving. That sometimes, though love is scary, it’s worth the heart palpitations.”

I love what LLV does with her lawmen, bikers and military men and I am in love with cowboy’s. I need more of these Valentine men ASAP. 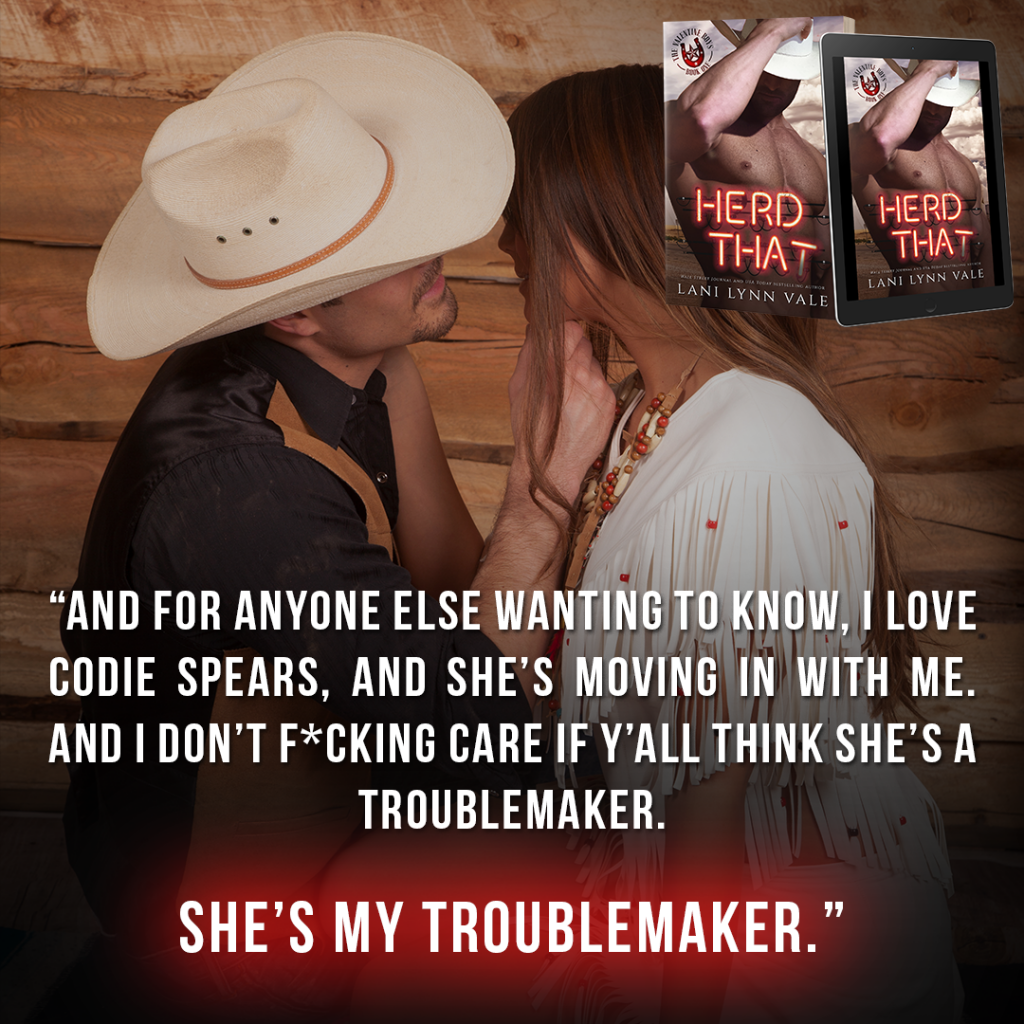