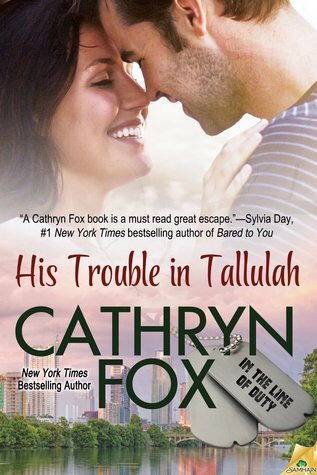 His Trouble in Tallulah by Cathryn Fox
Series: In The Line Of Duty #2
Genres: Contemporary Romance

When faking it takes on a whole new meaning…

In the Line of Duty, Book 2

Tallulah Duncan is excited about her brother’s upcoming wedding in Louisiana, but what she’s not looking forward to is facing the man who will undoubtedly be waiting for her. Years ago she and an old boyfriend made a pact. The next time she comes home, if she’s still single, they’ll get engaged.

He’s a nice guy, but Tallulah doesn’t love him—or the idea of being an undertaker’s wife. And the smokin’ hot guy next to her on the plane is a loud-and-clear reminder that her biological clock is on the fritz.

Security specialist Garrett Andersen is pretty sure the gorgeous woman next to him on the plane is about to have a panic attack. And when he tries to distract her, she does the most enchanting, adorable thing he’s ever seen. She blushes.

Since they’re headed to the same wedding, he finds himself agreeing to step into the role of adoring fiancé. In real life, she’s his comrade’s kid sister, so it’s hands off all the way. Except behind closed doors, her all-out campaign of sweet seduction is burning that strategy to ashes…

Warning: This book contains some very hot, very steamy sex, with a smokin’ hot security specialist who knows just how to hit his mark—and make it explode. Did we mention it was hot?

Ladies, before I begin, let me just give a word of warning. Be sure that while you’re reading, have some ice, maybe a pleasure toy or maybe your man, not too far away. I was riding the train the other day and at about 30% in and my kindle was steaming. So much so that my cheeks were red and unknowingly, I was fanning myself. To the point that the guy across from me, a total stranger and not to shabby looking, leaned over to me and said “They should really crank on the AC in here, right?”….. I had to stop until I got home. LOL. Ok, so on to the rest of my review!

“Heat thrummed through her bloodstream and, despite her better judgement, she found herself opening for him, welcoming the kiss and all he had to offer.”

So I’m guessing from the above that you’ve figured out that this very steamy. No? Yes? I thought so. What you don’t know is how funny, sweet and sexy it also is. Tallulah (love the name) is going to her brother’s wedding in Louisiana and she’s terrified. She’d made a pact with an old boyfriend that if she came home single, they’d get engaged. Oh gosh. Engaged to a mortician!! Lu is in a bind until her sexy seat mate Garrett, who is also in need of some help, might just be her ticket out of it. They agree to help out and pretend to be engaged. Behind closed doors, Tallulah finds him way too tempting and they take their “engagement” to the next level. *fans self* I loved Lu.

You see how she starts to gain confidence in herself and grows through the book. This is mostly because of Garrett and how he begins to make her feel like a sexy, mature woman. Garrett also begins to believe in himself and let go of demons in his own past.

“Garrett had taught her to stand up for herself and fight for what she wanted. Tallulah believed in Garrett, even when he didn’t believe in himself.”

These two worked beautifully to me, although I will admit of having the desire to smack Garrett upside the head at one point. Hey, he’s a guy. It’s to be expected. LOL. I forgave him though. Especially that very sweet, very funny ending. 😉