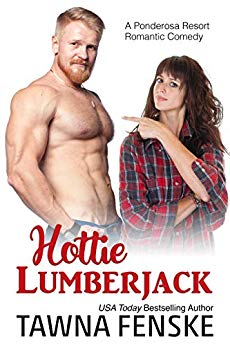 When Mark Bracelyn lumbers into Chelsea Singer’s cupcake shop with an axe, she’s poised to hit the panic button. But he fixes her door, praises her buttercream, and sends her skittish heart pounding like a hammer on a hollow log, so he can’t be all that scary. Chelsea’s sure there’s a gooey marshmallow center under Mark’s tough outer shell, though admittedly she’s been wrong before. Mark may look like a grungy lumberjack, but he’s also the wealthy part-owner of Ponderosa Luxury Ranch Resort. The lone Bracelyn heir to avoid a childhood of fancy boarding schools, he stays hidden behind the scruffy beard and battered truck. But something else separates Mark from his siblings, and keeping his guard up means keeping his secret—and his family. When someone threatens Chelsea and her daughter, Mark becomes their personal protector. When he’s not watching her back, he’s watching the rest of Chelsea’s body and warning himself not to touch. With danger mounting, they bond over phallic cupcakes and bizarre bunny behavior, while Mark battles his surging attraction. Can a sweet-toothed mountain man and a cautious single mom escape their histories, or will their hearts land on the chopping block?

He’s too fixated on his cupcake, savoring every little mini-bite like it’s an act of worship. This shouldn’t be getting me hot, right?

Hottie Lumberjack, book four of the Ponderosa Resort series, is a rom-com delight. Each book can be read as a stand alone as each one follows a different sibling, but the books are a riot and I would definitely recommend picking them up. This one follows the misadventures of Chelsea, a single mom and creator of amazing cupcakes, and Mark, a yummy and gruff lumberjackesque billionaire with a love of sweets. Match made in sugar heaven.

The sheer joy in this man’s eyes is enough to make my hand shake as I place it in the center of his massive palm. He lifts it to his mouth, and I swear on my KitchenAid mixer, I have a mini-orgasm. If the way to a man’s heart is through his stomach, the way into my pants is through a man’s sweet tooth. What? No, I didn’t just think that.

As a single mom of an inquisitive seven year old girl, Chelsea hasn’t had any time to date in the last couple of years but one look at Mark, and she’s willing to give it a chance. Who wouldn’t fall for a guy who goes all gooey over cupcakes and doesn’t flinch when she mentions having a daughter. The interactions between Mark and Libby are priceless and some of the cutest moments in the book. Seeing a big, burly, gruff guy absolutely melt when it comes to a little girl is pure gold.

“Neutered?” Libby scrunches up her nose and studies the other end of the rabbit.
“That’s where they cut off his boy parts to make him behave better,” Mrs. Percy offers helpfully. “To make him a nice boy.”
Chelsea tries unsuccessfully to stifle a laugh while Libby turns her attention to me. “Did it hurt?”
“Did what hurt?”
“You brought us donuts, so you’re nice,” she says. “Did it hurt when they cut off your boy parts?”
Oh, Jesus—Chelsea’s flat out laughing now, not even trying to hide it.

The family dynamic with the Bracelyn siblings is such an integral part. Mark is sort of the odd duck in the group. He doesn’t look like his other siblings and there’s always been this doubt in the back of Mark’s mind whether he really belongs. But his siblings, especially Bree, adore him and the teasing it pure sibling love. My favorite scene is them playing poker and getting interrupted by Libby. That kid is the cutest and steals the show. Chelsea also has her own issues as childish pranks turn into something scarier and she’ll have to figure out if secrets that she’s held on to might try to come between her and her HEA.

Good Lord, this guy has massive hands. He makes my mini cupcake look like a chocolate chip.

Filled with humor and mystery, this was a great read from beginning to end. I am so looking forward to reading more from this talented author and more in the the Ponderosa Resort series. Five- laugh out loud – stars.