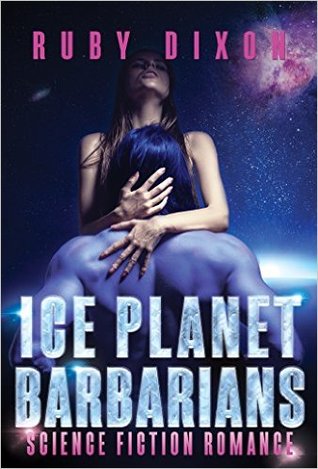 All right. I have to admit that I am totally obsessed with this series. To the point that I binged all six books plus the novella in about three days. Yeah. I was going to sleep at 3Am and waking up at 8am and doing everything with the Kindle in my hand, still reading. I also have to admit, I’m not a huge sci-fi or even alien romance reader. I’ve never really gravitated towards them. The second I read the blurb for the first book and saw it was 99 cents, I had to check it out. There was really nothing to lose.

Twelve human women are abducted and placed on a ship to be sold as slaves. On the way, the ship malfunctions and they crash land on what seems to be a barren, icy planet. The alien captors have jumped ship and they’re left behind the humans to die or be collected at a later date. They’re not sure. In desperate need of food, shelter and warmth one of the ladies ventures out and meets a hunky blue alien. The woman are saved but to survive on this planet, they must they have to take in a symbiont, that sort of rewires them to be able t acclimate to this freezing world and the air. The symbiont (Khui) also wires them to find a mate so each of the stories is a pairing off of two creatures that have to learn about one another. Humans trying to assimilate and aliens learning some of the human customs. Their race (Sakh) are essentially on the brink of dying before these women came so they are ecstatic. Like penguins, once they find their other half, they mate for life

I want the next book! The plot is excellent, the writing and the characters, especially the human woman, is so engrossing. Each woman is going through their own issues, and not just those of landing in this strange place and trying to survive. I don’t actually want to say what because you learn it as the series progress and it sort ruins it if you know beforehand. Each book is a stand alone but definitely have to read the first book because it sets everything up and you learn a lot about the woman in this book as well. Each book just gets progressively better. Right now they are available to be read through the Kindle Unlimited program and I would say check these out. As for me, the whole series is five stars and I am in dire need of the next book.