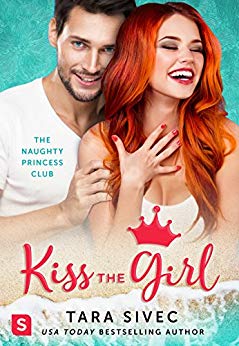 A struggling antiques collector finds herself falling in love with a millionaire playboy; but can she ever be a part of his world?

Meet the Naughty Princess Club, a series from USA Today bestselling author Tara Sivec that brings readers to Fairytale Lane and the hilarity—and romance—that three women fall into once they decide to strut their stuff and bring on their own happily ever after.

While her friends have broken free of their insecurities, Ariel Waters is struggling to come out of her shell. Her ex-husband took away her voice and her self-confidence, and Ariel is drowning under a sea of debt to afford the alimony she has to pay him. She refuses to ever fall for a man’s charms again, and is determined to make her own way.

When her house and her beloved antiques are taken by the bank after too many missed payments, Ariel finds herself adrift until the infuriatingly charming Eric Sailor comes to her rescue. Although she can’t stand the millionaire playboy, Eric’s kindness and unconditional support reveal hidden depths and a love that Ariel never imagined she could find.

But there are outside influences who will stop at nothing to keep them apart; can Ariel and Eric weather the storm and find a way to be together?

Kiss the Girl is the third and final book in the The Naughty Princess Club series by the Queen of RomCom, Tara Sivec, and may I say, this book is everything. I could not stop laughing. I love the twist when it comes to taking Fairytale characters, bringing them into a modern light, and letting out their adult personalities. Added to the fact that three characters in the books are running their own stripper service after they each fall on bad times, it’s perfection. Tara Sivec has the perfect line to explain the series. They are “three princess who saved themselves, while slaying in stilettos.”

“Piss off. I’m not difficult. I’m a fucking delight.”

So I have always loved the Disney version of The Little Mermaid mainly because the original version, she sort of gets shafted and I always felt bad for her. The fact that Tara made me see Ariel in a whole new light is the reason why I continue to be one of her Tara’s fans. Ariel (the book version, not the movie), is this brash, almost harsh and abrasive, foul mouthed, tell it like it is, person and it is absolutely hysterical. First off, how did I never think of Ariel as being a hoarder? She has a collection of antiques in a house filled to the brim with these things and until I read this, I never saw the movie and was like “this girl has a hoarding problem” until now. I just love her spouting “I hate people” and all the wonderful f-bombs throughout the entire book. But behind this hot headed and foul mouthed woman, lies a girl that lacks self confidence in herself and the story follows her getting that back with the help of Eric and her fellow princess/business partner friends who help draw it out of her that she is a beautiful and good person.

“You think you have to be this hard-ass, independent woman who can take care of everything on her own, but you don’t. You have people around you who love you and want to help you, especially Eric.”

Now I’m not going to lie, it took me a bit to like Ariel but I also think it was because it took the character a bit to like herself too. While she never stops the swearing and anger issues (I died laughing over the Tiny House rant because I feel the same way), she just becomes so much more by the end of the book. The fact that Eric sees what she has under that rough interior and tries to bring it to the surface, while she is completely oblivious to it, made me love these characters.

I so hope she does more Fairytale mashups, even if it’s an entirely different series because I am so down for it.