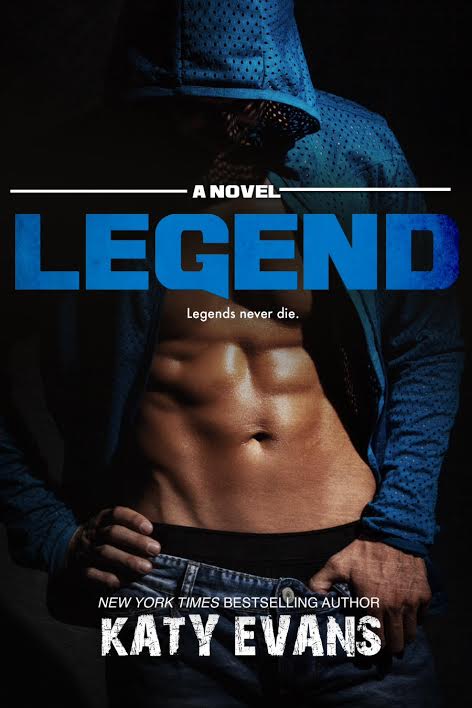 Maverick “the Avenger” Cage wants to rise to the top and become a legend in the ring. Though he keeps his identity well guarded, he's known on the fighting circuit as the new kid with a chip on his shoulder and a tattoo on his back that marks him as trouble. He's got a personal score to settle with the Underground's one and only Remington "Riptide" Tate.

As Mav trains, he meets a young girl—the only other new person in the town--and sparks fly. When things get heated between them, he finds out she's none other than Reese Dumas, the cousin of Remington Tate’s wife. A girl who's supposed to root against him and a girl he's supposed to stay away from.

But Maverick fights for the woman in his heart, and the monsters in his blood. The world’s eyes are on them and the victor will go down in history as the ultimate fighting champion; the ultimate LEGEND.

*ARC received from the author in exchange for an honest review*

Since reading the first book in this series, I have been absolutely addicted to it. Remy is in my top ten book boyfriends EVER and anytime I’m in a book funk, this is one of the series I gravitate to reread. I’m seriously addicted to it, so this book is bittersweet to me. I have been dying to read this book, terrified to read it, and sad to read it. Yeah, can you say confusing? So, dying to read because I love the series, and sad to see it go, but terrified because we now have a contender for Remy for the champion of the Underground. I can’t root for someone to beat Remy, can I?

“I edge a little closer, my heart pounding, fear choking me. His hands are on my hips. Spanning my waist. All it takes is a match to light a fire, and He. Is. The match.”

Maverick Cage, how I adore thee. Your passion, your pain, your resolution to be more than your past. Damn it, man. How dare you make me cheat on Remy? I can have you both, right?! Sure I can. I’m making it so.

I devoured this book in one sitting then went back and reread it again. I’m sitting here, book in hand, skimming through all the lovely highlights I made (because there are a lot) and before I realized it, had started reading it again. There is not one single word that I would change in this book except that it ended. That’s it. From beginning to end, I fell in love. Remy, Maverick, Reese, Oz, Racer, Brooke. These characters have embedded themselves deep into my heart and soul.

“I want to protect her… That’s how much I care about this girl. Guess I’m not emotionally stunted after all. Guess it just takes a second to realize what stares you in the face, slamming you like a punch in the gut. She wanted a friend in me. I’ll be her friend, but I want so much more.
“You see her,” I whisper to Oz, and he frowns and nods.
“That’s her. That’s my girl.”

Reese Dumas, the lovely cousin of Brooke Dumas, is an amazing character. Sweet, funny, determined and, when you finally really know her, an inner strength that surprised the hell out of me. She’s this character that begins tentatively, testing the waters, and we are not exactly sure what her role is going to be. She sees herself as nothing, as unremarkable and yet, in a moment, changes Maverick’s life and gives him a chance to show who he can be. She sees him follow her into her gym and covers him for him, telling the staff that he’s with her and guides him to a trainer that might give him a chance to be a fighter, after he’s been shot down by so many others. She is light and goodness and worthy and I love that Maverick sees that’s what she needs and what she is.

“I think of that nice girl who doesn’t want to be nice. A girl who wants to be unforgettable and doesn’t realize, she already is.”

I started this book not wanting to root for Maverick and ended it rooting so hard for him that if I had been at his actual match, I would have been hoarse from screaming. His past holds him back but he is determined and stubborn to not allow it. Trying and failing to find someone to give him that chance to fight until Reese helps open the door. Finding Oz as a trainer, another character fighting demons, to be a champion, to shed his past and make his name mean something. Even Remy looks at him and sees, not only someone who is a competitor, but someone to respect. That last scene, that moment in the ring, and everything leading up to it, had me so damn choked up, I could not hold in the tears. I found another reread. I adored, A-D-O-R-E-D, this book and five stars will never be enough for this Legend. Maverick, welcome to my top ten BBF’s.