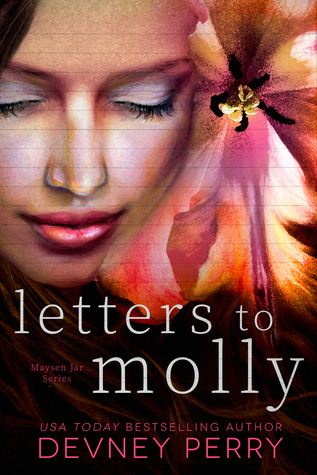 Molly and Finn Alcott had the picture-perfect marriage. With two gorgeous children, a lovely home and their own business, they were the couple others aspired to be. But when news of their divorce spreads through town like wildfire, it sends their beautiful image up in flames.

Molly spends years mending her broken heart. She finds joy in a life centered around her kids and career. Her happiness has a different picture now.

Then one day, she finds a letter in her mailbox. Written in Finn’s handwriting, dated over fifteen years ago, it’s a letter he wrote Molly after their first date.

Week after week, Finn’s letters appear. Each marks a date in their history. Each holds the confession of the man who still owns Molly’s heart. Each heals a wound from their past.

It’s just too bad Finn isn’t the one sending them.

Letters to Molly is the second book in the Maysen Jar series and I have to say, I was really apprehensive to read this. Having read the first book and knowing what Finn and Molly had already been through, I really had no idea how their story was going to play out. After finishing, I don’t know what to say other than this is the best book I’ve read this year.

”What had caused our divorce? What had taken us from a place where all I needed to get through one of the hardest moments of my life was one glance at her?”

So if you haven’t read the first book, this is a standalone and it’s not necessary to read it but it is a favorite of mine and it does give back story to what led the couple down this road so I would recommend reading it first. However, that’s entirely up to you.

“My heart can’t take another ending with you.”

Molly and Finn were once happily married but their marriage led to a very bitter divorce between two people who both love and hate the other. I’ll tell you the truth and say, I love second chance romances but after reading the first book, I never thought I would read a book with these two. How do you mend something so broken? How do you heal a heart so broken? Because while the two have been divorced for years, neither one has moved on. And it is so painful and so poignant to read because you feel their pain in every page of having lost something so big. So when Molly begins to receive letters that Finn wrote so many years ago, it opens up a dialogue between the two that is so long overdue. It’s a bittersweet, emotional roller coaster that made me feel like I should be clasping my hand to my heart because it felt so much for both these characters. I physically refused to put this book down until I turned to the last page. Because even though it hurt to read some of the things they went through, I was in suspense because I didn’t know how they would be able to mend such a riff. And the mystery of who is sending these letters is so well done because it really left me guessing the entire time.

“My love for Finn wasn’t going to stop. I could tell myself and others I wasn’t in love with Finn. It was all lies. I’d buried that love deep, shoving it down whenever it threatened to appear, but it was still there. It had always been there.”

This book is so far above and beyond five stars. Devney Perry has an amazing gift to make the reader feel so much for her characters and I felt every word in the very bottom of my heart. Grab a box of tissues, lock the door, and flip that do not disturb sign because you will not be able to put this down.