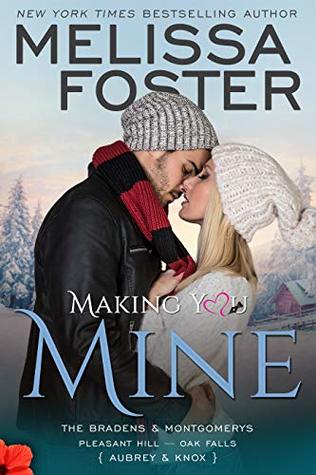 Knox Bentley never liked the pomp and circumstance that came with being wealthy. He'd distanced himself from his pretentious family and their fortune as a young adult and found his own path to success. But even with the world at his fingertips, he realizes something is missing, and after a long stay overseas, he finally knows exactly what it is. His no-strings-attached hookups with Aubrey Stewart, an exquisite and stubbornly independent blonde, are no longer enough for him. They connect on every level, but Aubrey is a fierce businesswoman with a new movie channel on the horizon and no time for much else. She is the deal he can't close, the precious jewel even his billions can't buy. Now that he's back in the States, he's determined to show her that what they have goes beyond the bedroom and finally make her his.

Making You Mine is a stand alone romance novel in the
The Bradens & Montgomerys: Pleasant Hill – Oak Falls series. I’ll admit, I’ve read a lot of Melissa’s Foster’s books but haven’t started this series yet so I was kind of thrust in to Knox and Aubrey’s already established “friends with benefits” relationship. However, it didn’t really detract from the book. It was actually sort of refreshing to read a book with characters who already know one another so intimately.

Knox and Aubrey have been together for two years and Knox is determined to get her to see that they can take their relationship to the next level. Aubrey is an independent business woman and doesn’t want all the drama having a relationship will bring into her life. She’s happy with their no strings attached agreement. She can’t deny that Knox is very tempting and he can be very persuasive.

Knox is swoon worthy as he tries to convince her what they can have together. Stranded at an Inn, things get hot as Knox uses all his charm to convince her that dating and being a couple won’t add drama, just make what they have better. Seriously, I can’t emphasize how super swoony Knox is. The entire book is a joy to read. A perfect blend of hot and sweet, as the two learn more about each other outside the bedroom. There is a huge cast of characters from previous books and series and I love seeing relationships grow and the potential for other’s in the future. I already pre-ordered Carly and Zee’s book just from the brief interaction in this book and I’m excited to read. 4.5 swoony stars.

Tags: Making You Mine, Melissa Foster