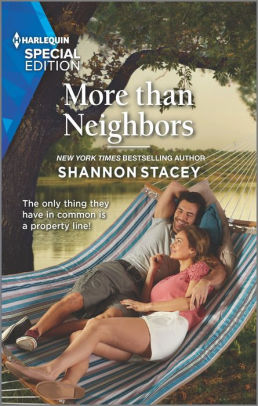 The only thing they have in common is a property line!

He’s trying to uncover his past.

She’s hoping for a brighter future.

Cam Maguire is in Blackberry Bay to unravel a family secret. Meredith Price has moved next door with her daughter. He’s unattached. She’s a widowed single mom. He’s owned by a cat. She’s definitely team canine. All these neighbors have in common is a property line. One they cross…over and over. And Cam thought he knew what he wanted—until his family’s secret changes everything.

*ARC provided by Harlequin in exchange for an honest review*

More than Neighbors, the first book in the Blackberry Bay series,  is a supremely sweet romance. I mean, how can you not love a book with an adorable bookworm kid, a snarky cat and his equally snarky new owner?

Widow Meredith Price moves back to Blackberry Bay, New Hampshire with her six year old daughter Sophie and their dog Oscar, so that they can be near Meredith’s parents and try to continue healing after her husband passes. When they arrive, they meet their new neighbor, Cam Maguire. Cam has reluctantly found himself in Blackberry after the grandmother he never knew, dies and leaves him her house and her contemptuous cat, Elinor. While Meredith and Sophie try to find their place in their new home, Cam struggles to find out the secrets of the family he never knew, all while dodging his parents and their expectations for him.

Little Sophie is not shy when it comes to Cam or his cat and slowly worms her way into his life and heart and he and Meredith begin a reluctant friendship that leads to developing feelings between the two. But Cam’s plan was never to stay and Meredith’s heart can’t take another loss.

“Hugging is nice,” he said so quietly it was almost a whisper.
“Yes, it is. And hugs are important, too. Humans need hugs sometimes.” “Kissing is also nice.”
She laughed, the sound partially muffled by his suit coat. “So are cupcakes, but you don’t have any of those, either.”
“If you had to choose between kissing or cupcakes, which would you choose?”
“I guess it would depend on who I’m kissing. And also what kind of cupcake.”

I loved this book so much. It’s such a sweet and funny, slow burn romance. Meredith and Cam are both reluctant to get into a relationship for their own reasons but can’t stop the pull between them. You can literally feel the heat emanating between these two. Sophie is such a delight. Sweet and charming, a little bookworm who was desperate to find a library when she gets into town. It’s so cute when she realizes Cam doesn’t have a library card and insists that he get one. He’s so enamored by her and the feeling is mutual. Elinor and Oscar add their own dynamic as Elinor has lots of personality and likes to bully Oscar. And I loved how Cam gets to know his grandmother thru her old journals. It’s just so poignant.

Honestly, if I have’t said it enough, it’s really sweet, great pacing, irresistible characters and an unforgettable story. I can’t wait to read more in the series. 4.5 Stars.