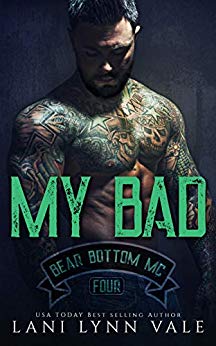 One, he’s not relationship material. Two, the nurse that treats him for erectile dysfunction is the most beautiful thing he’s ever seen, and practically has ‘the marrying type’ stamped on her forehead.

Does that stop him from wanting her? No.

Unfortunately, he learned a long time ago that Army Delta Force and long-lasting relationships don’t go hand in hand.
But beautiful hazel eyes, curly blonde hair, and the prettiest lips he’s ever seen play havoc with his resolve, making him forget his earlier convictions.

All it takes is one teeny, tiny kiss for every shred of control he has to disappear, along with the problem in his pants.
Soon he finds himself doing things that he knows that he shouldn’t. He doesn’t know that he’s found the woman that’s meant to be his. Nor does he realize that her father is the man he’s idolized from the moment he joined the army at the age of eighteen. Because, maybe if he had, he would’ve tried a little harder to ignore the pull he felt between them instead of making her his the night before he deployed for six months.

He also might’ve tried a little harder not to knock her up.

*ARC received from Inkslinger in exchange for an honest review*

I’ve said it before and I’ll say it again, Lani Lynn Vale can do no wrong. From her funny chapter headings, to the glimpses from other couples in past stories, I’ve loved all of her books thus far and My Bad is no exception.

“Here I am, not giving a single fuck that you own me.”

Pru is wary of getting involved with military men but Hoax makes it extra hard to resist giving in and throwing out all her rules. The chemistry between the two is instantaneous, given the fact that he goes to the ER to try to fix his *cough* condition, and is immediately cured upon seeing Pru. Fight all she wants, he’s not letting her get away.

Hoax is on temporary medical leave from Delta Force, a secret faction of the military, so to speak, and a bit of a nomad. But for the first time, on meeting Pru, he resents having to leave on a mission. They have a limited time together but he’s going to make every minute count in winning her.

“Telling people your favorite part of your job is ‘I sometimes get to shoot people’ isn’t something you should start a conversation off with.

Every LLV book has elements of funny moments, drama, and very real characters you can’t help falling in love with. This was another unputdownable book as so many of hers are. If you love a good Vale book, you’ll love this one. Swoon, Hoax.

“Not having you there to talk to, to hold, or to feel? That was debilitating. I felt like I lost a piece of my soul when I got onto the plane, and I’d only known you for a few weeks.”