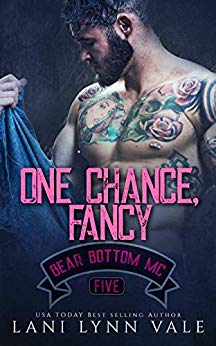 Benson Bayou Beauregard is the president of the Bear Bottom Guardians MC, and the grandson of the Sergeant at Arms for the Dixie Wardens MC. He’s a mountain of a man and the warden of a prison, and there’s only one thing that can scare him—being told that he’s the father of a three-year-old little girl.

A three-year-old little girl that has no clue who he is. Hell, he only finds out about the little cherub when a woman from child protective services comes by and rocks his world before leaving the girl in his shocked arms.

Every single thing he thinks he knows goes up in a cloud of smoke.

To make matters worse, the woman that he’s been trying to convince to give him a chance takes one look at the little girl and tells him that he’s just not in the right place to handle both of them.

But Bayou was never one to back down from a challenge.

He can handle a three-year-old girl that acts exactly like him, and he can more than take on the fiery red-head that sets flame to his blood while he’s at it.

*ARC provided by Inkslinger in exchange for an honest review.*

“I’ve wanted you, needed you, for a very long time. And I know that you feel the same.”

Every time I read a new book by Lani Lynn Vale I think “who am i going to fall in love with next?”, and while I’ve loved each and every one I’ve been introduced too, I think Bayou may have topped them all.

“When you were fifteen, I bet you didn’t have any idea in the world that you’d changed my life,” he said softly. “I bet you really didn’t think about the consequences of treating a young man like me like a normal, down to earth human being. But, whether you knew it or not, you changed my life. You made me think.” He licked his lips. “I kept telling myself over the next year, if she thinks I’m normal…if she thinks I’m worth saving…if she thinks that I can do it…then I can do it. I am normal. I am worth saving.”

Bayou (Benson) has Asperger’s but he does not let it run his life. Socially awkward as a kid, he worked hard to overcome his issues and is now the Warden of the prison after having left the army. The person who helped the most, though, was Phoebe, or who he likes to call, Fancy. Having met when they were young, she was one of the few people to care enough to talk to him and make him feel like a normal person and it made him want to overcome his short comings. When his cousin and her sister end up together, they reconnect, even though he tries not to. Phoebe isn’t having it though. She’s been in love with him since she was 15. He wasn’t going to get away that easily, even if she had to settle for a friendship. But when fate throws Bayou a curve and he ends up with a three year old daughter who is much like him, their relationship goes from zero to a hundred, and it’s her confidence in him that he can do anything that makes him stop fighting the feelings that he has.

“You’re mine, and fate found a way to bring you back to me again.”

Isa is a special little girl and I couldn’t help but fall in love with her as much as Bayou. While she may not talk, her personality begins to shine thru as she connects with Bayou and Phoebe. Moments of her waking up abruptly, a little scowl on her, clutching a blankie, melt at the heart strings. The connection between Bayou and Phoebe is always there, even when they’re just friends. When he stops fighting, the attraction is off the charts! I was absolutely smitten by Bayou, the challenges he’s faced and overcome. I finished reading this book and immediately began rereading. I didn’t want it to end.

Lani Lynn Vale has such a talent for making her characters very real and have to overcome different problems while inserting lots of levity in every chapter. I am in love with her writing style and can’t wait for more.