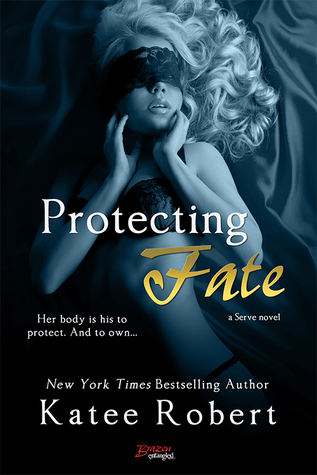 He’ll keep her safe…but who will protect her from him?

Fixer Sara Reaver is in serious trouble. She’s stepped on the wrong toes, and now her uncle is sending her out of the city in an effort to keep her safe—and he’s assigning her a glorified babysitter. The last person she expects to show up is the gorgeous Z, or for him to tempt her and then reject her in the space of a single night. Twice. Now she’s out to prove to him just how good they’d fit up together in every way imaginable.Mercenary Z Loreto hates protection jobs, but he’s willing to make an exception for his best friend’s little sister. The only problem is she calls up things he’s been doing his damnedest to keep under wraps for the last seven years. But when she pushes him too far, it all comes rushing to the fore, and the fact she’s willing to submit to his every desire only makes the loss of control sweeter.Sara and Z have a boatload of issues between them, but they’re sure they can make things work if they take it one day at a time… Right up until things spiral beyond their control. Now Z’s playing for keeps in a big way, and Sara’s got to decide if a chance at true happiness is worth the risk of repeating history.

“She was a Temptation he’d never expected and couldn’t resist. “

Protecting Fate is book six of the Serve series which is written by Katie Roberts and Tessa Bailey. This one has to do with Kaye who is the younger sister of Garrett and Will introduced in previous books by Katie in the series.Sara Reaver has one important rule in life. Never let anyone in and never fuck a man more than three times. It’s what’s allowed her to keep people at a distance. Her mother’s abandonment has shaped how she views relationships and love. But she also has a dangerous job and when her life is threatened, her overprotective Uncle hires Z, her brothers best friend, to protect her.
She’s a submissive who isn’t shy about what she wants and what she wants is Z. She’s a submissive but keeps throwing herself at him and driving him insane with desire. While he fights it at first, having been badly burned before and knowing that she is her best friends little sister, he finally gives in. The sex is hot but light in the BDSM which was fine because it wouldn’t have fit in with the rest of the story.“Please, Z. Play with me.” She went to her knees.
“Command me.” And then to all fours.
“Fuck me.”I really loved that once Z gave in, he was determined to change Sara’s mind and try to worm his way past her defenses to be something permanent. Their chemistry is explosive and I would expect no less from a Katee Robert book. I can’t wait for more.