SEE ME AFTER CLASS by Meghan Quinn 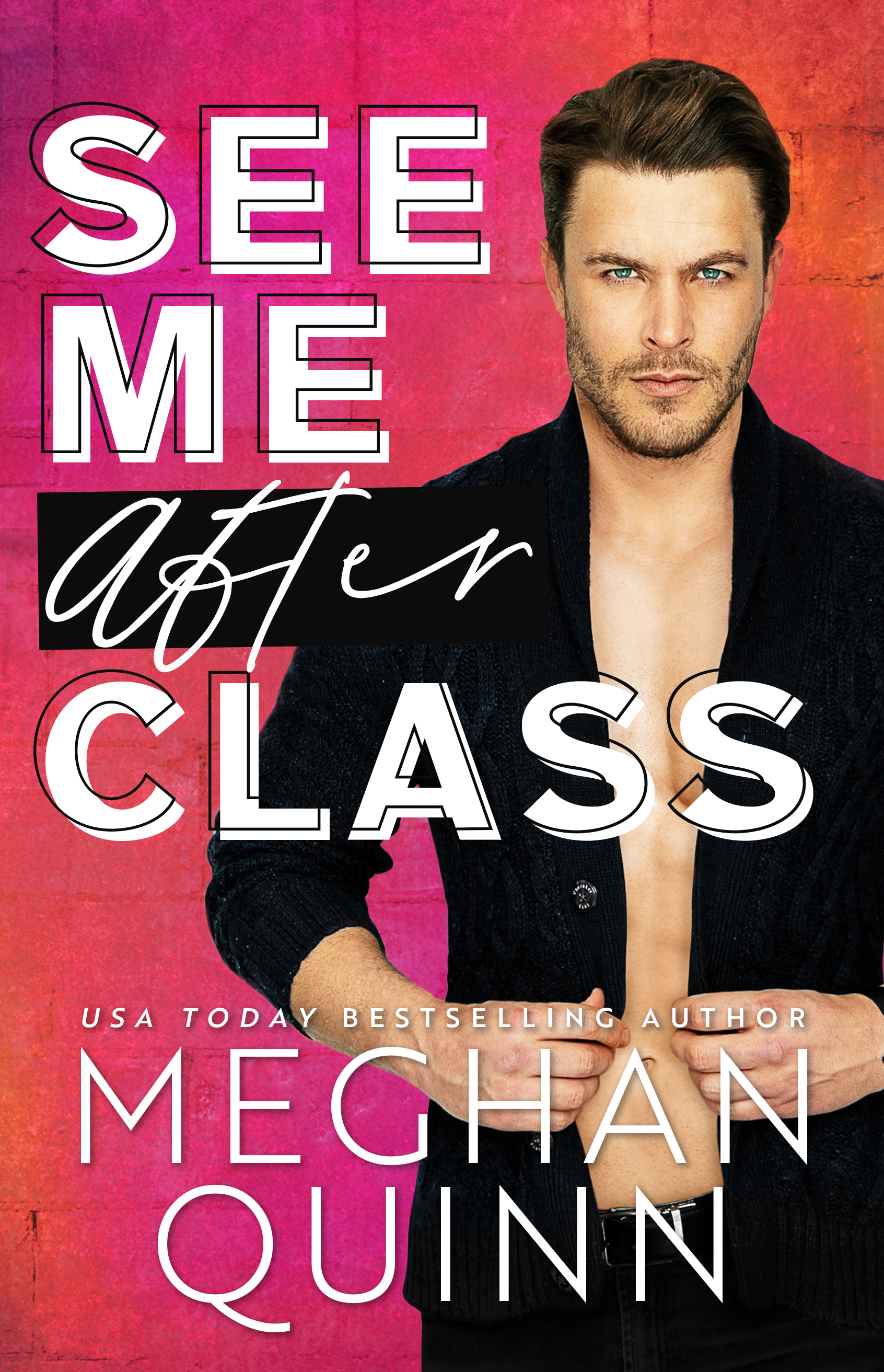 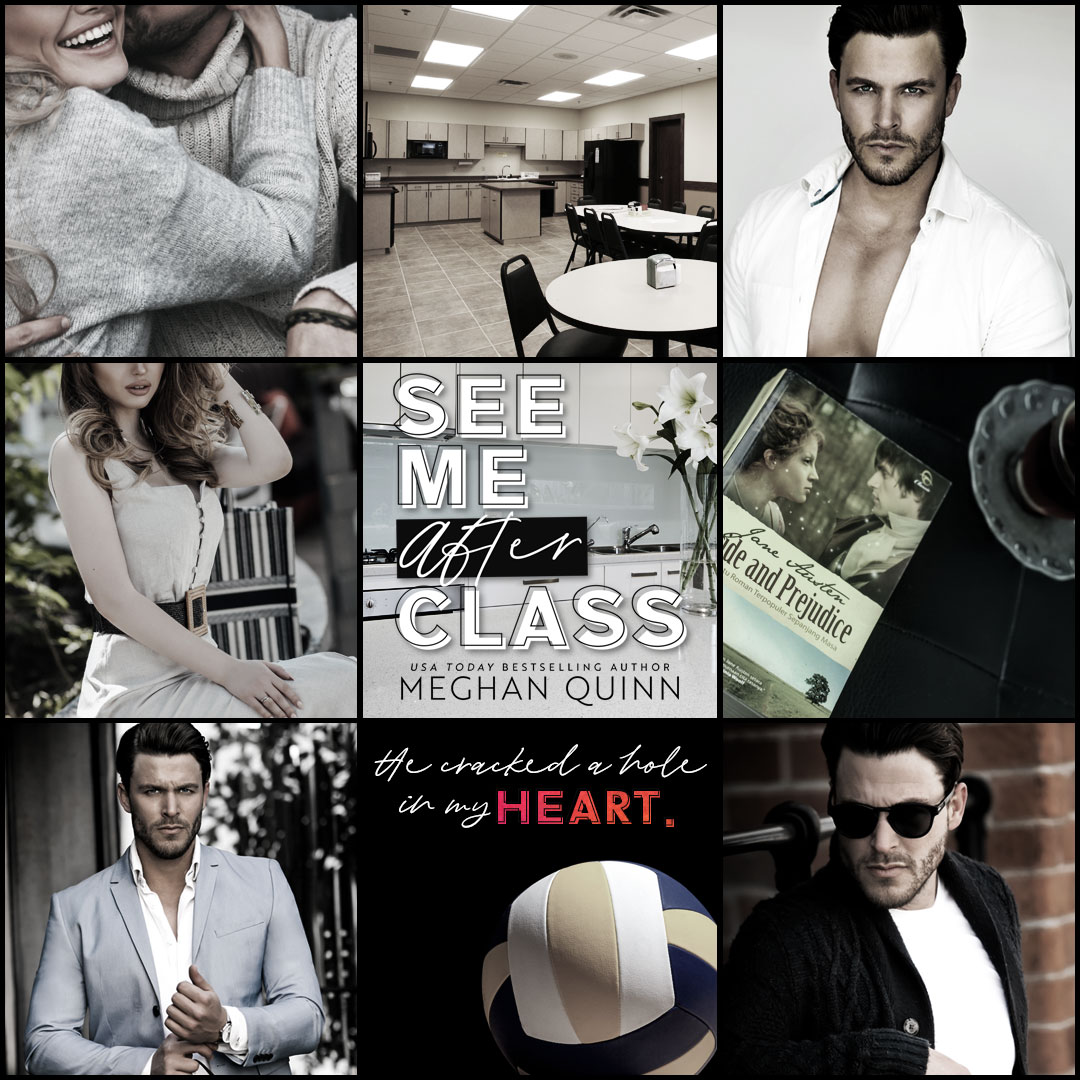 I’d like to preface this by saying it was never my intention to ever get involved in a workplace romance, let alone get involved with the most surly, agitating, and pompous man I’ve ever met who just so happens to be my new friend’s brother.

My intentions were to show students how English and reading books could actually be fun and make a new life for myself in the suburbs of Chicago.

But so far, I’ve managed to be called into the principal’s office.

Coerced into participating in the teacher’s badminton league.

And instigated into passionate fights with Arlo Turner over education and decorum while losing my underwear at the same time.

Known as Mr. Turns Me On, he’s the reason I might get fired from my first ever teaching job. 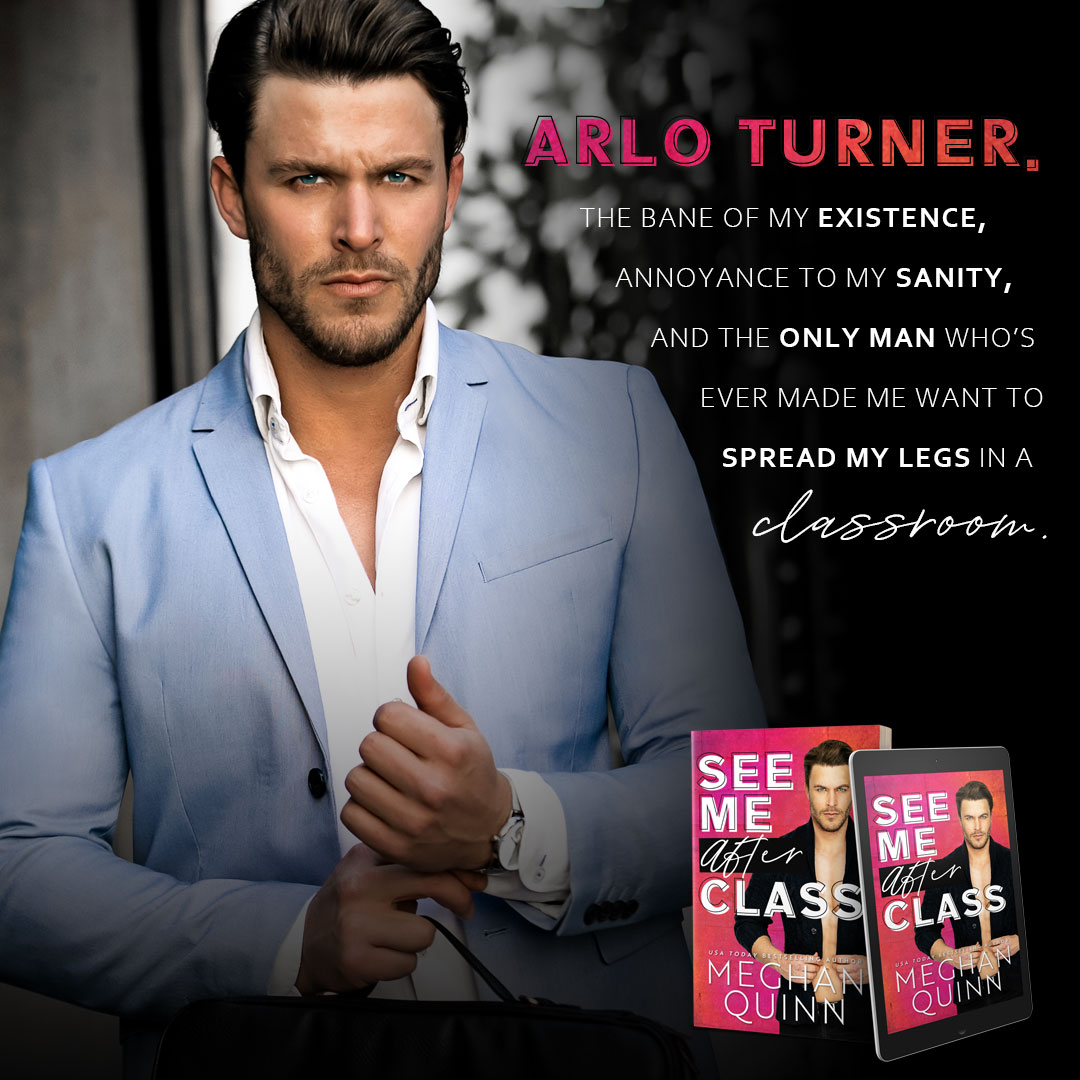 “Before we get started, I’ve been told I need to ask you a question.” Stella sits cross-legged in front of me, a nervous look on her face, water in hand.

“Oh?” I ask, trying to act casual as I bring my glass of red wine to my lips. I have a scary inkling what this might be about.

She glances over at Coraline and winces. “Uh, I feel weird asking.”

“Then why bring it up if you’re not going to propose your query?” Keiko asks impatiently while pushing her green-rimmed glasses up on her nose. “You know the frequency of these meetings is dependent upon staying within the comprehensive itinerary I composed during my lunchbreak.”

“Cool your bloomers, Keeks,” Coraline says while taking a large sip from her wine glass. “I want to know what’s making Stella so fidgety.”

The four founding members of the Ladies in Heat Book Club—aka my mismatched collection of friends—each bring diverse and unique character traits to our group.

Keiko “Keeks” Seymour—resident AP chemistry teacher at Forest Heights High School. Her social etiquette is lacking, her intelligence is off the charts, and she’d rather play with beakers than penises. She wasn’t thrilled about the book club name and made a noble attempt to explain why her suggestion, the Austen Empowerment Collaborative, was far more credible. Majority ruled, she lost.

Stella Garcia—Spanish teacher at Forest Heights and my co-coach. Currently single, makes the best tamales I’ve ever had, and is one stamp away from getting a free donut at Frankie Donuts. Can be shy at times, but when it comes to her family and friends, she doesn’t take shit from anyone. Loyal to the core, one of the reasons I adore her.

Coraline “Cora” Turner—recent divorcée and living with her brother, Arlo. Jobless at the moment and couldn’t care less about it since both she and Arlo have enough inheritance to last them a lifetime. Often annoyed by her older brother or annoying him, doesn’t partake in Twitter—says it’s a filthy pool of opinions, and is the first to offer up a bottle of wine.

Greer Gibson—twenty-four-year-old fresh to the teaching scene as Forest Heights’s new English teacher and women’s volleyball coach. I love running, have a penchant for a man in a cardigan, and can get a little noisy in the classroom while teaching. I currently share a classroom wall with Arlo Turner, Forest Heights most prestigious English teacher, and might have lost my underwear—

“Out with it, Stella,” Cora says, snapping at her.

“Please, so we can proceed,” Keeks says, straightening her notepad on her lap.

Stella looks me in the eyes and says, “Brock wants to know if there’s anything going on between you and Turner. Apparently, Turner won’t say a thing, but Brock thinks there’s some strong sexual tension building.”

Cora whips her head to me, her eyes wide. “Are you getting it on with my brother?”

Finger pointed in the air, Keeks leans in and says, “The proper term amongst company would be coitus.”
Rolling her eyes, Cora asks, “Did you have coitus with my brother?”

“You could also say intercourse if that amuses your jargon more,” Keeks adds. “Or copulating would be sufficient. But if you are inclined toward romantic terminology, since we are in the presence of the book club, you could say lovemaking or performing intimate acts. Although, given the circumstances of when coitus took place—in the work environment—I would deduce that your actions were performed carnally rather than with the interest of developing a devoted accord.”

“Good God, Keeks,” Cora says, irritated. “Who cares what it’s called? We just want to know if it happened.” Cora looks me in the eyes. “Did it?”

I’d like to preface this by saying it was never my intention to ever get involved in a workplace romance when I was hired at Forest Heights, let alone get involved with the most surly, agitating, and pompous man I’ve ever met.

My intentions were to show students how English and reading books could actually be fun, bring the volleyball team to a state championship, and make a new life for myself in the suburbs of Chicago.

But so far, I’ve managed to be called into the principal’s office.

And had passionate fights with Arlo Turner over education, decorum, and student-teacher friendships.
Not to mention I’ve lost my panties to him in my dreams more than I care to admit.

Why did this all happen?

The man dresses in a cardigan, that’s how.

Arlo Turner. The bane of my existence, annoyance to my sanity, and the only man who’s ever made me want to spread my legs in a classroom.

He’s torn down my metaphorical walls, strapped on a cottony cardigan—pushed up the sleeves—and has driven me to the brink of insanity, so now whenever I hear the mention of his name, my legs automatically spread, and my heartrate picks up.

Known as Mr. Turns Me On, he’s the reason my star athlete is struggling to keep her grades up.

He’s the reason I tend to avoid the teacher breakroom.

And he’s the reason I might get fired from my first ever teaching job. 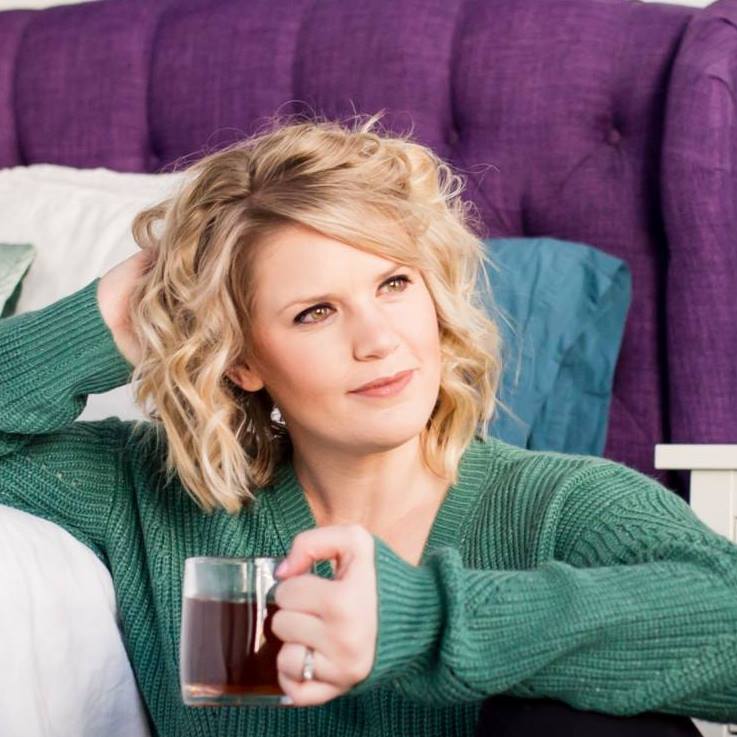 The Revenge Pact kicks off an all-new series, The Kings of Football, with an enemies to lovers standalone romance from Wall Street Journal bestselling author Ilsa Madden-Mills, coming December 4th, and we have the incredible cover! River Tate is a god on campus. The king of football. A tattooed bad boy with gunmetal eyes that […]