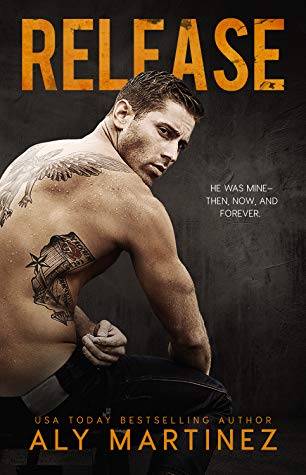 Growing up, Ramsey Stewart branded my soul in ways time could never heal.

At twelve, he asked me to be his girlfriend.
At thirteen, he gave me my first kiss.
By sixteen, we’d fallen in love, planned a future together, and had our eyes set on the horizon.

At seventeen, Ramsey was convicted of killing the boy who assaulted me.

Move on, he wrote in his first and only letter from prison.
Start a new life, he urged.
I don’t love you anymore, he lied.

There was no such thing as giving up on Ramsey. Love may have been our curse, but he was mine—then, now, and forever.

So here I am, twelve long years later, waiting for a man I don't even know to emerge from between the chain link gates.

“How long can you want somebody before you have to let go? It’s been years and I still can’t figure it out.”

What an amazing way to start the new year with a new release from one of my favorite author’s. Release is a stand alone novel by Aly Martinez that will put your heart through the ringer with a story that even after turning to the last page, will linger in your mind.

“I don’t know how to stop loving you, Thea. I’ve tried. And tried. But here we are. Fucked up and in love.”

Told in alternating POVs of Thea and Ramsey, their unique and epic story bounces from the past to the present, explaining the story of what led them to the point of Ramsey being released from prison for the murder of Thea’s attacker. While Ramsey urged Thea to let him go and live her life, for twelve years she waited, never losing hope that he would see that they could have their Happily Ever After, no matter how long they had to wait.

Our mouths moved with a practiced ease, but our tongues danced and explored like we were strangers. And in this life, I supposed we were. My heart beat for him. My lungs filled for him. My veins bled for him. But this was new and different. And, God, did I need it to be different.

Ramsey is relieved to be released but upon learning that the girl he still loved but tried to let go is also his roommate, he doesn’t know how his heart can take being around her. He was prepared for her to have moved on with her life, even be with someone else. He wasn’t prepared for her to be waiting, to still love him, even if he felt like he wasn’t worth the wait. But Thea is tenacious and she won’t allow Ramsey to push her away. She does everything she can to wear him down. But when secrets come to light, it will now be up to Ramsey to prove that what they have is worth the fight.

“There was never a day when I didn’t want you to be mine, Sparrow. I just loved you enough to hope you wouldn’t have to be.”

I can’t believe that it’s the very beginning of a brand new year, and I’ve already read a book that is absolutely a must read, new favorite book. The story line from past to present works so well to build up their story from enemies to friends to lovers. You see how much they grow, how strong their connection is and how beautiful a love like theirs is. It is a story of two soulmates fighting to be together and no matter the struggles, their story was meant to be. Thea and Ramsey, as well as his sister Nora and Thea’s father are those characters that you can not forget, the story so good that you can’t help want to reread immediately after finishing. This is the sheer definition of an unputdownable book and I loved every word and page. Aly Martinez is a phenomenal story teller and this book just proves how talented she is. Five “Must Read” Stars.