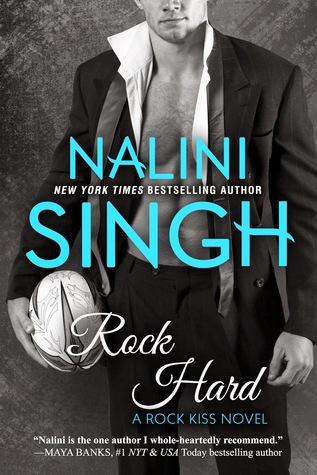 Wealthy businessman Gabriel Bishop rules the boardroom with the same determination and ruthlessness that made him a rock star on the rugby field. He knows what he wants, and he’ll go after it no-holds-barred.

And what he wants is Charlotte Baird.Charlotte knows she’s a mouse. Emotionally scarred and painfully shy, she just wants to do her job and remain as invisible as possible. But the new CEO—a brilliant, broad-shouldered T-Rex of a man who growls and storms through the office, leaving carnage in his wake—clearly has other plans. Plans that may be equal parts business and bedroom.If Charlotte intends to survive this battle of wits and hearts, the mouse will have to learn to wrangle the T-Rex. Game on.

Rock Hard is book 2 in the Rock Kiss series and while it takes place at the same time as the first book, each book can be read as a standalone.

“He smelled so good, tasted so good, his warmth surrounding her and making her feel safe and soft inside. As if her blood was molten honey.”

Gabriel Bishop is, hands down, one of the best alphas written in a long time. He is sheer and utter perfection. An alpha hero through and through and yet, sweet, patient, loving and absolutely swoon worthy. I could not put this book down, even after I finished the book. Gabriel is an ex-rugby player turned CEO who has been hired to save an ailing business, hence his nickname T-Rex, when he starts reorganizing and firing people left and right. This is where he meets the lovely Charlotte, a sweet little mouse who would normally never be his type and yet, he sees there is a fire underneath and promotes her as his assistant. He knows he wants her but can also tell that something has hurt her in the past and that he has to go slow. It is the funniest, sweetest thing to read how he’s trying to make her jealous and push her buttons when she is oblivious to it.

“You wrangle T-Rexes, don’t you?”
Scrunching up her nose at him, she fought a smile. “Only one.”
“Good, because this T-Rex is possessive as hell and does not share well.”

Charlotte is a wonderful heroine. She has been beaten and broken but refuses to make what happened in the past define her. Where most would have fallen and crumbled over what life has handed her, she’s dealt with her hand and survived, letting go of the anger that gave it more power over her. While she hides herself in the beginning of the book, Gabriel’s personality sparks her own. When he tries to be tyrannical and irk her, she throws a muffin at him. When he yells, she yells back. She struggles with her feelings for Gabriel because of her past but she has never been attracted to anyone like she has with him. She has fire and spunk even in those moments where her past is haunting her.

“You haven’t figured out by now that I think you’re fucking amazing? You have a brain that won’t quit, a smile that lights up my soul, and a body I want to do dirty things to and with three ways to Sunday.”

I honestly can’t stop gushing over this book. I just want to go up to people and say “buy it and thank me later”. I’m going to be rereading this wonderful book soon. I’m in love with Gabriel Bishop.