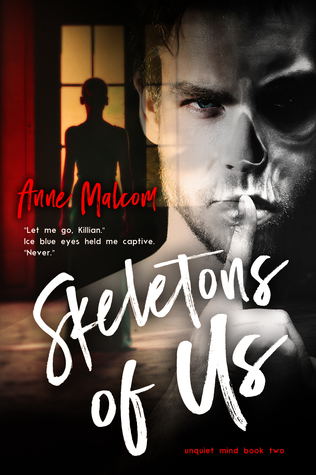 Love can be a beautiful thing. It can fill up your life with the warmth of its embrace and spread to every corner of your mind. It can quiet your soul. But when that love turns wrong, it warps into something bitter and unrecognizable. The pain of it promises unyielding noise in place of that half-remembered silence. Lexie has lived with this pain for four years, pouring it into music that transformed Unquiet Mind into the most famous rock band in the world. But fame can also turn ugly, twist into that bitter version of love and endanger everything Lexie holds dear. The moment Lexie’s life is threatened, he comes back to ensure she stays breathing. Killian. He’s not just back to save her life, he’s back to save her soul and to claim what’s his. Problem is, someone else already considers Lexie his, and he’ll kill to make sure she stays that way.

*ARC received from author in exchange for an honest review*

Gah! This book! This Series!!! I think I love this author more with every book I read. Skeletons of Us is the conclusion to Lexie and Killian’s story and really should be read in order because there is a lot to their story that is told in the first book.

I hadn’t realized until now how much I’d been hiding from myself. Not from the pain, it was impossible to hide from that, but from just how much I loved Killian. How much I still loved him. I’d numbed myself from most of it; my body had done it out of survival instinct from the moment I saw him in the hospital room. My subconscious had shielded me from just how deep that love still went after all these years. How it was coiled around my bones. And now I’d exposed it. I knew why I had numbed myself from the majority of it. Because it threatened to kill me. To destroy me.

Four years have passed since the day Killian broke Lexie’s heart, stepping out of her way so that she could follow her dream. As the lead singer of Unquiet Mind, those four years have been filled with pain for Lexie. Killian was her first love and having him push her aside has made her a shadow of her former self. When a fan turns stalker, her stepfather Zane tasks Killian to be her bodyguard. Shocked but knowing that she would do anything for her mother and stepfather’s piece of mind, she accepts.

Killian has spent the last four years regretting letting Lexie go and now that her life is in danger, there was no way in hell he was going to let go again. He would win his way back into her life again.

Damn these two. I so desperately wanted them back together but the pain, confusion, and fear that losing him again would destroy her, holds her back and it near broke my heart while these two fought to get back together.

“I didn’t miss you just because I loved you, because you are my soul, or because livin’ without seeing your smile or hearing you sing was a physical hurt that Hades himself couldn’t even reproduce in torture. No, they were parts of it. Big parts. I missed you because you’re my sanctuary. Because you were the oasis in the middle of the wastelands that my life was before you entered it. I plan on livin’ in this sanctuary for the rest of my life.”I blinked at him. “Wow,” I whispered.He grinned against my mouth. “You’re a girl who writes some of the most famous and beautiful songs in the world and ‘wow’ is the best you can do?”“It’s the only thing I can do,” I told him. “I don’t think I’ll be able to find the words that form the right response to that.” My hand moved underneath his tee, running over the ridges of his abs then downward to dip into his jeans. Killian hardened in my hands. “I guess I’ll just have to show you,” I whispered.Killian sucked in a breath. “I’m not averse to that, freckles,” he rasped.

My heart literally hurt for these characters. To have that kind of love at such a young age and have it torn apart. Theirs isn’t just young love but the loss of a soulmate, which left them both floundering in the wind. Both having this dream that someday they would be together but never acting on it until they were forced too. Ack! The angst that this book filled me with. These characters have had a grip on my heart through several books now and I’m so happy to finally have read their happily ever after.

“Don’t know what to do with this life, the one that keeps givin’ me the most beautiful gifts a man could ever hold in his hands,” he growled. “You just made me the happiest motherfucker on the planet earth, freckles. Live the rest of my life tasting the sweetness of this moment.”And then he kissed me, and I got to taste the sweetness too. Suffice to say, it was.

Check out the other amazing books in the series!!!

Check out the first book in Lexie and Killian’s story