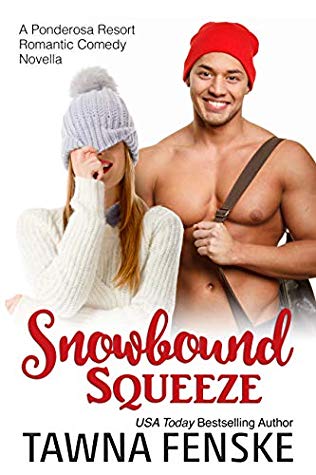 Gable Judson needs a hideout. A safe place to escape the shambles of his Hollywood life. When college pal James Bracelyn offers a secret cabin an hour from Ponderosa Resort, Gable’s got the car pointed toward Oregon faster than paparazzi pouncing on a nip slip.

Gretchen Laslo needs a retreat. Not just to work on her PhD dissertation, but to flee the messy breakup that left her inner critic shouting “duh, girl.” Meeting sexy, mysterious Gabe the night before she leaves is just another reminder to stay focused on her brain, because her heart’s kind of a dumbass.

When a Bracelyn family mix-up collides with the worst storm to hit Central Oregon in years, Gretchen and Gable end up accidental roommates. Roommates without internet or TV or—God forbid—an ice cream maker. With both hiding secrets they’d rather not reveal, whatever will they do to pass the long winter nights?

I have to say, I’m such a sucker for books with interconnected stories and characters so I love reading Tawna Fenske’s books and the Ponderosa Resort series. The cast of characters and bountiful humor in each book always make me come back for more.

Snowbound Squeeze is a novella in the Ponderosa Resort series. Gable Judson, in desperate need to get away from Hollywood after an incident that has left him rocked to his core, runs to his buddy James to let him rent out a remote cabin while he gets his head on straight. At the same time, Gretchen, also in need of quiet but to work on her dissertation, winds up in the same cabin. After having met the night before and instantly clicking, they are surprised but definitely not unhappy to be in close proximity together. And as the snow falling outside quickly becomes a major storm, the cold winter day becomes a hot and cozy night. As the two are stuck together, they start opening up about themselves. Gable though, is hesitant to tell her everything, especially what drove him to be in the cabin in the first place. He enjoys the fact that she has no idea who he is and sees just a regular guy and not the Hollywood hotshot known by so many because when his secret finally comes to light, he’s afraid that it will tear their new found relationship apart and while they haven’t known each other long, he already knows that he’s never felt anything like it before.

Their romance and feelings are quick but it works. Gretchen is sweet and quirky, who isn’t really interested in TV or movies which I totally related to. Her rendition of what she believes Stranger Things is was hilarious. I really didn’t expect the plot twist and it made me like Gable even more when I finally understood what happened to make him run. All in all, it was a sweet, funny, insta-love novella with likable characters that surprisingly packs a lot in such a small package.