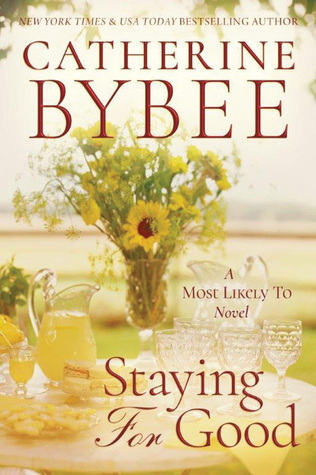 Zoe Brown may have been voted Most Likely to Never Leave River Bend, but the paper-thin walls and suffocating air of her family’s double-wide trailer were not what she wanted for her life. Other than BFFs Melanie and Jo, the only thing that kept Zoe sane during high school was her boyfriend, Luke.She didn’t just leave, she escaped—turning her back on the shame of her black-sheep siblings and imprisoned dad. Now a celebrity chef in Dallas, she can afford all the things she never could have growing up. But when she returns to rustic, ruggedly beautiful River Bend, Zoe has to face all that she abandoned—including Luke.While Luke was a refuge for Zoe in the past, he knows they inhabit totally different worlds now. Anchored by his parents and his job as a mechanic in his father’s shop, Luke never felt the urge to leave River Bend—until Zoe’s return.But when the two rekindle their old flame, Zoe is forced to make the hardest decision of her life: remain in River Bend and confront her past before it destroys her, or say good-bye to everyone she’s ever loved…again, this time for good.

Staying for Good is book two in the Most Likely To series and this series just continues to surprise me. The characters have had a piece of my heart since the first book and had me aching for the next book in this series.

Zoe Brown escaped her small town life and suffocating family after graduation, leaving her two best friends, the sisters of her heart, and her loving boyfriend Luke. Now a celebrity chef, she has everything she could ever dream of except for those she left behind. When she returns to Bend for her 10-year reunion, the love that she has for her friend’s and Luke, begin to remind her of the good things she left behind. But with her family drama that continues to make her want to run back to Texas, will she ever want to come home?

“I don’t want to hurt you again, Luke.”
“I was a boy when you left. I’m a grown man now.”
“I live in Texas. My life is there.” He nudged her closer with a slight tug of his fingertips.
“I know where you live.”
Zoe looked up at him; the tip of her tongue moistened her bottom lip. The teasing smile she often wore was all but gone.
The moment he felt her hand find his waist, his world came into focus.
“This isn’t smart,” she uttered, her lips reaching toward his.

Luke has been in a sort of limbo since Zoe left 10 years ago. While he’s never had a desire to leave River Bend, a second chance with Zoe has him reconsidering his path. Especially since the possibility of losing her again may just destroy him. The fire between the two never died, and they can’t deny that the feelings they had for one another as teenagers have only grown into more. Luke is sweet and has the sexy boy next door feel that you can’t help root for him to win Zoe’s heart again.

…she ran a fingernail over his bare hip in hopes of tickling him enough to roll off.
His chest rumbled. “Starting something?”
She flattened her hand. “You’re awake?”
Luke shifted his hips, and a warm part of his anatomy told her just how awake he was. “A warm, wiggling, naked woman in my bed has a way of getting me up early.”
Her hand brushed his erection. “You’re insatiable.”
Caging her hips in his hands, he pulled her on top of him.

The friendship between these three ladies, the family drama, the small town feels, everything clicked so beautifully in this book. I don’t remember the last time I loved a small town series like I have this one. And that ending! I can not flipping wait for the next book. It’s not a cliffhanger but it is a fantastic lead way to the next book that will whet the appetite.

5/5 for this small town contemporary romance.

Tags: Catherine Bybee, Most Likely To, Staying For Good