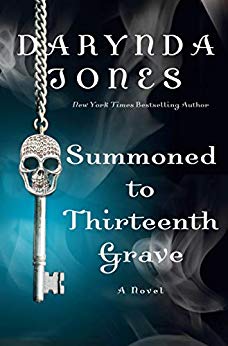 Charley Davidson, Grim Reaper extraordinaire, is pissed. She’s been kicked off the earthly plain for eternity – which is the appropriate amount of time to make a person starkraving mad. But someone’s looking out for her, and she’s allowed to return after a mere hundred years in exile. Is it too much to hope for that not much has changed? Apparently it is. Bummer.

She’s missed Reyes and her daughter, Beep, but now that she’s back on earth, it’s time to put to rest burning questions that need answers. What happened to her mother? How did she really die? Who killed her? And are cupcakes or coffee the best medicine? It all comes to a head in an epic showdown between good and evil in this final smart and hilarious novel.

*ARC provided by the publisher in exchange for an honest review*

“A lot of days I truly expect my horoscope to say, “Just don’t kill anyone today.”

So before diving in to the final (*sob*) book in one of my favorite series, I went back from the beginning and read and also listened to each of the books. Let me just say, if you haven’t listened to these in audio book, Lorelei King is Queen of narrations and you are sorely missing out. She’s a Goddess and does a phenomenal job of bringing these characters to life, especially Charley. Darynda is an extraordinary story teller and Lorelei does justice to each and every book and character. So why exactly am I rambling on about this? Having gone over these books multiple times, I sort of saw where this final book was going to go, especially how it ends. While it might be the Charley Davidson series, let’s face it, this is Beep’s prequel.

I figured I’d annoyed him, but when I looked up, he had an affectionate expression on his face. Tender. Almost amorous. Amorous enough for the pitter-pats of my heartbeats to trip and pile into one another.
Rising onto my tiptoes, I eased close until we were nose to nose. “If you’re going to look at me like that, Mister Man, we may have to go back to HQ and try out that other cot.”
A wall of heat crashed into me. He backed me against the stone exterior of the building and pressed his lean body against mine. “You like playing with fire,” he said, stating the obvious.
“If that’s not clear by now, gorgeous, I’m not sure what else I can do to convince you.”

When we last left our heroine Charley, she had committed the ultimate of faux pas, the big no-no. Saving young Amber’s life cost her dearly and she was thrust into limbo by the powers that be for over a hundred years. When she’s finally released, Reyes informs her that only 10 days have passed, and the world is in chaos. The hell dimension was taking over the world with Albuquerque, New Mexico as the epicenter of it all. But first, well, Reyes has to great her properly now, doesn’t he *wink*.

The apocalypse is coming and the demons are ready to party. It’s up to Scooby and the gang to figure out how to stop it as the demons take over the souls of the living. Good times. Charley, with her wit, sarcasm, and multitude of caffeinated beverages, will have to figure out how to save the world again. Her first stop, investigating her own mother’s death, having been given a clue that finding out what happened the night she was born may be the key to saving them all.

“A day without coffee is like…Just kidding. I have no idea.”

The 13th book in this amazing series had twists and turns, some that I did not see coming at all. But every page from the series was leading up to those last moments of how to keep Beep safe and help her fulfill her destiny. Those last two words though…oh my God!

I’m not going to lie. I cried when I finished and throughout parts in the book. I can’t believe I won’t have any more Charley books in my life. Every time one releases, a feeling of joy came over me. What will I do without funny chapter headers, Charley’s snark and Reyes sexiness in my life anymore? It is so bittersweet to finally know what happened, but it’s hard having to let go of these characters that have a huge chunk of my heart. I will be waiting on pins and needles for any news on Beep’s story. There’s so much that can happen with that story line! Will it be YA? Will she have Charley’s snark and Reyes ability to charm everyone? There’s so much that can happen and I love that, while this series may be over, these characters have a chance to continue on in the future.