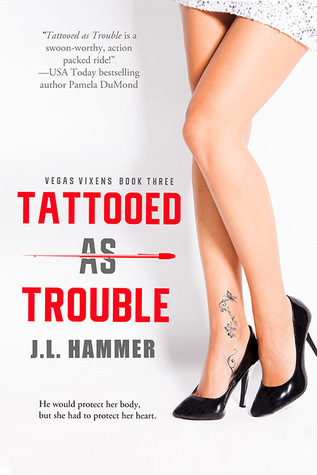 For Raegan "Rae" Storm, the trouble in her life is as permanent as the tattoo stamped on her shoulder. After witnessing a double murder, she becomes the target of a bloodthirsty mafia and enters the Witness Protection Program in exchange for her testimony. With her life on the line, the last thing she expects is to lose her heart to the mysterious, handsome Quinn Bronson, the U.S. Marshal protecting her.

Driven by honor and his commitment to his job, Bronson rescues Rae from threats time and time again, but fighting off hit men is easier than ignoring his attraction for the one woman he should never desire: the witness. As danger presses in on Bronson and Rae, neither knows whom they can trust, and their forbidden love could be what destroys them.

*ARC received from Netgalley in exchange for an honest review*

I read this book and I’m conflicted as to how to review. On the one hand, I loved the premise and I love a good bodyguard book. On the other hand, there were a lot of parts of this books where I couldn’t connect with the story or characters.

I liked Rae and I felt bad for everything she was going through. To have to be thrown into Witness Protection Program after being in the wrong place at the wrong time and having her life turned upside down is sad. But Bronson, her very sexy US Marshal in charge of keeping her safe, kept dragging the story further down. He has an instant distrust over Rae because of a past mistake he made and takes it out on her. For about 85% of the book, he’s shoving her away with every word and action. I can understand the lack of trust in the beginning of the book but after awhile, I just did not like him and he began to annoy me. Grow up, dude. Then there’s Rae, who, even though he keeps shoving her away, tells him she loves him but I don’t know why. It started feeling like Stockholm Syndrome. I just wish she had a little more backbone and wasn’t so hung up on Bronson to see that he had no reason to be shoving her away or making her feel she was worth less than she was. If she had fought back just a little, maybe make him open his eyes, I think it would have made the story a little more believable and make me like her more. Even give Bronson a redeeming moment in the middle of the book rather than the very end. I needed more time with them as a couple so that I can feel like they would actually have a chance, even with their HEA.

Long story short, I wanted more Rae and Bronson, rather than Rae vs Bronson.