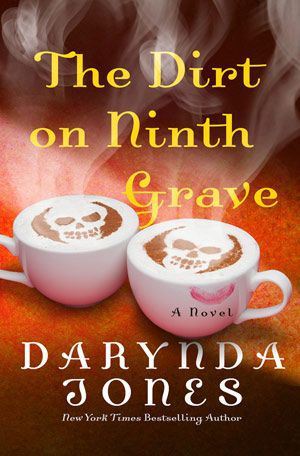 In a small village in New York Charley Davidson is living as Jane Doe, a girl with no memory of who she is or where she came from. So when she is working at a diner and slowly begins to realize she can see dead people, she’s more than a little taken aback. Stranger still are the people entering her life. They seem to know things about her. Things they hide with lies and half-truths. Soon, she senses something far darker. A force that wants to cause her harm, she is sure of it. Her saving grace comes in the form of a new friend she feels she can confide in and the fry cook, a devastatingly handsome man whose smile is breathtaking and touch is scalding. He stays close, and she almost feels safe with him around.

But no one can outrun their past, and the more lies that swirl around her-even from her new and trusted friends-the more disoriented she becomes, until she is confronted by a man who claims to have been sent to kill her. Sent by the darkest force in the universe. A force that absolutely will not stop until she is dead. Thankfully, she has a Rottweiler. But that doesn’t help in her quest to find her identity and recover what she’s lost. That will take all her courage and a touch of the power she feels flowing like electricity through her veins. She almost feels sorry for him. The devil in blue jeans. The disarming fry cook who lies with every breath he takes. She will get to the bottom of what he knows if it kills her. Or him. Either way.

ARC received via NetGalley in exchange for an honest review

If you follow me on my Facebook page, you know that I fell in love with this series last year having binge read and listened to the audio books in about a month. They’re that amazing. Funny, witty, sarcastic and charming, every chapter beginning with a signature chuckle and every page just as funny. These books are filled with lovable characters that make you wish that you were part of their world so you can hang out and grab some coffee, and hopefully have a chance with one of the sexy males.

Book nine of the series begins much like the first. Lovely Charley Davidson has no idea what she is but this is because of what happened in book eight. This time, however, our poor Charley has amnesia and has no idea who she is either. The trauma of what happened has wiped her memory and the gang has to help her get it back, without interfering and actually telling her. Charley, now known as Janey, is working as a waitress in Sleepy Hollow, NY with Cookie and struggling to remember who she is.

“I think I’m a savant. I might be an astronomer. Or a mathematician. Or that guy who invented Friendbook.”

Good try Charley, but no. While she might struggle to remember who she was, she can’t help but be Charley. Helping others, seeing the dead and helping them pass, somewhere deep inside, Charley is still there. The most important part; while she may not remember who he is, she knows that Reyes is hers.

“…I woke up in love. It was ingrained in my DNA. I loved Reyes Farrow. I craved him, and there was nothing I could do about it.”

Sigh. There is so much I love about this book and series. The friendship between Charley and Cookie glow as bright as Charley herself. Her love for her Uncle Bob, Garrett, Osh and Angel are so sweet. And, of course, who could forget Reyes Alexander Farrow. The name that brings shivers down your spine and tingles in other places. Oh my. Darynda outdid herself with the sexy parts. I, of course, always want more, but this story is about Charley finding herself so while she took advantage of Reyes (wink), she has people to save. She is Charley, you know.

That ending…holy crap. Darynda never disappoints. I always want the next book and there is no question that I am already dying for book ten. In the meantime, I’ll be listening to Lorelei King reread the story for me and do an amazing job. 10 stars for my favorite read of 2016.

“Reyes hooked an apron over his head, wrapped the ties around his waist, and folded them into a neat knot. The muscles in his forearms flexed with each movement. His biceps contracted and retracted with the minuscule effort. How could any man look as good putting on clothes as he did taking them off? We leaned our heads together and admired the view until he turned toward us. At which point we jumped on the task at hand. That task consisted of Cookie grabbing a towel and polishing the lid of a salt shaker and me straightening napkins. Gawd, we sucked at improv.”