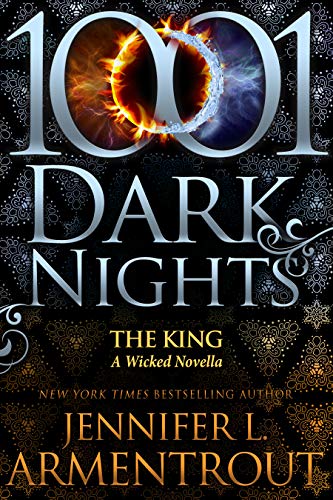 From #1 New York Times and USA Today bestselling author Jennifer L. Armentrout comes the next installment in her Wicked series.

As Caden and Brighton's attraction grows despite the odds stacked against a happily ever after, they must work together to stop an Ancient fae from releasing the Queen, who wants nothing more than to see Caden become the evil Prince once feared by fae and mortals alike.

*ARC provided by InkSlinger in exchange for an honest review*

“I saw you smile once, and it was like the sun finally rising.”

The King by Jennifer Armentrout is set in the world of the Wicked series. This is very much not a stand-alone and builds upon what happens in the first few books. I’ll admit that it had been a while since I had read them and I needed to jog my memory a bit before I dove into The King. Saying all that, Oh MY God!!! Literally, I turned to the final page and just keep uttering OMG. This was also interjected with many swear words. For a novella that was just under 200 pages, I did not expect the amount of feels and it took me by surprise!

So this book takes place shortly after The Prince, who was Caden, who is now King. Mouthful. And being King, I honestly didn’t think that he and Brighton would have a prayer being together. Royalty and the Order don’t mix. Brighton is part of the Order, although because she is human, she is treated as less than capable when it comes to going on missions. But she is determined to kill Aric after what he did to her mother. Caden also has his own agenda when it comes to Aric and wants Bri to stay out of it. These two butt heads as Caden wants to keep her safe and Bri is out to prove herself. When they clash, it is explosive and the attraction and chemistry they’ve been fighting can’t be denied any longer.

“The kiss… Caden’s mouth moved against mine with lust-soaked intensity. He kissed—God, he kissed like a man starving. He kissed as if he were going to devour me.”

I don’t think I even blinked until I finished the book. Jennifer loves to torture her readers and she did a phenomenal job in doing so in this book. The middle to the end of this book wrecked me and just when I thought she can’t wring any more tears and pain out of me, she ends it with the cliffhanger to end all cliffhangers and I’m left hovering in the end, not knowing what to do with myself (insert more swear words in multiple languages).

I love how much Brighton grows in this book and I love how Caden finally opens up to her but jeez, if I don’t get the next book ASAP, I may cry.