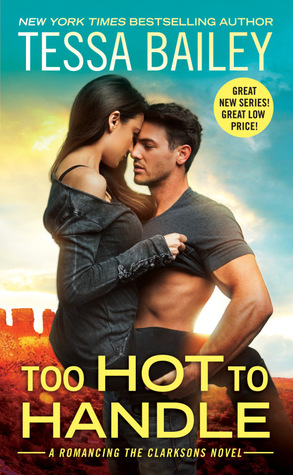 When Rita Clarkson's Suburban takes its last breath on a New Mexico roadside, rescue roars up on a Harley in the form of smooth-talking honkey tonk owner, Jasper Ellis, a man as mysterious as he is charming. Rita's cross-country journey to New York City--with her three estranged siblings in tow--is only beginning, but now that Jasper has found Rita, his plans do not include her leaving.

*ARC requested from Netgalley in exchange for an honest review*

A new series by the ever talented Tessa Bailey and I can not wait for the next one. This is a story about a family who’s lost their way and while trying to fulfill their mother’s last wish, will have to take a journey not only to reconnect, but to rediscover who they’re meant to be. But these four siblings could not be less alike and their family bond isn’t there. They have a long rode ahead of them but on their way to New York to hang with the Polar Bear Club, their car breaks down and they wind up in New Mexico where Rita meets Jasper and has an instant connection with him. Ooh the sparks that flew! They fairly vibrated from the pages.

“This is what’s going to pass for conversation tonight. Small talk will be my tongue flicking against your clit until you cry out my name like a swear word. My headboard slapping the wall is going to be our heart-to-heart. And that gorgeous body riding my dick is going to be our nighttime prayers. You with me, Rita?”

*Fans self* So yeah. Jasper. Le sigh. Brain went into complete mush. You know a scene is hot when you have to stop reading because you’re on the train, surrounded by people, and can’t stop blushing so you have to put the book to the side until you get home.

Holy shit!! Can you say HOT! Jasper has one filthy mouth and knows how to use it. Those were some blistering scenes. Jasper is a reformed manwhore…yup, you read that right. Tired of being a manwhore, he’s looking for something more, something permanent. And Rita, well, she’s had a hell of a time. Burning down her mother’s beloved restaurant, brandishing a knife on tv (I would’ve too. I didn’t blame her. I totally would’ve cut a bitch) and fearing that she will always live in her mother’s shadow, life has taken some serious turns that she never saw coming. So when she meets Jasper, she really has no idea what to do. She has a serious connection with him but she promised herself that she would take this journey with her siblings and honor her mother’s wish, and she’s torn. These two have some serious back and forth, we want to be together but can’t be, the entire book.

I loved Rita’s siblings and the tension they had between them. There’s so much that they don’t know about one another and you can tell that this is just the beginning of them becoming a family together. And holy moly I wanted to know what happened to each of them, especially silent Belmont, the oldest brother. I’m on pins and needles for the next book. Well done, Ms. Bailey. I’m looking forward to the next book.

Tags: Romancing the Clarksons, Tessa Bailey, Too Hot to Handle