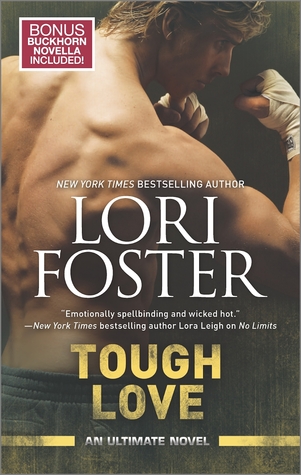 She's playing hard to get… to win the MMA fighter of her ultimate fantasies in a sultry new novel from New York Timesbestselling author Lori Foster…Vanity Baker loves a good, clean match, but she's not above playing a little dirty. She's wanted Stack "The Wolf" Hannigan from day one. Seems as though the best way to corral the famously commitment-phobic fighter is to insist on keeping it casual. And her plan works—deliciously well—until Stack's past steps out of the shadows. Stack learned early to stay free of attachments. But with sexy, forthright Vanity, he's the one always left wanting more. Then his troublemaking family comes back into the picture, threatening everything Stack cares about—Vanity included. Suddenly he realizes they're much more than friends with benefits. He's ready to go to the mat for her…but will it be in time to protect the woman who's tamed him for good?

I’ve been a big fan of Lori Foster’s books since I read Causing Havoc when it first came out. She was the first author that made me fall in love with fighters and I’ve adored each of her books. Her characters are strong, alpha heroes who know how to treat their women and there’s just something extremely sexy about each of them that pops right out of the book. While each book is a stand-alone, you get so much more out of the story when you read them in order. I actually read this one first and then went back to the previous two in the series. I never felt like I missed something having read this one first, but I definitely felt like I got more out of the story once I read the others.

Vanity Blake has had her eye on sinfully sexy Stack “The Wolf” Hannigan for a while now but believes that if he ever finds out that she has feelings for him, he’ll run for the hills. If you read the previous book, you’ll see that Vanity comes up with a plan to make Stack be her date for their friends, Cannon and Yvette, wedding. She also promises him an extra fun time after the party *wink wink*. Some casual loving between the two where they would remain friends afterwards and hopefully the commitment shy Stack won’t refuse. Stack has also had his eye on her gorgeous curves and would be more than happy to sink into them.

“I met you and fell hard. Almost from the day I met you, I knew I wanted you. Within a few weeks, I was in love. But you never paid any attention to me, so I decided to proposition you.”

Stack quickly realizes that one night is not going to be enough for either one of them. Thus begins their friends with benefits relationship. Their chemistry is hot, the scenes are scorchers and both quickly realize that there are more feelings than either expected. Stack is gun shy when it comes to relationships though. His hot button is honesty and if that trust is lost, he has a hard time putting his faith in that person again.

Vanity is determined to do everything and more to make a relationship work between the two. She’s sweet, strong and independent, not to mention wealthy enough not to have to work a day in her life ever again. She’s also lost her entire family at a young age and yet she never does the “woe is me for I am all alone in the world”. Rather, she takes everything in stride and makes friends and sees the good in people. She grows attached to Stack’s family and tries to help them out, which bothers him since he doesn’t want them to be mooching off of Vanity and doesn’t want Vanity to go behind his back to help them out. Especially his sister, who can’t seem to see her husband for who he really is. A deadbeat, waste of space, who is dragging her down with no shovel to help get them out of the hole he’s dug. He’s not a good person and quickly goes from being a minor nuisance to a giant problem.

Drama ensues, faith will be tested and sex will be had, in another amazing installment in the Ultimate Series. This also gives us a fantastic opening to the next book and one that fans have been dying for since the first book. I’ve already pre-ordered Armie’s story and am anxiously waiting for it.