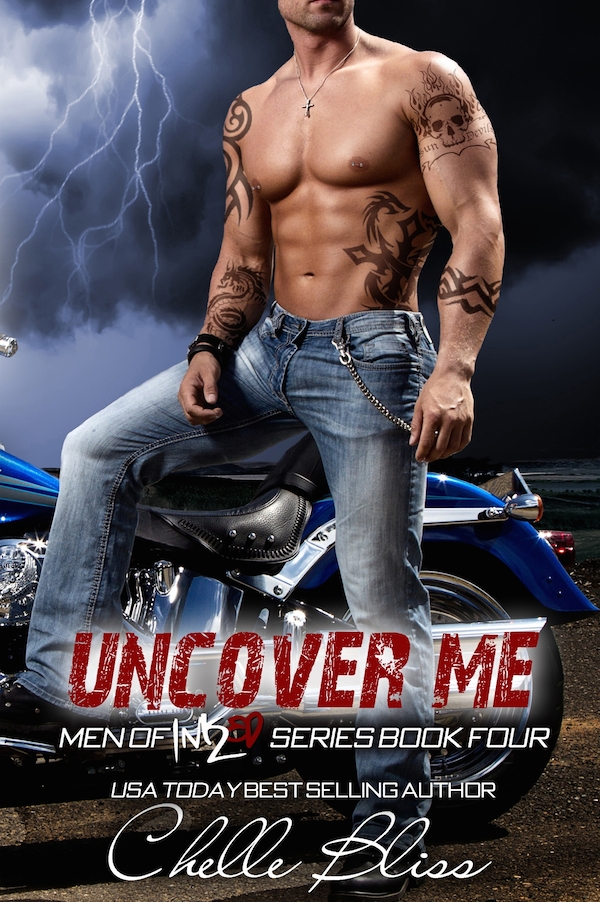 I lost track of my life.

Spiraling down the rabbit hole, I lost myself and became one of them. Living undercover within the MC, the days bled together as I became absorbed in a life of excess and violence.

Was I Thomas Gallo, good guy and respected cop or Blue, Sergeant-at-Arms of the Sun Devils MC?

Before, I could answer with certainty. But now, there’s a darkness that has settled deep in my soul, fusing with my heart and altering my reality forever.

The road I’ve traveled has been paved with danger, death, and deception.

Roxanne grew up as part of the MC, a victim of her birth. Her life has been treacherous, setting her on a course of torment and destruction.

When our worlds collide, secrets are revealed. Trying to save us from damnation, I fight for redemption and the woman I love.

Uncover Me is the long awaited story of Thomas, the undercover brother infiltrating an MC gang that we’ve had small glimpses of throughout the series. Now if you haven’t read Izzy’s book, Resist Me, these two stories merge at points so I would warn readers to read that first before diving into Thomas’ story. You’ll have some spoilers if you don’t. With all that being said, this is another great read in the Men of Inked series which I loved. This is a a bit of a darker read compared to the others because of who he has to portray while undercover but I think fans of the series are certainly expecting it to be as I did.Thomas has been undercover for the DEA, working to infiltrate an MC gang that has dealings in everything imaginable. Little did he know how much it would cost his very soul to do. He misses his family and the lines have begin to blur as to the kind of person that he is. Can he really be so good when he’s forced to do so much, just to keep his cover? The one light that he has is a woman named Roxy who he meets during his stint.“Roxy was my true north in this fucked-up life. She was the good in all the bad, fucked-up bullshit of MC Life.”She has no idea who he really is, just that for the first time in her life, someone gives a damn about her. She knows that her time with him may be limited with the type of life she believes he leads and clings to the moments that they have together, wishing for more, wishing for things that she never has before. A home, a family, and someone that can love her despite all the shit of her childhood and present life. “Falling further into the fantasy, I let myself get lost in his warmth, enveloped by the only man to have ever stolen her heart.”I want to keep this as spoiler free as possible. So many things happen because of Thomas undercover so a good half of the story will be focused on this and it was damn good. We, of course, also get plenty of the Gallo family themselves and the love that this family has emanates from the book. Throughout the series, these are probably some of my favorite scenes. Just these moments that they have, gathered around the table so to speak, and that very strong family bond that they have. Each of the kids are being paired off and the family growing. We also get that peek into the last Gallo hold out, Anthony which is set to release this year. Of course, the best parts of the books, the swearing and traumatizing of various family members when the conversation leads to sex. “Child, how do you think we got five kids?”“You’re like the virgin Mary, ma.”“Not after your father got his hands on me.” Can you see why I love this book and series?! Chelle Bliss has such a talent for writing these laugh out loud scenes. Izzy and Anthony have no filter when it comes to what’s on their minds and it just makes life in the Gallo home that much funnier. Another great installment in the series, Ms. Bliss.