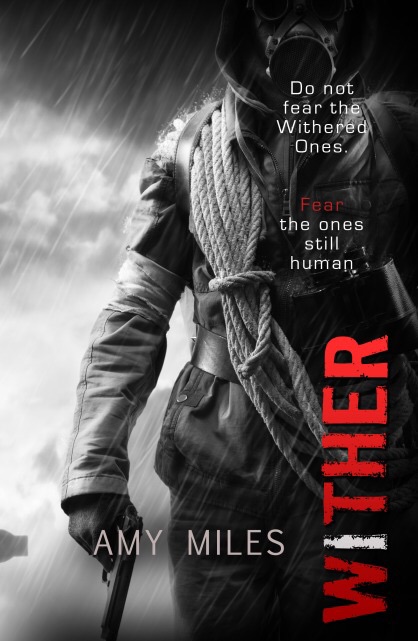 I always thought when the apocalypse finally began I would be swinging my baseball bat with the best of them, in true zombie slayer fashion. I was prepped and ready to smash in some heads if the need ever arose.

The problem is...no one ever warned me that I would have to fear the humans instead. The ones who still remember their names and how to put a gun to your temple when they want something.

The others...well,they pretty much keep to themselves.

Wither is a psychological thriller that poses the question...what if the zombies aren't the ones we should fear? What if it's human nature instead?

How far would YOU go to survive just one more day?

Do not fear the Withered Ones. Fear the ones still human.

“This world isn’t lost until we give up on it and I’m not about to do that.”

If you’re a fan of well written, end of the world filled with zombies, and blurred lines of good and bad, drop everything and pick up Wither. I enjoyed every second of this book and am definitely looking forward to more. Action packed from the first page to the last, Wither is a book of survival. When the world comes crumbling down, who will make it out alive and what will be the cost.

Avery Whitlock never had an easy life, even before the world went to hell. A father that walked out on her when she was a kid and a mother who never really cared, Avery is bitter and world weary. It’s been a week since life has changed.
“Death swept across our land like a biblical plague.” And while the government tried to find an answer, they created another problem. Neither dead or alive, the Withered Ones roam.

Quarantines and martial law, the Withered Ones are the least of everyone’s worry. When a cryptic message alludes to a possible cure, desperation and fear causes people to change, friends turn into enemies and people are enslaved for the good of all mankind. Avery will have to grow and learn to trust others even though every instinct she has tells her not to.

Avery ~ “None of those things matter anymore, Cable. There is no good left in this world. Only greed. Only murder and evil and nothingness.”
Cable ~ “You’re wrong….You and me, we’re still good.”

Avery grows in so many ways throughout the book. From a mildly bratty girl to a strong young woman, she learns to let others in, to feel more than she’s let herself in a long time. Cable slowly worms his way in to a heart she’d believed cold and hardened. And there’s no way for the reader not to fall in love with him too.

Along the way, allegiances will be made, the world will change, and only the strong survive. Because the Withered Ones are evolving and the world might never be safe.