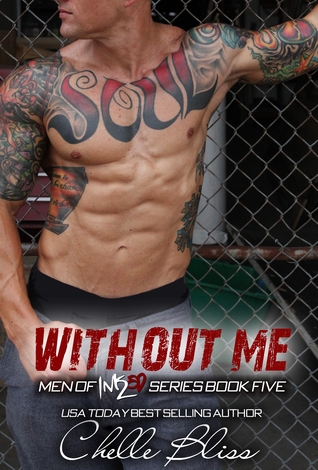 I’d led a selfish existence. I liked who I was. Hell, I loved myself. Women threw themselves at me and I took what they offered without remorse. I promised them nothing. I sank my teeth into life, holding on to the bitch like my very existence depended on it. Time passed. Women came and went. The second I let my guard down and released the hold I had on life… What was my award for such carelessness? A love so spectacular and heart wrenching that it threw me for a loop. When I was in too deep to escape, my greatest fears became reality. This is my story. My downfall. My salvation.

It’s a bitter sweet end to a series that I’ve come to love from the very beginning. The Gallo family has gone through its ups and downs, falling in love and risking their lives along the way. Now, it’s older brother Anthony’s turn and I have to admit, I wasn’t sure if I cared enough about Anthony to read it. He’s a cocky asshole and his motto is love ‘em and leave ‘em. He constantly made me want to smack him upside the head and I mentally thanked Joe every time he did it. I should have known that Chelle would prove me wrong.

“Only I, asshole and cocky fucker to the masses, would fall in love with the one woman who wanted nothing to do with me.”

Anthony, the oldest Gallo and the love ‘em and leave them panting for more hunk of a man, has finally met his match. Maxine is a no nonsense, not going to take your shit, kind of woman (think Izzy but sweeter) and throws Anthony for a loop, big time. The moment they touch, sparks fly, and Anthony knows that he wants her in his bed. NOW! He didn’t take into account that she’s the first woman who, after a serious night of hot and heavy passion, tosses him out on his ass and has him scrambling. Oh, I so love that he got a taste of his own medicine. She’s the first woman that he feels something more for and actually wants to date, not just hook up, and she keeps pushing him away. She wants the benefits without the attachment and keeps giving him excuses as to why they can’t be more. She tells him that her family won’t approve because he is white and she is black but when her mother comes over and speaks to Anthony, the jig is up since mom has no clue who he is and no problem with them being together.

“I had accepted my future until I met you. Meeting you made me curse the gods and question my faith, Anthony.”

“I didn’t do anything to you, but love you.”

Max is running scared. She’s spent so long trying not to get emotionally attached to a guy and in walks this cocky asshole to make her wish that life was different. Now here is where my review gets just a tad spoilery but there’s no real way around it. Max has a reason for pushing and pulling Tony. She believes that not only is she protecting her heart, but his as well .Her father passed away from a debilitating disease and there is a chance that she can have it too. She fears falling in love with someone and being a burden down the line as the disease has no cure. My heart broke a little as Max is so scared of something that may or may not happen, but the death of her father, of him slowly and painfully passing, has scarred her. Tony is a Gallo, and he refuses to be dissuaded by anything, especially her stubbornness. She might try to push him away but he fights her tooth and nail to get her to see that even if some day she becomes sick, he will stay by her side. The Anthony from the prior books almost does a 180 when it comes to how he is. He’s still an asshole and cocky as hell but he’s found his other half and hell if he’s giving her up. Oh man. I totally never thought I’d say this (or rather, write this) but I love Anthony. Yup, I just said it.

I have adored this entire series, every page, every character, beginning to end and Mike might have to move over as favorite Gallo. I love how the book ends and we see a few years into the future with the family growing and each of them having kids to give them hell. I so hope that we continue to get novellas of the family. I would love to read Christmas with the Gallo’s or something equally awesome. I am sad to see them go but excited for Chelle’s new series as there will be glimpses of the family.

Tags: Chelle Bliss, Men of Inked, Without Me